What unites the fluff and the neutron star? 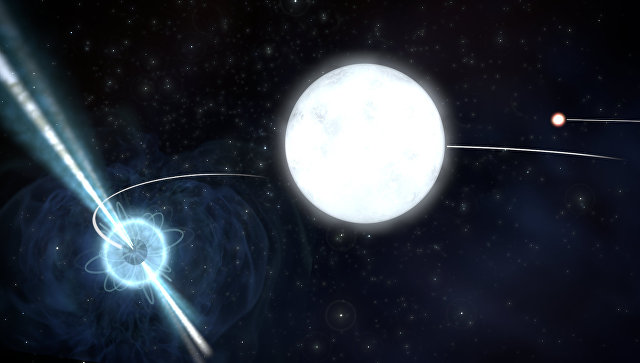 Scientists compared the speed of falling of a fluff and a neutron star, the densest object of the Universe, and did not find a difference between them, which once again confirmed Einstein’s theory of relativity. Their findings were published in the journal Nature.

“If there is a difference between them, then it is no more than three parts per million.” Now the supporters of alternative theories of gravity will have to drive themselves into an even narrower corridor of meanings in order for their computations to coincide with what we observe, “says Nina Gusinskaya from the University of Amsterdam (Netherlands).

Gusinskaya and her colleagues conducted the strictest and most remote verification of the so-called equivalence principle, one of the foundations of Einstein’s general theory of relativity.

This principle, in the most general and simplified form, states that light particles having different wavelengths should arrive to the Earth at the same time, even if they have passed through powerful gravitational fields on the way from a distant star or other object. Similarly, other things should behave, starting with balls and fuzz from the famous experiments of Galileo and ending with energy clots.

The principle of equivalence has been repeatedly tested with the help of probes Gravity Probe A, Russian Radioastron and a pair of European apparatuses Galileo. On the other hand, scientists are not yet completely sure whether it is observed in the most extreme corners of space – in the “families” of neutron stars or in the vicinity of black holes.

The first such checks were carried out, as reported by the team of Gusinskaya in January of this year, as part of observations of the unique star system J0337 + 1715 in the constellation Taurus. It consists of three “dead stars” – one pulsar and two white dwarfs, 4200 light-years distant from us.

One of the white dwarfs and the pulsar revolve around each other at such a short distance that they produce invisible yet powerful gravitational waves. The situation is further complicated by a second white dwarf moving around the first two stars at a great distance.

Such a device of this stellar system allowed scientists to check whether Einstein was right, using a pulsar as a heavy “weight”, and one of the white dwarfs – as a kind of “fluff”. The second dwarf served as a source of attraction, which simultaneously attracted both “weight” and “fluff.”

If the principle of equivalence is not observed and objects with a more powerful gravitational field “fall” faster than their neighbors, the orbit of the pulsar is curved in a certain way, stretching toward the farther white dwarf and moving along with it. As a result, it will change when and from which point its radio signal will come.

The relatively small distance between the Earth and J0337 + 1715 helped scientists to accurately measure how strongly these impulses were late and where the pulsar was at that time. As scientists joke, after six years of observation, they learned by heart all the points where similar outbreaks occurred.

As analysis of the data showed, the “migration” of the second white dwarf did not affect the pulse frequency of the pulsar and its orbit, and therefore, the speed of the drop of the “fluff” and “dumbbells”. This once again speaks of Einstein’s correctness and the lack of worthy alternatives to general relativity, scientists conclude.