What was shot on the “surface” of Jupiter? 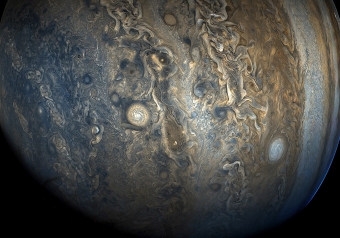 The next flight of the spacecraft Juno near the giant Jupiter, gave scientists new food for thought.

On October 24, 2017, Juno’s automatic interplanetary station its ninth planned flight near Jupiter. On this day, the spacecraft made an interesting image of the famous structures on the largest gas giant of our Solar System. It’s about the “Pearl Thread”. This is the chain of successive circular storms that look like a real pearl necklace from the distance of the spacecraft.

The above image was taken from a distance of 33,115 kilometers from the top clouds of the planet in latitude minus 52.96 degrees. The scale of this image is 22.3 kilometers per pixel. The photo was taken by the JunoCam camera.

The purpose of JUNO is to analyze the characteristics of Jupiter as the main representative of giant planets. This heavyweight solar system can provide scientists with essential data not only to gain a deeper knowledge of the origin of the solar system, but also to analyze planetary systems that are gradually emerging around other stars.