What we know about Jupiter, thanks to Juno

Almost two years in an orbit near the giant planet Jupiter, the automatic interplanetary NASA Juno station operates. Despite the technical difficulties, the station has collected a lot of interesting data, filmed an abundance of colorful photos and much closer to the goals of his research – find out what is hidden in the bowels of Cloud largest planet of the solar system.

Juno (Juno – the wife of Jupiter in Roman mythology, backonym Jupiter Near-polar Orbiter) arrived to the giant planet in June 2016. Since then, it rotates around the planet along a very elongated elliptical orbit that allows one to fly over the poles. Juno – the second artificial satellite of Jupiter, the first – Galilleo – flew in the plane of the equator and studied natural satellites.

Thanks to the new orbit, which allows close encounters and inspection from a distance, Juno receives unique information. A set of scientific instruments is designed to study the gas subsurface of the planet. It includes ultraviolet and infrared spectrometers, microwave radiation radar, cosmic particle and plasma detectors. The magnetometer is intended for studying the powerful magnetic field of the planet, and the color camera is used for surveying the upper atmosphere. Using the radio complex to communicate with the Earth, the planet’s gravitational field is studied, which affects the speed of flight of the spacecraft. 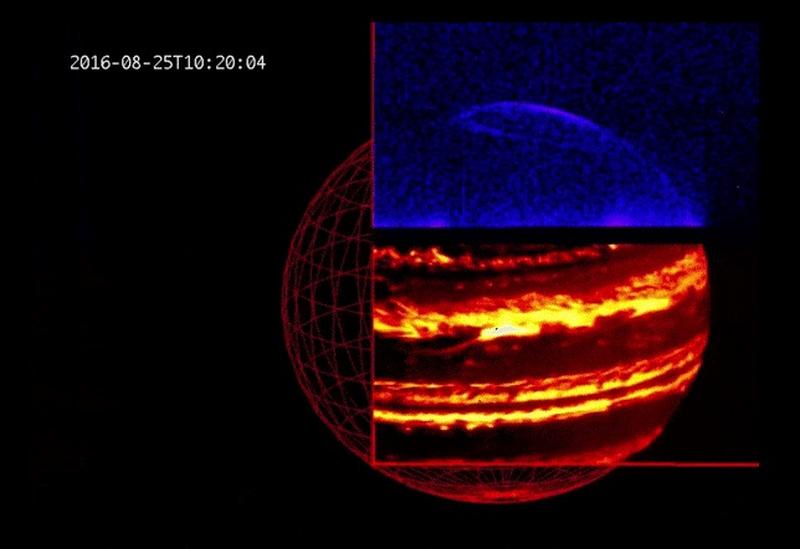 What does an infrared spectrometer see?

Unlike most distant space stations, Juno is equipped with solar panels, which are spread over a huge area of ​​64 m2. At a distance Jupiter delivery of energy from the sun is about 4% of the earth level, so Juno solar cells produce approximately as much energy as will give ordinary terrestrial solar battery to give an area of ​​3 m2. Such a decision was forced, since NASA ended plutonium-238, which was used for radioisotope thermoelectric generators. The last isotope stocks, bought in Russia in the 90s, travel by Mars in the Curiosity rover and flew to the outer limits of the Solar system in the New Horizons probe. Now NASA resumed the production of plutonium-238, but temporarily switched to solar energy. 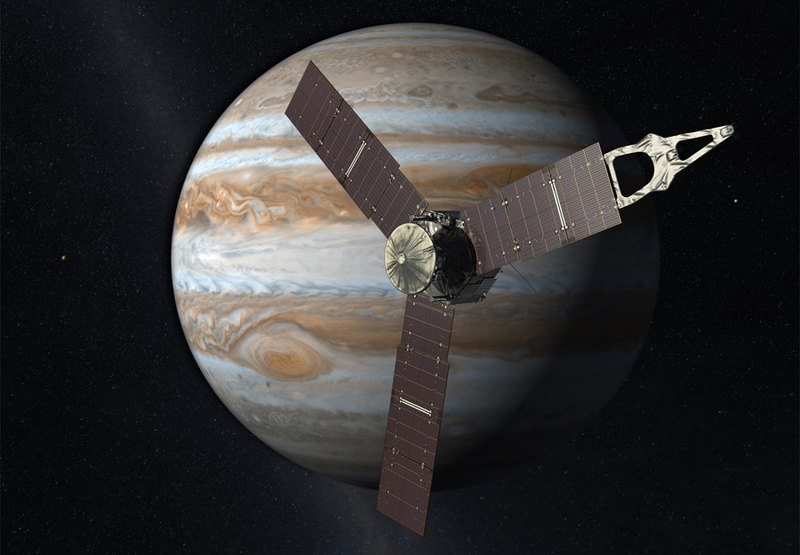 Juno is in an elongated orbit around Jupiter, the nearest point of flight above the cloud layer of the giant planet passes at an altitude of 4200 km, and the distant one at a distance of 8 million km. The complete overflight of the station commits over 53.5 Earth days. The preliminary flight plan assumed a reduction in the ellipse of the orbit, to a distance of 4,200 km to 3 million km. The plan had to be changed when Juno faced technical problems. Two valves on the helium tanks of pressurized fuel tanks seized. The engine failed to maneuver the braking and lowering of the orbit, so I had to stay on transient. Thanks to the new orbit, it is possible to extend the mission of the device, since it has less impact on the planet’s radiation belts, and on-board electronics with scientific instruments will last longer. In the summer of 2018, scientists will consider the possibility of extending the scientific activities of Juno.

Since the summer of 2016 until May 2018 of Juno made twelve revolutions in its orbit and was able to transfer new data on the distribution of the atmospheric layers of the planet, penetrate the cloud cover of Jupiter’s poles, open a new radiation belt, and learn about unexpected giant bowels because of its magnetic field. Everyone has access to the archive of pictures of the color camera Juno, and enthusiasts are independently engaged in their processing, creating real art canvases. Examples of such works can be found on the channels of the authors: Björn Jónsson, Seán Doran, Roman Tkachenko. 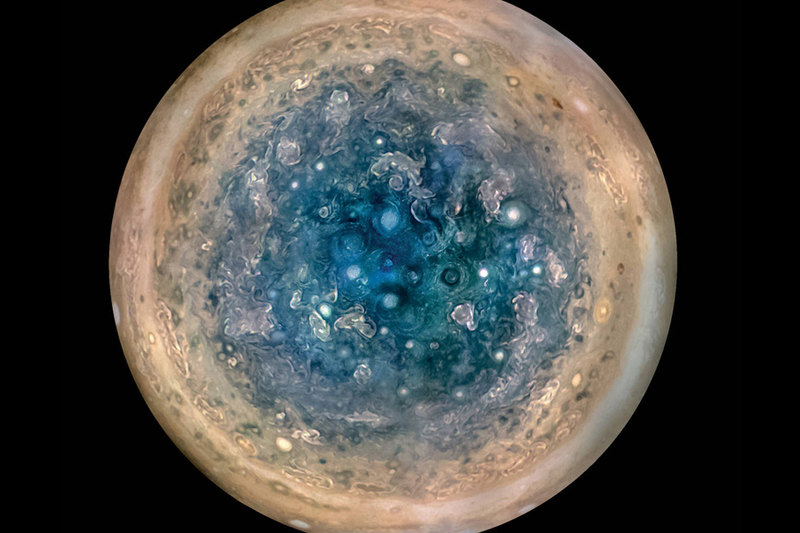 The most effective pictures of typhoons in the infrared range were obtained at the pole of Jupiter. One central polar typhoon of the planet is surrounded by eight other stable typhoons, and they are poorly visible when viewed with the “naked eye” and are at a depth. 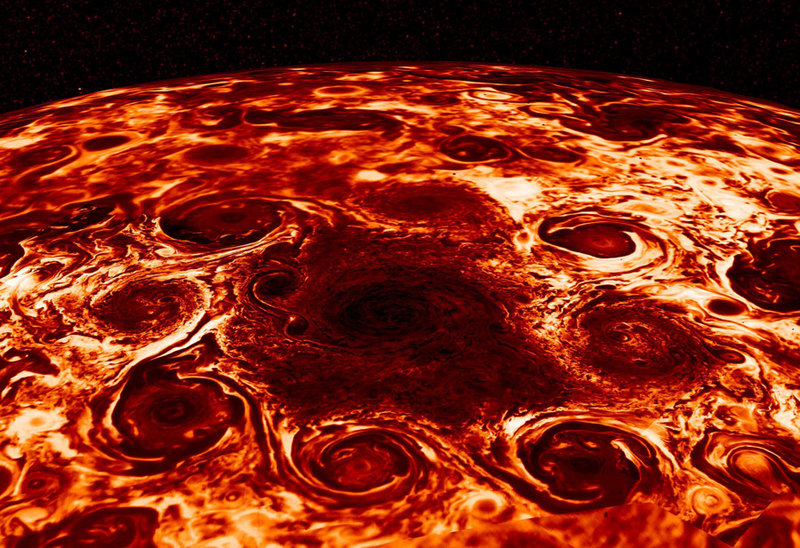 Jupiter is not the only planet in the solar system with constant atmospheric structures on the pole. Venus has a pair of typhoons, which was also examined at cloud depth in the infrared range. The pole of Saturn adorns the regular hexagon, and although the causes of its occurrence have not been precisely established, it has been experimentally confirmed the possibility of forming six typhoons around one central one.

Jupiter also brought surprises to the more studied equator. It turned out that the light equatorial band is a stream of ammonia that rises from a deeper layer. 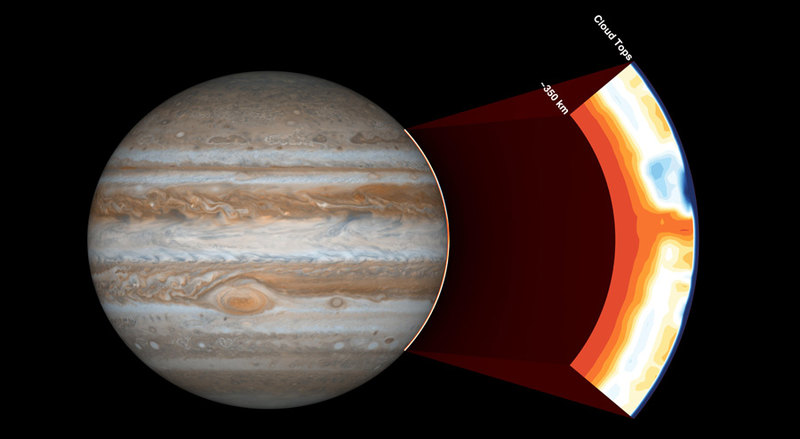 Previously it was believed that the upper atmosphere of the giant planet to a depth of 100 km is uniform, now it is clear that this is not so.

The origin of brown and orange shades in the atmosphere is still unknown, one hypothesis is that hydrocarbons, which change their color under the influence of solar ultraviolet. Another possible compound is ammonium hydrosulfide, a yellowish salt based on nitrogen, sulfur and hydrogen. White clouds are crystals of ammonia. The speed of the oncoming wind flows reaches 360 km / h. 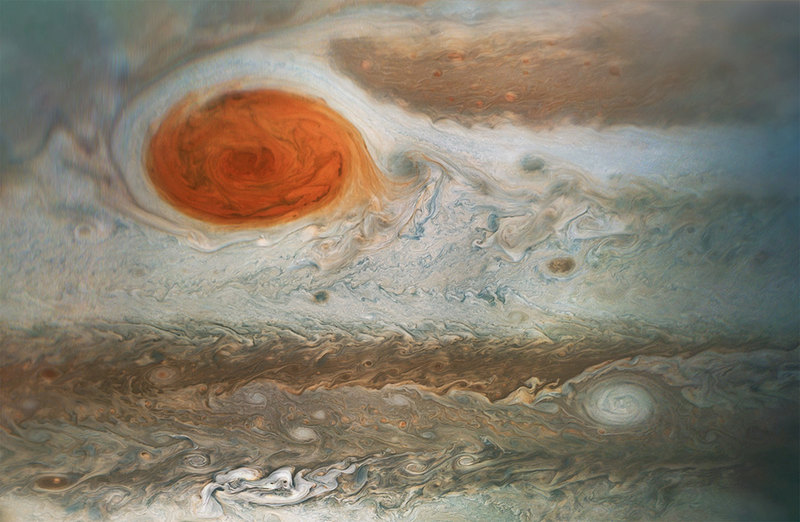 The famous Red Spot of Jupiter is a large typhoon that occurs at the junction of counter atmospheric flows in the southern hemisphere. The typhoon rises eight kilometers above the surrounding clouds, and goes into the bowels of the planet. The red spot has about 16 thousand km in diameter, that is, more than the diameter of the Earth, it has been observed for almost 200 years, and during this time has reduced its size by half, gradually decreasing today. At the edge of the Red Spot, winds blow at speeds up to 430 km / h, but inside the traffic is slower. The reasons for the appearance and long-term stability of the Great Red Spot of Jupiter are not known, perhaps it is somehow connected with the inhomogeneity of the planet’s magnetic field. 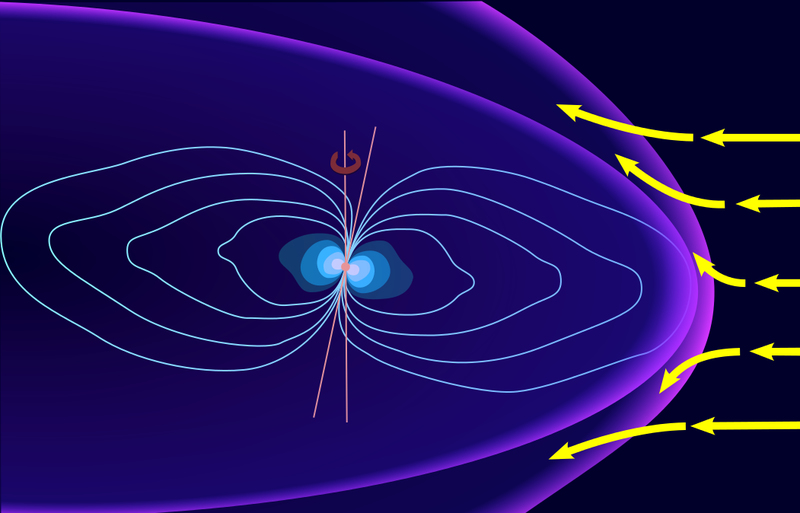 The magnetic field of the giant planet, interacting with the solar wind, as well as plasma and charged particles that are ejected from natural satellites, forms powerful radiation belts. The radiation belts of the Earth are replenished mainly from the Sun, while Jupiter’s main source of ionizing radiation is the emissions of gases from Io and other large satellites: Europe, Ganymede, Callisto. Io is closest to Jupiter and is the most volcanically active body in the solar system: there are constantly erupting dozens of volcanoes, and Juno was able to see them in the infrared range. 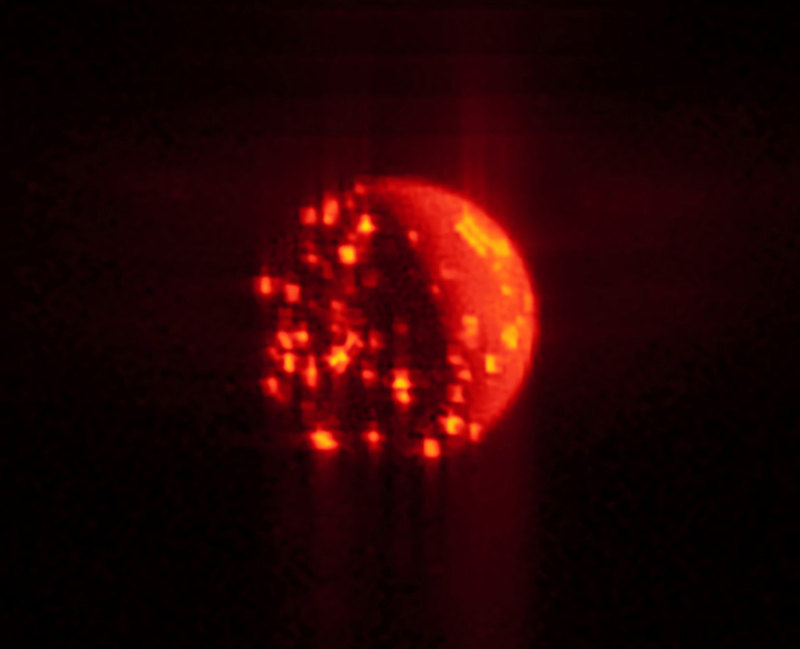 Flew at close range from the cloudy surface of the planet, Juno was able to refine the characteristics of radiation belts and even discover a new one. Three moons of Jupiter revolve inside the radiation belts, which pose a threat to the electronics and future conquerors of the cosmos. Electrons and heavy charged particles: protons, ions of different gases, possessing high energy and speed rotate around the giant planet at distances up to 1 million km. It turned out that at a close distance from the planet in the plane of the equator there is a radiation belt filled with ions of hydrogen, oxygen and sulfur, which move at speeds close to the speed of light. Closer to the poles was expected meeting with elements of the radiation belt filled with light and fast electrons. But even there, Juno registered the presence of heavy charged particles, which create a great noise in the instruments. 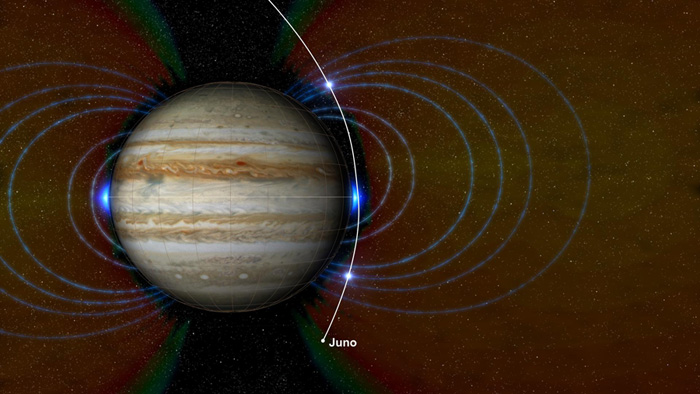 Although Jupiter is a gas giant and does not have a solid surface, it is not entirely filled with cloud typhoons. The so-called “weather layer” of Jupiter, which demonstrates the effects of atmospheric dynamics, extends deeper by about 3 thousand km. Further high pressure and temperature transforms the main component of the atmosphere of the giant planet – hydrogen – into an electrically conductive liquid. Due to the electrical conductivity, the liquid “ocean” of Jupiter falls into dependence on the powerful magnetic field of the planet, and the wind of the “weather layer” no longer has power over it. Deeper than 3 thousand km the planet behaves as a solid body, which is established by means of gravitational field analysis. It is assumed that in Saturn the cloud “weather layer” should be even thicker, and in brown dwarfs, which are also related to Jupiter – on the contrary, thinner.

The study of Jupiter continues. Until all the accumulated Juno data is processed, and it is possible to extend the mission of the device for a year or more, so there are new discoveries, solutions and new secrets from the bowels of the largest planet in the Solar System.