What will be sent to the ISS in the framework of the future mission? 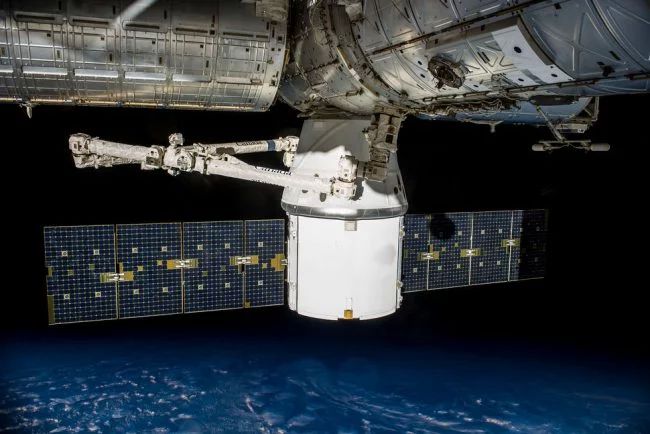 If there are no hyphenations, on June 28 the SpaceX Dragon truck of SpaceX company will leave for the ISS with new supplies for the crew members of the station, new equipment and new scientific experiments. For SpaceX, this launch will be already 12th this year and 15th in the framework of cargo missions to the International Space Station. Portal Space.com talked about the most interesting scientific experiments that will be sent to the ISS this time.

“This is only a small part of the hundreds of other experiments that are planned to be sent within the framework of the new cargo mission,” quotes Space.com words of David Brady, who is an assistant to the head of scientific missions to the ISS from the Space Center. Johnson’s NASA.

A promising cure for cancer 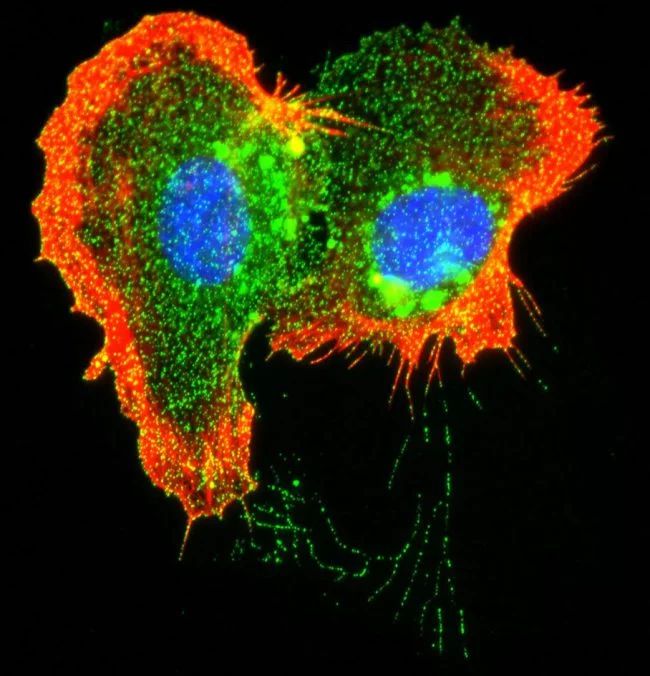 TM4SF1 protein (isolated in green) is produced in large quantities by endothelial cells, which form the basis of blood vessels. In a new experiment on board the ISS, the growth of endothelial cells will be checked and their reaction to a new anticancer drug

The experiment is called Angiex and its purpose is to test a remedy promising great prospects in cancer treatment. Scientists want to understand how the endothelial cells that make up the inner surface of the blood and lymphatic vessels behave in microgravity, and how they respond to the effect of a new drug aimed at treating malignant tumors.

In ground conditions, the agent showed its effectiveness in laboratory experiments on mice. The medicine not only fights against the tissues of the tumor, but also destroys the blood vessels that feed these tissues. Researchers explain that the effect of the agent is similar to how cells are affected in case of an infarct and stroke. If the blood vessels that feed the tumor die, the tumor itself will die.

Despite the proven effectiveness of the drug, scientists are not yet confident in the safety of the drug itself. Since it affects both the cancer cells themselves and the blood vessels supporting them, the creators of the drug want to make sure that their drug does not do any harm to healthy blood vessels.

“We want to cure people of cancer and do not want them to die from the cardiovascular disease caused by our medicine,” says Paul Jamie, one of the drug’s developers.

One of the difficulties in verifying the effectiveness of the drug is that the researchers do not have suitable artificially created cellular-cultural models for blood vessels. Therefore, to understand how these vessels function, scientists have to conduct tests on living beings.

“We can not look into these cells and consider all that we need. In this case, we can help the environment on board the ISS. When these cells grow in microgravity, they will behave in much the same way as they do inside the real blood vessels on the ground, “says NASA’s statement published on the page of this project.

Previous studies have shown that endothelial cells do not grow very well in space. However, scientists want to follow the growth of cells in microgravity and their response to the effect of the treatment developed by them.

“These cells will be treated. Then we’ll see if the result of treatment in microgravity differs from the result of ground tests. ” 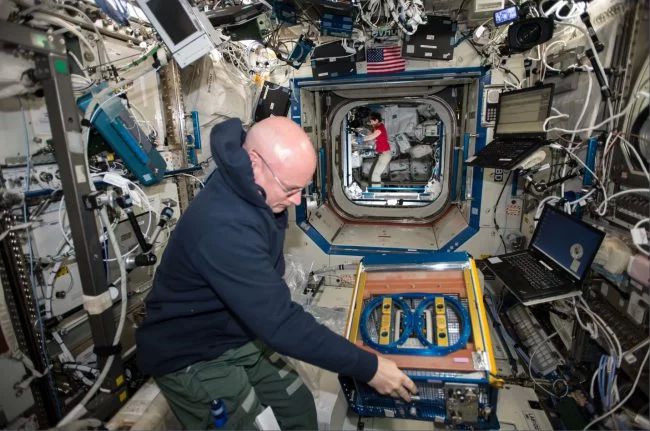 NASA astronaut Scott Kelly worked with a mouse farm on board the ISS in 2015. In the framework of the new “mouse experiment”, rodents will be monitored for microbiomas

Within the CRS-15 cargo mission, a group of 20 laboratory mice will leave for the ISS. With the help of these specialists from Northwestern University (US) want to find out how the space conditions affect the microbiota of the gastrointestinal tract of rodents.

The bacteria of each person and animal in the intestine can affect the general state of health. As space missions become more and more long, and mankind is already thinking about how to start populating outer space, it would be reasonable to understand how space flights affect human microbioms.

“It’s hard to imagine a man who will be happy to dig in the samples of feces,” jokes Martha VitaTerna, a microbiologist at the Northwestern University.

“But believe me, we are one of those same people.”

The expert explained that the study of bacteria in the samples of rodent feces will make it possible to work better in what bacteria are useful for the intestine and the body as a whole. In addition, scientists want to better understand the work of other physiological systems in microgravity, which, as is known, are able to respond to certain conditions of the intestinal microbiome. It is, for example, the immune system, metabolism, cardiovascular system, as well as processes that affect our sleep hygiene.

The future of space food 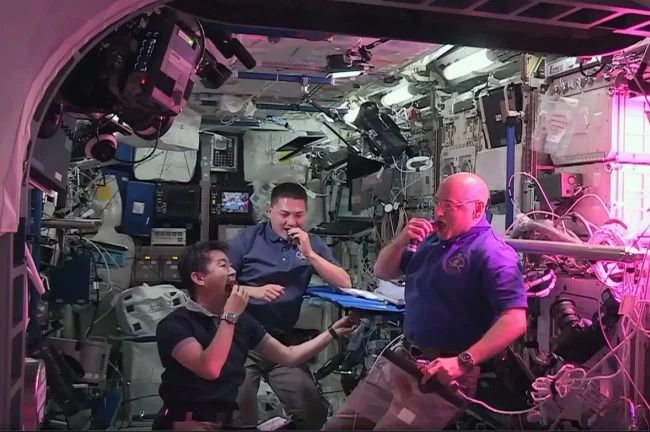 As mentioned above, space missions are becoming more and more continuous, and in the future we plan to go to other planets and in the future there will be settled. Before proceeding to such long flights to us, in addition to obvious problems like cosmic radiation, it is necessary to deal with nutrition issues. Of course, it is possible to take food with you, but ideally – it is better to be able to grow it on the spot.

Experiments to grow fresh vegetables on board the ISS have been carried out repeatedly, and at the moment there is a portable greenhouse on the orbital station that allows growing a fresh salad. However, in the future cargo mission, algae will also be brought to the station.

Why seaweed? Scientists say that algae can become a potential source of food. In addition, they can be considered as raw materials on the bio-base, that is, they can be used in the production of various materials, such as plastic and paper.

Algae can show growth even at a very low level of illumination, necessary for photosynthesis. In other words, they are great for growing in orbit. They also have one drawback: most algae species grow best in water. However, the fluids in space behave quite differently than they behave on Earth.

Scientists explain that the ISS crew will try to grow several species of algae inside the “breathing” plastic bags, installing them in the Veggie portable greenhouse located at the station. After that, live samples of algae are planned to be brought back to Earth, where they will be investigated by biologists, who will try to determine which genes will best promote the growth of this culture in microgravity. Understanding which genes are responsible for the faster growth of algae, scientists hope to create a special kind that can be mass produced in space.

Also, the Shewanella bacteria will be sent to the ISS. Most often this type of bacteria is found on the sea floor, but can also be found in the soil. Most of all, these bacteria are represented in the fact that they can grow on metal surfaces and process organic waste (for example, urine) into electricity.

At present, work is under way on the use of Shewanella in the biosecurity of metal surfaces against corrosion. Also, studies are being conducted on the use of these bacteria in the field of technologies for the production of microbial filtration fuel cells.

The experiment on the ISS will be aimed at understanding how these bacteria and biofilm (the material on the basis of which bacteria will be grown) will behave under microgravity conditions. Due to the access to the three-dimensional biofilm image that will be on the ISS, researchers will be able to monitor continuously and note any changes.

Why are scientists so interested in these microorganisms? Filters based on microbial fuel cells can one day become an excellent means for treating wastewater. Thanks to the ability to produce electricity, they will be able to compensate for its costs when cleaning up water, generating energy in the process. Since the duration of space missions is growing, we need to increase the degree of self-reliance within them. According to researchers, microbiological processes can help us in this task.