What’s hiding on the dark side of the moon 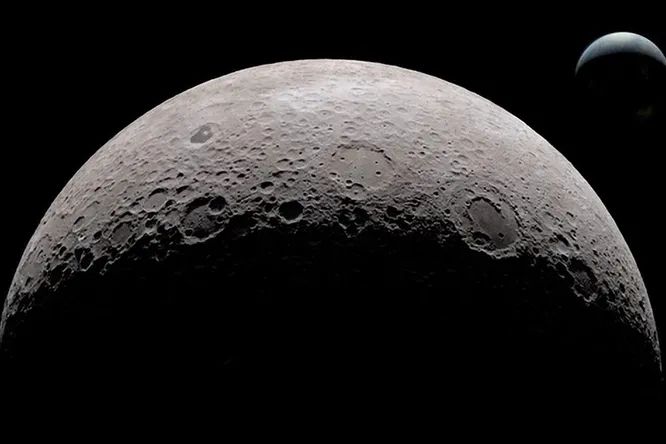 The side of the moon hidden from human eyes has been shrouded in secrets for many centuries, and only recently astronomers managed to study this mysterious region

But why is this happening? If the observer is on the planet, then it will seem to him that its natural satellite never turns. But in fact, it rotates all the time – it just rotates around its axis and rotates around our planet at the same speed: about once every 27 days. When a cosmic body achieves this synchronization, astronomers say it is “tidally locked.”

Scientists believe that, like many natural satellites, the moon began life spinning at a completely different speed. However, over time, our planet’s gravity created torque, synchronizing the satellite’s rotation with its orbital period. This phenomenon is actually quite common: many of the moons of Saturn and Jupiter are tidally associated with their parent planet.

It was because of the tidal blockage that scientists did not know what the far side of the moon looked like until 1959, when the Soviet space probe Luna 3 took the first photographs of the crater-covered landscape. Since then, we have received some more good observations: in 1968, astronauts aboard NASA’s Apollo 8 mission became the first people to see the far side of the moon with their own eyes. NASA’s Lunar Reconnaissance Orbiter has been mapping the entire surface of the Moon in high resolution since 2009. And in 2019, China became the first country to soft-land a spacecraft and deploy a rover on the dark side of the moon forever hidden from our eyes. The Chinese landing module Chang’e 4 and the Jade Rabbit 2 rover have allowed mankind to study in more detail the unusual lunar landscape.

But the truth is, you don’t need a spaceship to see the far side of the moon. Although at any given time you can see a maximum of 50% of the lunar disk, additional areas of its surface are constantly open to attentive observers. In fact, during the lunar cycle, up to 59% of the Moon’s surface becomes visible to observers on Earth if they know what to look for and do it systematically.