What’s wrong with this hole on Mars 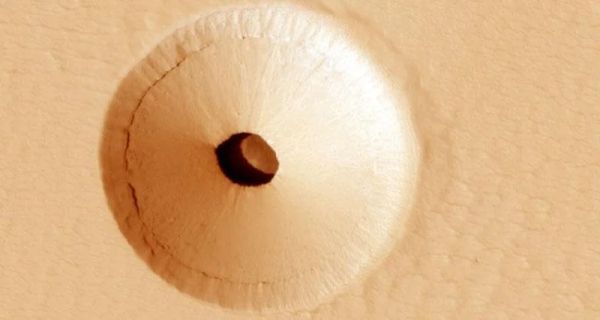 Mars is a wild but beautiful place full of mysteries. A perfect example of this statement is a photograph of a hollow mountain that appears to have been hollowed out.

This is not the result of some strange mining experiment, and the mountain is indeed hollow. But what you see is a lava skylight, a product of ancient volcanic activity beneath the surface of Mars.

The area where the hollow mountain is located is located on the western slope of a volcano called Pavonis Mons. There are many interesting geological formations in this area: long, meandering lava tubes, faults, and, of course, the largest volcanic crater.

This is a kind of skylight through which you can see the lava tube. The mountain is hollow because sometimes lava flows, hardening from the outside, continue to flow inside. Then the lava leaves, leaving the caves. Over time, the top of the tubes can collapse.

The hole in the picture has a diameter of about 35 meters. The fragments of the “roof” that collapsed inside can be seen through the hole formed. They lie at a depth of about 28 meters. The pile of rubble at the bottom must be at least 62 meters high. That is, the pit itself had to have a depth of at least 90 meters before the collapse. This Martian lava tube is larger than any known on Earth.

These formations can be excellent places for underground bases. In addition, lava tubes protect from winds and cosmic radiation, which means that, in theory, life can exist in them.