When the supernova will destroy life on Earth 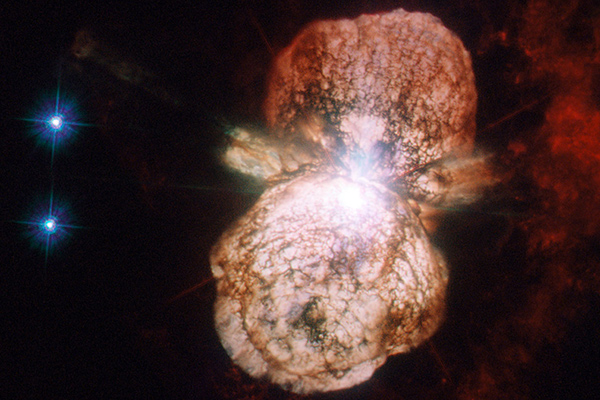 Dr. Gunter Korschinek, a specialist in experimental particle astrophysics from the technical University of Munich (Germany), described the possible effects of a supernova to life on Earth. The probability of the deadly effects of cosmic rays from supernova a scientist is assessed as extremely low, but nevertheless does not exclude that in the past, such events could cause mass extinctions on the planet. Survey Korschinek will become a Chapter of the forthcoming “Handbook of supernova.

Depending on the distance between the star and the Sun scientist considers different types of threats to the planet. Among them is the depletion of the ozone layer on Earth, resulting in intensified exposure to ultraviolet radiation of the Sun on terrestrial organisms, and narrow lethal effect of x-rays from supernova. Count and indirect effects of flare stars. For example, high-energy cosmic rays can change the climate of the planet, in particular, to initiate the formation of dense clouds that prevent sunlight from reaching the planet’s surface and cause a new ice age.

Cosmic rays high energy opened in 1912, Austrian physicist Victor Hess. After several studies conducted in a balloon, he found that the background radiation increases with altitude. After 22 years, Walter Baade and Fritz Zwicke showed that fluctuations in the intensity of cosmic rays can be associated with a supernova — one of the most energetic events in the Universe. Shooting stars happen after they end the supply of nuclear fuel (sne II), or in binary systems (type Ia supernovae), where the flow of matter from stars belonging to the main sequence, white dwarf increases its mass up to the Chandrasekhar limit of about 1.44 solar masses). After the outbreak forms a neutron star.

The resulting explosion cosmic rays are streams of particles comprised primarily of protons and, to a lesser extent of heavier atomic nuclei and electrons. In addition to massive particles, supernova explosions give rise to streams of photons — intense x-ray and gamma radiation.

Twenty years later, after clarifying the nature of cosmic rays, in 1954, the German paleontologist Otto Schindewolf put forward one of the first hypotheses about the relationship of supernova explosions with mass extinctions — the disappearance of numerous species on Earth, recorded paleontological, paleoclimatic and geological studies. He suggested that high energy radiation could lead to the extinction of marine organisms either directly or indirectly, through the formation of life-threatening radioactive isotopes. Since then, many scientists have tried to compare supernova with mass extinctions.

The graphic above noted five major mass extinctions. The information is only for sea animals because it has been preserved in the fossil record. Two mass extinctions, dresbach and boomskoe that occurred in the Cambrian, probably could be considered one of the largest, but paleontological data is based on a very small number of fossils of that time. 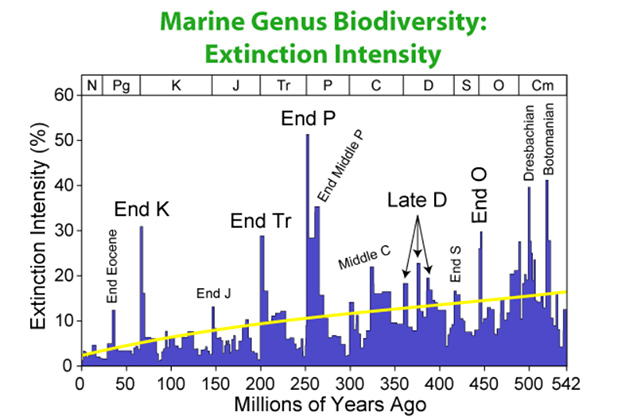 Periods of mass extinctions on Earth, and decreased species diversity

The mass extinction of the dinosaurs explain usually either by a huge meteorite, or lack of micronutrients in the Phanerozoic. Supernova explosions provide additional explanations. Korschinek considering two possible scenarios for the impact on the Ground Bang near planet supernova.

In the first scenario, the planet is exposed to cosmic rays that have passed through the interstellar medium. Depending on its density, the effect would be significant, if the stars are removed from the Sun at no more than 15-20 parsecs. The second scenario — a narrow beam from a supernova. Such a beam will have to overcome the pressure of the solar wind to penetrate deep into the Solar system.

In the first scenario, the most likely way to increase the intensity of radiation from a supernova — the Fermi mechanism, when the particles take energy have found their way space plasma. The denser the interstellar medium, the more energy can purchase the passing through it of particles. Just in the surrounding space during the explosion, the star emits the energy of about ten 50-degree teraelectronvolt. The standard interstellar density (half atom per cubic centimeter) cosmic rays, as shown in the image, can pass through the interstellar medium without any loss of intensity. 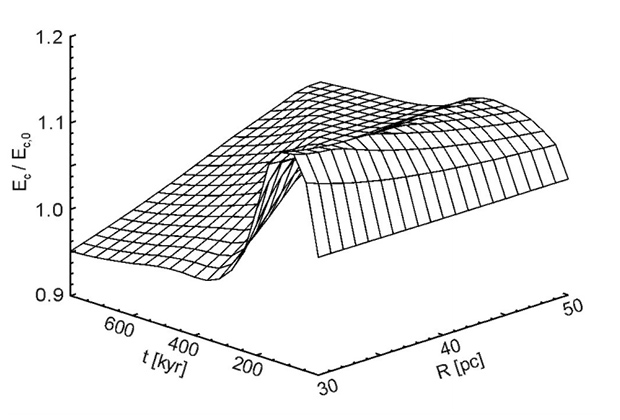 In the second case, the situation changes dramatically. Calculations show that for a supernova located at a distance of ten parsecs from the Earth, the intensity of the flux of cosmic rays must be a hundred times more.

The first studies on the impact on the lives of supernova explosions were conducted in the 1960-ies. Scientists have shown that if the exploding star is located at a distance of about 20 parsecs from the Sun, it is likely that implementing the second scenario. Normal absorbed dose of radiation from cosmic rays and warming of 0.0003 per year. It will increase a hundred times can negatively affect the animals. For small mammals a dose of approximately 0.02 warming per year is not dangerous, for large — disastrous.

The negative effect may be different. For example, the accumulation of radioactive isotopes in large animals and reduced reproductive capacity, up to sterilization, fine. To killed insects and single-celled organisms, the intensity of cosmic rays should be a hundred times more. Such radiation indirectly affects plants through a decline in the population involved in food chains animals.

Very realistic looks at the prospect of the destruction of the ozone layer of the Earth. Due to increased intensity of cosmic rays, in the second scenario, will increase the content of nitrogen oxides in the stratosphere of the planet. This compound reacts with the ozone to produce oxygen (a molecule of two atoms) and nitrogen dioxide. For a supernova at a distance of 10 parsecs the ozone layer would be depleted by 95% over 300 years. For the Earth it could have catastrophic consequences — disrupted the food chain, which involves photosynthetic organisms, and ultraviolet radiation would cause mass extinction and the accumulation of carbon dioxide in the atmosphere — the greenhouse effect.

Later such a negative Outlook was commuted. It turned out that as a result of a supernova the most, by 60 percent, the ozone layer will be reduced at high latitudes. At the equator is 20 percent. In this case, according to experts, the mass extinction will not. In another model, proposed by NASA, a mass extinction is projected to result in a supernova located closer than eight parsecs from the planet. Scientists say the inability to fully predict the consequences of supernova explosions due to the complexity of the biosphere of the planet.

Interesting hypothesis about the atmospheric effects related to the solar modulation of cosmic rays. It first showed up in the late 1950-ies. Later, in the 1990s, when it became clear the role of ionization of the atmosphere in the formation of clouds put forward the hypothesis about the influence of cosmic rays on climate. The idea was developed in the 2000s, when an attempt was made to find the relationship between glacial periods and the passage of the Sun through the galactic arms and disc of the milky Way. At this time next to the planet is more and more supernovae, and, logically, the Earth must be exposed to a significant radiation load. Scientists estimate that the critical distance of eight parsecs of a supernova comes to the planet every 1.5 billion years.

Separate dangerous are gamma-ray bursts, lasting from a few milliseconds to several hours. Such events result in supernova explosions such as type Ia, and the merger of neutron stars. The first gamma-ray burst was observed by the American Vela spacecraft designed to monitor nuclear tests on the Ground. It is believed that the outbreak occurs in two narrow cones oriented opposite each other. 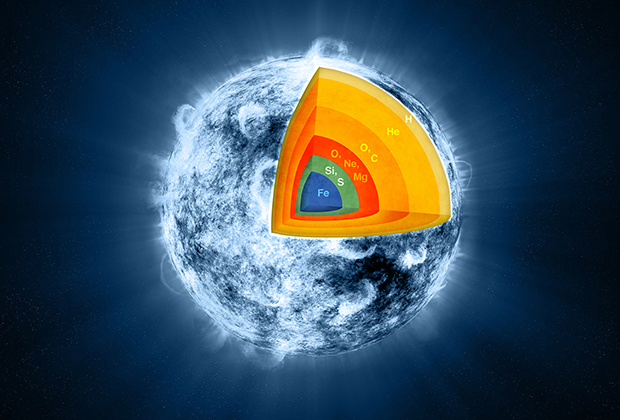 The expected structure of the Cassiopeia A supernova before it exploded

In 2000 years, scientists have calculated the consequences of a strong gamma-ray burst to Earth. The flow of energy of the order of ten, hundred and thousands of kilojoules per square meter during the month would reduce the area of the ozone layer, 68, 91 and 98 percent, respectively. It is also associated with the formation in the atmosphere, nitric oxide reacts with ozone. Not spared the attention of scientists and closest to land candidates in a supernova, which can explode soon, by cosmic standards, time.

Binary star IK Pegasi, is located at a distance of 40 parsecs from the Sun. As close to the Sun in about 1.1 million years. After another 0.8 million years one of her stars, the white dwarf IK Pegasi B completes its existence as a supernova of type Ia. Most likely, the explosion will be a danger to the planet. Another object red supergiant Betelgeuse, is removed from the Sun at a speed of 33 kilometers per second. Now a bright star in the constellation of Orion is located at a distance of 200 parsecs from the Earth. Scientists do not exclude that it will explode as supernovae type II, but because of the distance from the Sun, this event will also present a special danger to life on Earth.