When will we see pictures of the Great Red Spot of Jupiter? 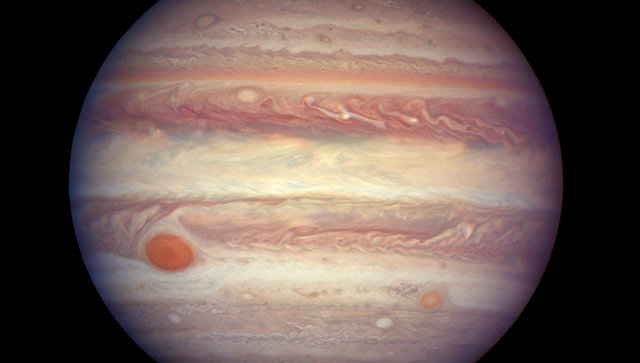 Pictures of the Great red spot of Jupiter, which the US Juno probe will do today during the rapprochement with the gas giant, will be received on July 14, NASA reported.

“Tonight, at 18:55 Pacific Time (4:55 Moscow time on July 11), I will fly over the Great red spot of Jupiter.” Pictures are expected on July 14, “the probe operators said in his official Twitter account.

As previously reported, the sixth convergence of the device, which arrived in the orbit of the gas giant on July 4, 2016, will take place on July 10 by the time of the Eastern coast of the USA (July 11, Moscow time). The probe will reach a distance of 3.5 thousand kilometers from the clouds of the planet at 04:55 Moscow time (July 11), in 11 minutes and 33 seconds, for which it will cover a distance of 39.7 thousand kilometers, the device will reach the Great red spot and fly over Its clouds for 9 thousand kilometers. All eight scientific instruments of the spaceship must conduct observations while converging with Jupiter.

The probe Juno started to Jupiter in August 2011 and last year approached the giant planet and entered a stable orbit around it. Juno commits a turn around Jupiter for 53.4 days. From the moment of entering the orbit of the planet, the device made five approaches to it, one of the encounters passed in the “sleeping mode” without including scientific instruments of the probe.

It is assumed that the probe will be in near-uber-orbit at least until February 2018, after which it will sink to Jupiter, but it is possible that its mission will be prolonged.

As NASA specifies, people have been observing the Great Red Spot of Jupiter since 1830. This is the largest atmospheric vortex in the solar system, which probably exists for more than 350 years. Its size is about 40 thousand kilometers in length and about 13 thousand kilometers in width, the speed of the wind inside the spot exceeds 500 kilometers per hour.