Where in space is such a huge number of lithium?

In our day, lithium is everywhere. Back in the mid-19th century, this soft, silver-white metal was the cure. Doctors treated his psychiatric disorder like mania. Even today, this metal is used as medication for bipolar disorder. But for many people, lithium also has become a synonym of batteries and accumulators. This is an important ingredient, thanks to which your phones, laptops and other portable devices. With the development of hybrid and electric vehicles, the market of this metal is only growing, by 2025 it will triple in volume, consider in Goldman Sachs.

Most of the world’s reserves of lithium is in South America and mostly in the sediments beneath the dry lakes in the high Andean regions. But Li has been here much longer than any mountain or even the Earth itself. Furthermore, lithium is one of the first elements, along with hydrogen and helium — which appeared in the Big Bang 13.8 billion years ago.

The history of lithium is long and shrouded in mystery. In the period after the Big Bang, the majority of the educated lithium missing. Moreover, when modern astronomers look at the Universe, they find more lithium: approximately four times more than it should to appear in the Big Bang.

More than ten years, scientists have tried to figure out where this extra lithium. And thanks to the latest discoveries search for the mysterious cosmic factories for the production of lithium may finally be completed. 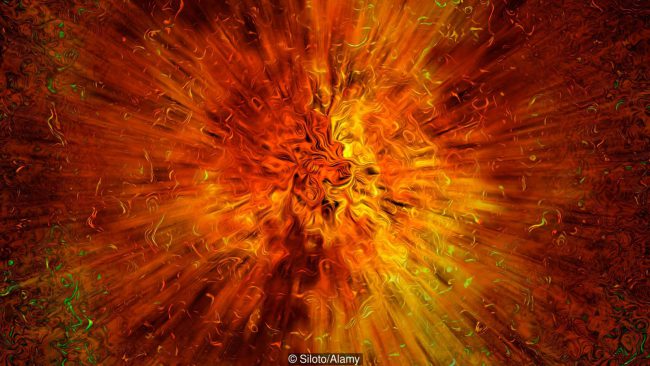 In space more lithium than was created during the Big Bang

The oxygen we breathe and the iron in your blood — most of the elements in your body were forged in the nuclear furnaces of stars. As said astronomer Carl Sagan, “we are made of star stuff.”

All elements heavier — like Titan, which is often used in bicycles, require something more violent. Most of them were produced in the nuclear reactions during the explosive deaths of massive stars. Some metals — such as gold, may have been born in strong collisions of neutron stars, super dense cores of dead stars.

But the basic elements were made in the first three minutes after the Big Bang. Early universe was a hot soup of plasma, and as the cooling and expansion koagulirovat she was mostly in the form of atoms of hydrogen and helium, the two simplest and most abundant elements, the core of which consists of one and two protons respectively.

That’s all. After three minutes the universe is too cold to form other elements.

Even though this happened 13.8 billion years ago, scientists know and understand the nuclear reaction that produced these first elements. Satellites like WMAP and Planck have carried out precise measurements of the early Universe and allowed scientists to accurately calculate how much should be made of each element and isotope. 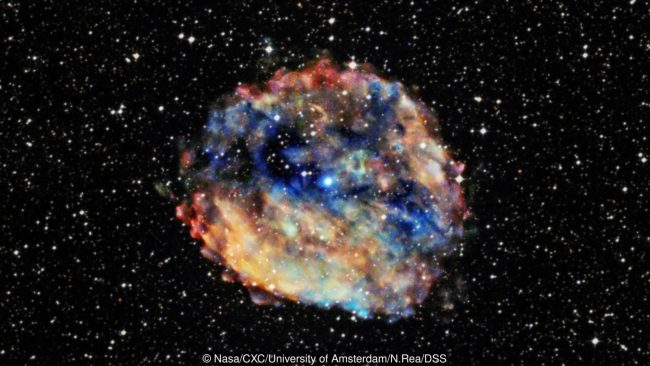 But when researchers compared their calculations with what you see, not all the same. “Deuterium is in order. Helium too,” says Brian fields, an astrophysicist at the University of Illinois in the United States. “Only the Li knocked out”.

And stands out very much. Lithium three times more than it should be, and this discrepancy is called “primary lithium problem”. For the first time the missing lithium cosmologists noticed 20 years ago and since then trying to find a suitable explanation.

Perhaps, the scientists suggest, some unknown processes in stars destroyed the ancient Li. Or the explanation may include a completely new physics. For example, interaction with dark matter, an unknown substance that makes up a quarter of the space, somehow could destroy the lithium in the early Universe.

And although in the early ages, it seems that lithium was lacking, in modern space, it’s even too much. Astronomers have discovered a relatively abundant amount of lithium on the surface of young stars that have formed relatively recently and also meteors in the Solar system. There are about four times more lithium than was produced in the Big Bang — in the galaxy it would gather up to 150 solar masses.

Must be something that produced this excess lithium and scattered it into space, where he gradually became involved in the nascent Solar system and billions of years later, in the battery of your mobile phone. The only question is that? 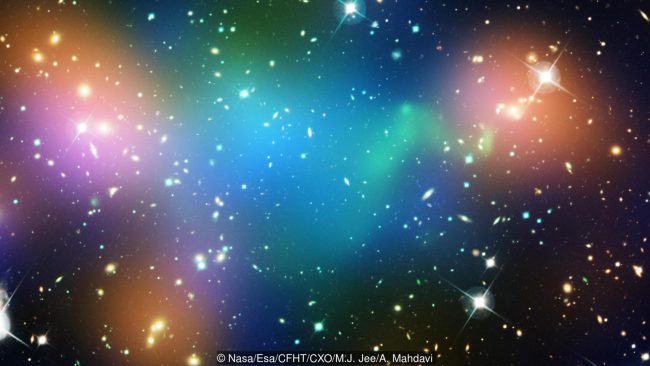 One of the options — cosmic rays: high-energy particles, mostly protons, which penetrate the space. In the process cosmic rays can encounter the wandering atoms, such as oxygen. This collision destroys the oxygen atom to pieces, turning it into a stream of small elements, including lithium.

Although this process is more likely to occur across the galaxy, says fields, calculations show that these collisions can not explain more than 20% of the observed lithium. Another 20% can be associated with the Big Bang. 60% remains unexplained.

Of these 60% can come from a certain type of stars called asymptotic branch giants (AUG). It stars and weight — not more than 10 solar — which has almost run its course. Nuclear reactions inside these stars produce lithium, which may then rise to the surface. It is unclear just how much lithium is ejected and is distributed throughout the galaxy.

And there are stellar explosions, called new. Unlike supernovae, they are larger and more powerful counterparts, the new are not a direct result of the deaths of stars. These more moderate explosions occur on the surface of a white dwarf, a corpse of a star like the Sun. 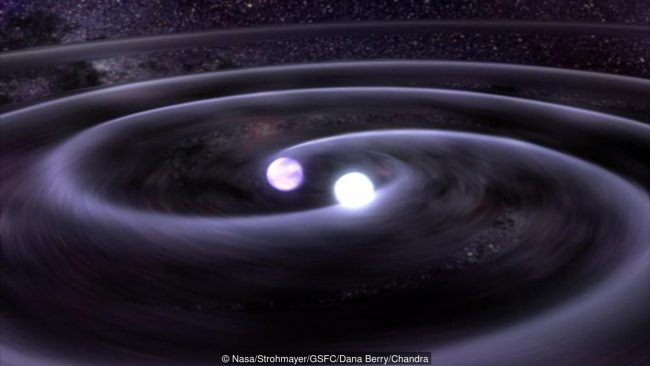 If the white dwarf is orbiting another star, the gravity of a white dwarf can pick up the hydrogen and other materials with your partner. The layers of material accumulate on the surface of a white dwarf. This leads to an increase of temperature and pressure that ultimately causes nuclear fusion and nuclear reactions that produce lithium.

Fusion further increases the temperature, which leads to a greater number of thermonuclear reactions. Very soon, the layers of material burst, which is on Earth see a bright star: supernova.

In the blast material — including Li — are ejected into space at speeds of several thousand kilometers per second. Therefore, the new material is better distributed than the stars AUG, Luke says, Izzo, astronomer of the Institute of astrophysics of Andalusia in Spain.

For many years astronomers tried to determine which of these three processes — cosmic rays, stars AUG or new stars — can produce most of the lithium. “We know that all these processes certainly produce lithium,” says fields. “The question is whether or not they manufactured it equally or something? Discussion on this topic has been ongoing for a very long time.”

Speaking of new, scientists first thought of them as potential lithium factories about 40 years ago. In the mid 1990-ies were carried out accurate calculations that supported this hypothesis, but still it remains purely theoretical, not confirmed by observations. For many years nobody could see the production of lithium using a new star. But in early 2015 this has changed.

Armed with new advanced tools and methods, two groups of astronomers in Japan and Europe finally discovered lithium in in new. This discovery not only confirmed that the new do produce lithium, but they are doing this very smartly — maybe enough to explain with their help, a large part of the galactic lithium.

“When I saw them, were absolutely amazing,” says Sumner starfield, an astrophysicist at the University of Arizona, one of the first who began to study the production potential of lithium in new in the late 1970-ies.

And now in 2015 the group under the guidance of Akito Tajitsu from the National astronomical Observatory of Japan found beryllium in the new star. It was a sure sign that the new produce lithium, beryllium decays because it is on Li. 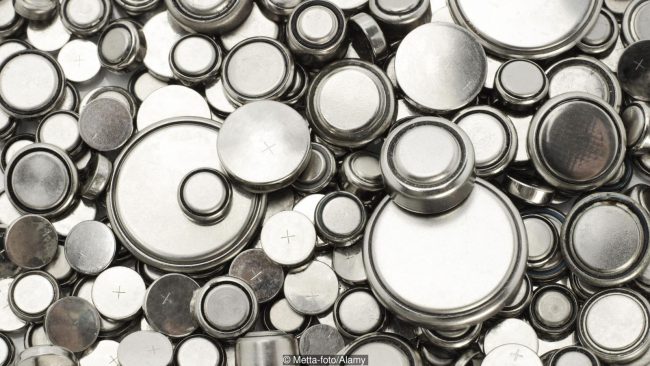 After a few months, Izzo and his team published a study that directly detected lithium in other new. In early 2016 group Tajitsu discovered beryllium in two stars (one of them was called V5668). In the same year, Izzo together with scientists under the leadership of Paolo Molaro of the Trieste Astronomical Observatory in Italy confirmed the detection of beryllium in V5668.

That’s a total of four new stars showing signs of lithium production, one of which was confirmed by two independent teams. “Experts in spectroscopy have also got similar results,” says Jordi Jose, astrophysicist at the Technical University of Catalonia in Spain. “This is about something Yes speaks.”

“They managed to capture a new one in the process immediately after the explosion and they were able to measure the material that was cut off directly,” says fields. “Tons of lithium”.

In fact, says Izzo, a new star, having watched his team produce so many lithium that two similar start to the year could create a whole observed in the galaxy lithium. This is a preliminary rating, and astronomers must learn about the other new stars to check and confirm measurements.

Nevertheless, all the data are good. “Using these measurements, we begin to probe the truth,” says fields. Scientists like Starfeld and Jose, theorists who for decades have starved without the data now plan to repeat their calculations and models and compare them with new observations. “Now the game has begun,” says Jose. 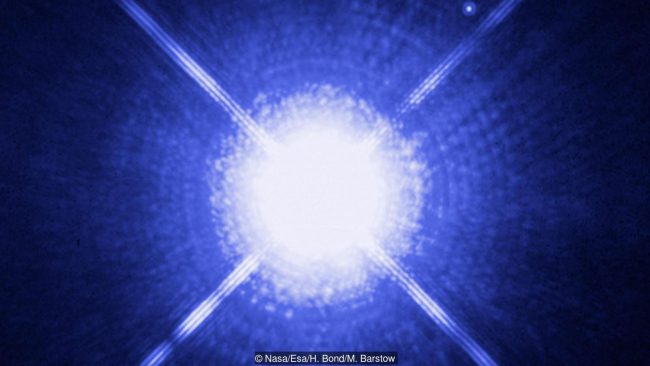 Next, the researchers will be able to confirm current model new and accurately how much lithium they spew. Based on previous models, scholars like Jose has estimated that the new can cover up to half of the lithium is not produced by the Big Bang. But with new observations, he says, new can produce up to 80% recycled lithium.

To be clear, these works do not solve the problem of primary lithium — riddle of why the early Universe had so little of this metal. But new discoveries are coming.

“Because now we have a better understanding of secondary processes for the production of lithium — like living and dead stars are doing it — it helps us to unravel the history of lithium in our galaxy, how it was born and at what point to the picture were added latest sources of lithium,” says fields.

Scientists hope to uncover the full story of this modest metal can’t do without our technology. Just think: that’s a long way, along with hydrogen and oxygen was the lightest and this important metal.