Where the last supplies of water on Mars are gone 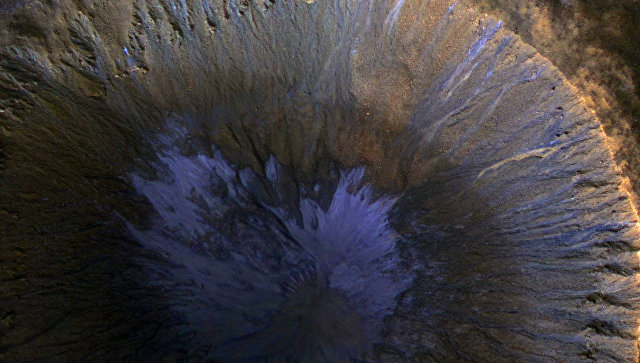 The last remnants of the Martian rivers and oceans could not evaporate into space, but literally absorb into its rocks and change their chemical composition, coloring the planet in red, says an article published in the journal Nature.

“The cycle of rocks in the depths of the Earth prevents sharp changes in the concentration of water on the surface of the planet, since” excess “moisture is removed from the rocks before they reach the mantle, on Mars it does not exist and its waters constantly interacted with” dry “basaltic lavas, forming a mineral rich in water, as a result, the appearance of Mars changed and the planet became dry and lifeless, “said Jon Wade of Oxford University, UK.

Recent observations of Mars with ground-based telescopes have shown that in the past 3.7 billion years, Mars lost an entire ocean of water, which would be enough to cover the entire surface of the red planet with a 140-meter-thick ocean. Where this water disappeared, scientists are trying to figure out today, studying the ancient Martian meteorites.

Wade and his colleagues drew attention to one interesting feature of the oldest Martian meteorites – their rocks are completely unlike the color, the structure and composition of those minerals that today are found on the surface of Mars rovers Curiosity and Opportunity. In particular, they contain a large number of so-called basic rocks, and very few compounds with a large number of oxygen atoms and other oxidants.

This prompted them to think that the chemical composition of the rocks on Mars could change markedly in the last 4 billion years under the influence of cosmic rays, solar wind and liquid water, large reserves of which were to be present on the planet at the time of “catapulting” these meteorites.

Guided by this idea, scientists analyzed how water could interact with rocks, analogues of which are contained in meteorites, and counted the volume of water that they could absorb and retain inside of themselves as they plunged into the depths of Mars. This allowed them to understand where his water disappeared and find the main “culprit” of this loss – iron oxide.

As scientists discovered, the Martian basalts and other basic rocks will absorb water and interact with it much more actively than their “cousins” from the Earth, since they contain almost twice as much iron oxide than similar minerals on our planet. Due to this, the depths of Mars are transformed into a kind of sponge, which constantly absorbs water and almost does not return it due to the fact that there is no tectonics on the red planet.

As a result, most of the waters of Mars, according to Wade, did not evaporate into space, as most planetary scientists believe today, but “dissipated” into its depths, where it is hiding until now. The next NASA rover, as the authors hope, will help to check whether this is true or not.