Where the Solar system ends? 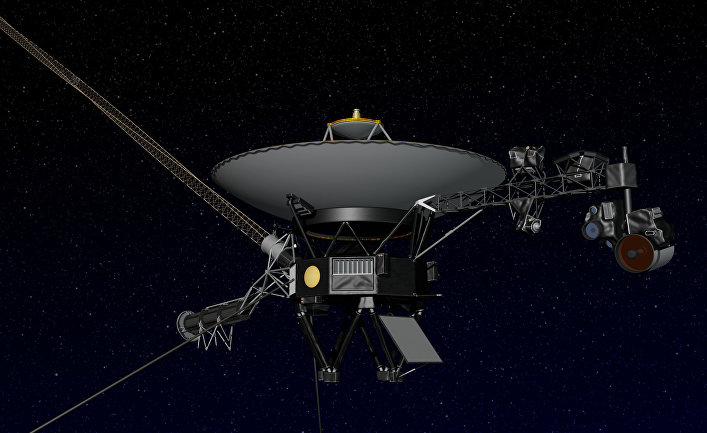 Voyager 1″ is the only man-made object, famous for the fact that escaped outside the “space house”, their creators, the Solar system. And at least twice. Where is he now? Technically still in it.

The first sensational reports that automatic probe “Voyager 1” (Voyager 1), launched by NASA in 1977 to study Jupiter and Saturn, left the Solar system, appeared in March 2013.

American geophysical Union (AGU) is a nonprofit society dedicated to research of Earth and space, issued a press release which referred to the sudden changes in cosmic radiation.

In just a few hours after the comment directly working on the project, NASA scientists about what they do like I can not argue, experts AGU went back on their word. They changed the press release, now stating that the device “has entered a new region of space”, and confessed in an attempt to draw conclusions of their observations known to the General public.

These messages appear a few times every couple of months, until six months later, NASA actually confirmed all previous statements. Finally it was officially announced that the probe had entered interstellar space, and a year ago — August 25, 2012.

The media has once again failed to indulge in loud headlines, which read that “Voyager” left the Solar system, and was not quite so wrong. However, NASA is still such bold claims — indeed, according to them, none of us will live to see the moment when this will no doubt become a reality.

This material is prepared as a response to one of questions submitted by our readers. Ask your questions on other topics you can access these links (About life in Britain, On the cultural life of London).

Where the Solar system ends?

As always, it is a question of terminology — it all depends on what constitutes the Solar system.

In the conventional sense, it consists of orbiting our star eight planets (mercury, Venus, Earth, Mars, Jupiter, Saturn, Uranus and Neptune), their moons, the asteroid belt (between the orbits of Mars and Jupiter), many comets, and the Kuiper belt.

There are mostly small bodies left over from Solar system formation, and several dwarf planets (including Pluto, which is slightly more than a decade ago was demoted to the category of ordinary planets). The Kuiper belt is essentially similar to the asteroid belt, but exceeds the latter in size and weight.

To imagine the scale of this part of the solar Empire, made use of the astronomical unit (a.e.) — one unit equals roughly the distance from Earth to the Sun (about 150 million km or 93 million miles).

Add to this a little more than 70 astronomical units — and we come to the first conditional the border of the Solar system and crossed Voyager, — the outer boundary of the heliosphere.

All of the above — planets, the Kuiper belt and the space behind it — is under the influence of the solar wind — the continuous stream of charged particles (plasma) emanating from the solar corona.

This constant wind forms around our system some semblance of an elongated bubble, which “displaces” the interstellar medium called the heliosphere.

As the distance from the Sun the speed of motion of charged particles decreases as they face increasing counter — pressure of the interstellar medium, mainly composed of clouds of hydrogen and helium, and heavier elements such as carbon, and dust (about 1%).

When the solar wind dramatically slows down and its speed becomes less than the speed of sound, there comes the first boundary of the heliosphere, called the termination shock (English — termination shock). “Voyager 1” crossed it back in 2004 (his twin brother “Voyager-2” in 2007) and, thus, entered the area called heliosheath (heliosheath) — a certain “threshold” of the Solar system. In the space of gliasite solar wind begins interacting with the interstellar medium, and their pressure on each other balanced.

However, as you progress further power the solar wind begins to weaken even more and eventually succumbs completely to the external environment — this conditional outer boundary called heliopause. Breaking her in August 2012, “Voyager 1” entered the interstellar space and — if we take as boundaries the limits of the most tangible effects of the solar wind left the Solar system.

But in fact, according to the generally accepted in the scientific community interpretation, the probe didn’t come even half way.

As scientists realized that the “Voyager 1” crossed heliopause?

As Voyager explores the space that no one had ever come to know, to understand exactly where he is — quite a difficult task.

Scientists have to focus on the data by using the signals the probe sends to the Earth.

“No one before has never been in interstellar space, so it would be like to travel with incomplete guides,” — explained the researcher of the project “Voyager-1” ed stone.

When information is received from the device, began to point to the changed environment around it, the scientists first started talking about the fact that Voyager is close to entering interstellar space.

The easiest way to determine overcame it coveted border — measure the temperature, pressure and density of the plasma surrounding the probe. However, the device is capable of making such measurements, stopped working on Voyager in 1980.

Experts had to focus on the other two tools: detector cosmic ray and plasma wave instrument.

While the first periodically the recorded increase in the level of cosmic rays of galactic origin (and the decline of solar particles), plasma wave instrument was able to convince scientists in the location of the device — thanks to the so-called coronal mass ejections that occur on our star.

At the shock wave following the emission of the Sun, the device recorded the oscillations of the plasma electrons by which it was possible to determine its density.

“This wave causes the plasma as if to ring,’ explained stone. — While the plasma wave instrument allowed us to measure the frequency of this ringing, the cosmic ray detector showed whence came the ringing — of the emissions on the Sun.”

The higher the plasma density, the more the oscillation frequency. Thanks for the second on account of the Voyager wave, in 2013, scientists were able to learn that the probe, already flying through the plasma whose density is 40 times higher than previous measurements. Sounds recorded while Voyager — the sounds of the interplanetary medium, can be heard here.

“Further moves “Voyager”, the higher is the plasma density, said ed stone. — Is it because the interstellar medium becomes denser as one moves away from the heliosphere, or is it the result of a shock wave from a solar flare, bi-Bi-si]? While we don’t know.”

The third wave, recorded in March 2014, showed insignificant compared to previous changes in plasma density, which confirms the presence of the probe in interstellar space.

Now, “Voyager 1” outside the most populous part of the Solar system and is now in 137 astronomical units, or 20.6 billion km from Earth. To follow him here.

So when he finally leaves the system? According to calculations by NASA, approximately 30 thousand years.

The fact that the Sun, accumulating in itself the bulk of the mass of the entire system to 99%, extending its gravitational influence far beyond the Kuiper belt and even the heliosphere.

After about 300 years, Voyager should meet with the Oort Cloud — a hypothetical (because no one’s ever seen, and scientists have only theoretical understanding about it) spherical region surrounding the Solar system.

In her “live”, attracted to our star, mostly icy objects consisting of water, ammonia and methane, they, according to scientists, originally formed much closer to the Sun, but was then pushed to the edges of the system by the gravity of giant planets. To go around us, they need goals. It is believed that some of these sites can get back and then we notice them in the form of comets.

Some of the recent examples — comet C/2012 S1 (ISON) and C/2013 A1 (McNaught). The first disintegrated after the passing of the Sun, the second passed close to Mars and left inner region of the system.

Hypothetical boundary of the Oort Cloud is the final frontier of the Solar system — the gravitational limit of the power of our star, or sphere of a hill.

Beyond the Oort Cloud no nothing — just the light coming from the Sun and similar stars.

Few years, scientists will gradually begin to switch off devices “Voyager-1”. The last is expected to stop working around 2025, after which the probe will send data to Earth for several more years, and then will continue their journey in silence.

To reach the limits of the hill sphere, sunlight, moving with the maximum known speed, it takes about two years. To nearest star — Proxima Centauri — it comes in about four years. Voyager, if his path led to it, it would take over 73 thousand years.

The Mission Of “Voyagers”

The official mission of the probes was to study Jupiter and Saturn.

The apparatus was able to study and photograph Jupiter, Saturn, Uranus and Neptune and their satellites and also to carry out unique research of the system of Saturn’s rings and magnetic fields of giant planets.

“Voyager-1” and started their “interstellar mission” and became the most distant from Earth, the object that has been touched by man. Now its task is to study the heliopause and the environment beyond the influence of the solar wind. “Voyager-2” in the next few years also need to cross heliopause.

On Board both “Voyagers” is the so-called Golden plates recording audio and video signals. They played map of pulsars marked the position of the Sun in the Galaxy — if found it will want to find us. In addition, the experts included in the record, that in their opinion, need to know the representatives of extraterrestrial life on humanity: photographs, greetings in 55 languages, including Greek, Hindi and Cantonese, the sounds of earth nature (volcanos and earthquakes, wind and rain, birds and chimpanzees, human steps, heartbeat, and laughter) and music — from Bach and Stravinsky to Chuck berry and Blind Willie Johnson and the traditional chants.