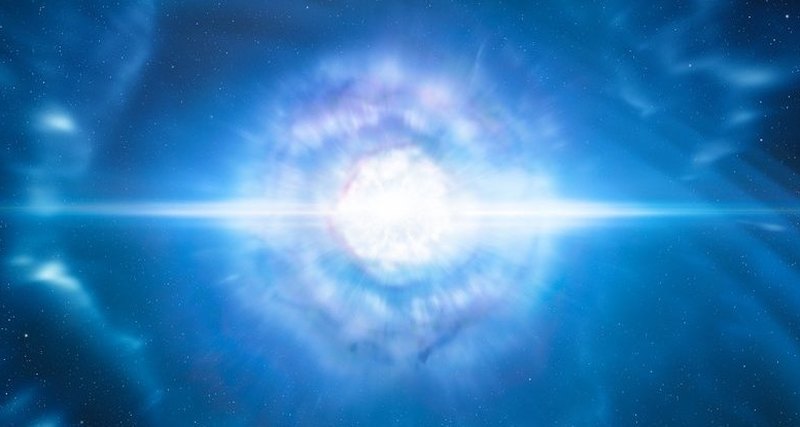 Imagine an area in space into which not a single particle of matter can penetrate. It spews incredibly powerful streams of radiation and shines with the power of thousands of ordinary stars. This is a white hole, the mysterious “antipode” of a black hole.

Black holes – one of the most mysterious objects of the universe. These unusual areas are considered to be the collapsing cores of dead stars and are widely known for their ability to hold any matter due to the most powerful gravitational attraction. As far as astronomers know today, black holes are so dense and massive that nothing can leave their event horizon. However, they are not the only type of cosmic “holes” at all.

Suppose you are trying to create a mathematical model that describes the space-time around a black hole. At some point you take and just … subtract the whole mass, all the real-life matter, from the calculations. What ultimately remains in the equation is known to theorists as a “white hole,” or a massless singularity.

As the name suggests and as many have probably guessed, the white hole is the opposite of the black one. For the first time its concept appeared in the 1970s, and astrophysicists do not get tired of playing with it to this day.

If the black hole event horizon prevents even light from reaching the breakaway speed, for white this area is an absolute, impenetrable shield. It is impossible to escape from a black hole, and it is impossible to penetrate a white one. The black hole absorbs the substance, the white – spews it. If we imagine the existence of such an object in the real world, then it will be an incredibly bright object radiating energy into space with monstrous power.

Until now, astronomers have never seen a white hole. Some physicists believe that in the real world such objects cannot exist by definition, since there are a number of reasons for this.

The first and most basic is the formation mechanism. We already have plausible models for the occurrence of black holes, even if it is just a hypothesis. However, for the emergence of a white hole requires a literal rewind of time, and it borders on science fiction. In fact, the object should begin with a singularity and move in the opposite direction until it gathers back into a star. This would require a decrease in entropy, which grossly violates the second law of thermodynamics.

With singularity, everything is also not so simple. The only way to determine the presence of a singularity is to determine its physical coordinates in the Universe. In other words, a specific section of the cosmos must initially be formed with a ready-made pattern in the form of a singularity. Astrophysicist Karen Masters explains that so far scientists have no reason to believe that such a “patterned” formation of the Universe took place at all.

When the myth becomes reality

But let’s imagine for a moment that the white hole did appear in the real world. According to mathematical equations, there can be no matter inside it in space-time, including a black hole. That is, even the size of this matter is not important: as soon as it somehow falls into the specified area of ​​space, the very fact of the existence of a white hole in this area becomes impossible. A lot of matter in space. In other words, if a white hole is born in the Universe, then there is a very short time. And if we assume that such holes were in the world from the very beginning, since its inception, then they would have been destroyed billions of years before at least a hint of life appeared in the depths of the primary ocean of the Earth.

So today white holes exist only on paper. However, it is worth noting that, until recently, black holes were also only a beautiful theory. In fact, scientists have even found a phenomenon in the universe that can be explained by the existence of white holes. His name is a gamma-ray burst. This is one of the brightest and most high-energy events in space, during which more energy is emitted in 10 seconds than our Sun can generate in 10 billion years!

Gamma-ray bursts are accompanied by a residual glow, indicating that this is the result of a star explosion. In 2017, astronomers were even lucky to observe such a surge caused by the collision of two neutron stars. This refuted a number of hypotheses – a few years earlier, scientists assumed that the source of gamma-ray bursts are the notorious white holes. However, during the discussion a rather bold, but more realistic idea was born: what if the Big Bang was actually just a supermassive white hole?

There is another interesting hypothesis, according to which a white hole is the final stage of development of a black hole. Probably, we do not observe them just because our Universe is quite young, and not a single black hole has yet had time to “grow old” sufficiently. But, be that as it may, the enthusiasm of astronomers does not subside, and they continue to look for traces among the vast expanses of space, indicating the presence of these phenomenal phenomena.