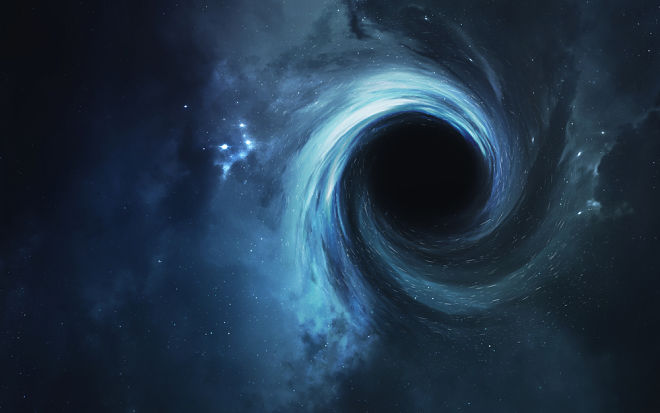 White holes, which are theoretically exact opposites of black holes, can make up a significant portion of the mysterious dark matter that is supposed to make up most of the matter in the Universe. According to researchers, some of the white holes could even precede the Big Bang.

Black holes have gravitational attraction, so powerful that even light, probably the fastest thing in the Universe, can not avoid their impact. The invisible spherical boundary surrounding the core of the black hole and denoting its point of no return is known as the event horizon.

In the 1970s, Stephen Hawking suggested that all black holes should evaporate the mass, emitting radiation. Thus, black holes that lose more mass than they receive should shrink and eventually disappear.

However, Rovelli and his colleagues suggested that shrinking black holes might not disappear if the fabric of space-time is quantum — that is, consisting of indivisible quantities known as quanta. The study attempts to combine the General theory of relativity, which explains the nature of gravity, with quantum mechanics, which describes the behavior of all known particles, into a single theory that can explain all the forces of the Universe.

According to the authors, when a black hole evaporates to such an extent that it can no longer shrink because space-time cannot be compressed into something even smaller, a dying black hole transforms into a white hole.

According to modern theories, black holes are formed when massive stars die in giant explosions known as supernovae, which compress their bodies into an infinitely dense point known as a singularity. Rovelli and his colleagues had previously calculated that a black hole with a mass equal to the sun would take about four times longer than the current age of the Universe to become a white hole.

However, in the works of the 60-70s it is assumed that black holes could arise in a second after the Big Bang due to random density fluctuations in the hot, rapidly expanding newborn Universe. Region, where these fluctuations are concentrated matter, forming black holes. These so-called primary black holes could be much smaller than stellar mass black holes and die forming white holes. But even microscopic white holes can be quite massive, just as black holes that are smaller than a grain of sand can weigh more than a moon. Now Rovelli and co-author of the study Francesca Vidotto of the University of the Basque country in Spain believe that these microscopic white holes are part of the dark matter, the nature of which is one of the greatest scientific mysteries.

In addition, Rovelli and Vidotto suggested that some white holes in this universe precede the Big Bang. Such white holes from the previous universe can help explain why time in the modern universe flows only forward.