Who salted the satellite of Jupiter? 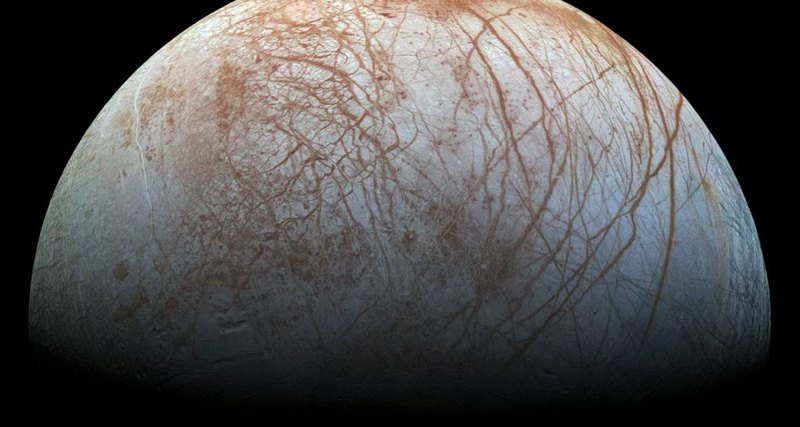 Salt was found on the satellite of Jupiter Europe. Astronomers believe that this makes it look like Earth and possibly livable.

The ocean, splashing below the surface of Europe, one of the moons of Jupiter, is currently considered by many scientists as the most suitable candidate for the search for extraterrestrial life inside the solar system. However, the ice hiding the ocean from prying eyes, prevents the detailed study of its composition. But the situation is not hopeless – it was still possible to find out something based on the study of the nature of the satellite surface.

In a study published in the science journal Science Advances, scientists showed that on the surface of Europe there is a well-known earth mineral (sodium chloride, sodium chloride).

And since the outer shell of the satellite is nothing more than a frozen ocean, scientists have concluded from this that there is a large amount of salt in its composition, which makes this medium even more suitable for theoretical discovery of life in it.

To make such a discovery, scientists did not have to fly to a satellite to taste it – for this it was enough to analyze the light reflected by its surface.

Back in 2015, NASA scientists Kevin Hand and Robert Carlson published a study that suggested that the dirty yellow veins visible on the satellite surface may consist of table salt, which acquired such a color under the influence of radiation.

In their experiment, scientists recreated the conditions on the surface of Europe in vacuum chambers, where the samples of the mineral were placed. By cooling the chamber to the required temperatures and pumping out the air, the scientists bombarded the salt samples from the electron gun in order to understand how the radiation on the surface of Europe changes the color of the mineral.

It turned out that many electrons were absorbed by the salt crystal lattice, due to which it acquired a characteristic brownish tint. This made scientists even more sure that they were right, but the color similarity could still be proof that salt is present on the surface of Europe.

They could be spectrometry, more precisely, the observation of the characteristic absorption line for salt in the spectrum of reflected light at a wavelength of 450 nanometers. “One of the charms of this radiation is that it can make the invisible visible,” explained the co-author of the new study Hand.

Therefore, Samantha Trumbo, a Caltech graduate with her supervisor Michael Brown, an astronomer known for suggesting the existence of a ninth planet in the solar system, decided to capture the spectrum of Europe using the Hubble orbital telescope.

And after four series of observations, which took place in May-August 2017, they found the required evidence.

“The agreement between the laboratory data and the data from the telescope turned out to be excellent,” says Hand. According to him, this indicates that the surface of Europe is indeed covered with sodium chloride, at least in the Tara region, saturated with young ice, which is believed to have formed this region relatively recently.

“If you could taste the surface of Europe, at least in this area, it would seem salty,” explained Trumbo.

“This is an excellent example of the synthesis of laboratory work, data from the Hubble telescope, radiation chemistry and planetary research,” said Reggie Hudson, an astrochemist from the Goddard Space Center, who did not participate in the study.

For many years, astronomers believed that another salt prevailed on the surface of Europe – magnesium sulfate, which is also called the English salt. The study showed the inconsistency of these assumptions – it turned out that the under-ice ocean in Europe rather resembles the Earth’s ocean. “It really changes our perceptions that have existed for the past twenty years,” explained Tremba. “If this sodium chloride is indeed so represented in the composition of the ocean, then it is much more similar to the one we have on Earth.”

However, scientists have yet to find out in what concentrations salt can be contained in the composition of the ocean. At least one thing is clear that the Tara region is an excellent target for landing the future NASA Clipper mission, which will be launched in the 2020s to the Jupiter system and fly past Europe 45 times. This area can become an object of study for a small landing module, which is planned to be sent as part of the expedition.