Why black holes are the brightest “lanterns” in the Universe 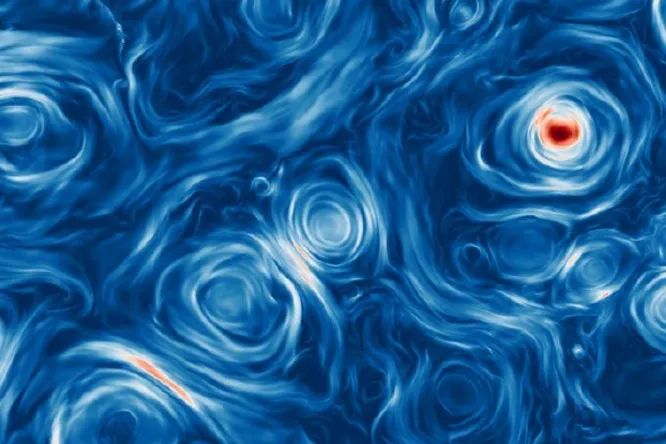 Ironically, the darkest regions of the night sky – black holes – can provoke the brightest radiation in the entire universe. By simulating the magnetic fields surrounding these mysterious objects, scientists have finally figured out the nature of the amazing cosmic glow.

Astrophysicists at Columbia University in New York have developed a model for the movement of electrons in magnetic fields. Flying through magnetic turbulence like a roller coaster, they can generate surprisingly intense radiation waves. This explains the fact why supermassive objects in space (orbiting black holes or neutron stars) sometimes glow so brightly.

Part of the glow is a result of the erratic movement of particles inside the dust and gas accumulation around black holes, heating matter to incredible temperatures through friction. However, in all this “whirlwind madness” charged particles begin to generate colossal magnetic fields that cause incandescent material to erupt into space in whole streams. All this, of course, is accompanied by an extremely intense glow.

But some of the light waves are too powerful and high-energy to be the result of a simple thermal effect. Apparently, their source is not at all the incandescent disk around the black hole. Astrophysicists claim that the secret lies in the so-called magnetic reconnection. It is a process in which magnetic field lines break and quickly reunite, accelerating particles to near-light speeds.

In the past, the chaos of turbulent magnetic fields has explained many anomalies around our own planet – for example, understanding where the energy of high-speed electrons goes when they collide with our magnetosphere. Luca Komisso, one of the authors of the study, assures that magnetic reconnection accelerates particles in a way that even a hadron collider cannot. The computer model showed that as a result of all this chaos, the energy required for extremely powerful light radiation is generated – this is how space is filled with cascading streams of light.