Why can not we make the second Earth of Mars 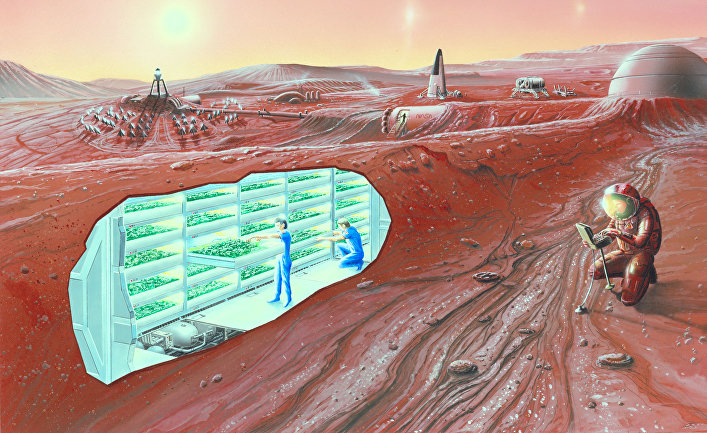 After 50 years after the first steps on Mars, its transformation is actively moving. Giant mirrors in orbit of Mars direct additional rays of the sun to the north pole and melt the ice there. Artificial volcanoes also help to warm up the planet. In places even plants brought from Earth grow – the red planet is green.

So Kim Stanley Robinson drew Mars in his trilogy two decades ago. Award-winning science-fiction author described the future, which is increasingly beginning to interest science. In their new work, scientists once again examined how much a person can transform Mars into a second Earth – it’s about terraforming.

This term is older than the astronautics itself. It was coined in 1942 by Jack Williamson in a sci-fi novel and means changing the planet and bringing its conditions to conditions close to the Earth. From that moment the literary space was constantly rebuilt – our Moon, Venus, Jupiter’s companion Ganymede and countless fictional celestial bodies – fantastic novels full of terraforming worlds.

Of course, and Mars, his natural state is not adapted to human life, and so he could undergo “planetary engineering”, Carl Sagan wrote in 1973. The famous astronomer put forward the idea of ​​melting the poles of Mars. To do this, it is necessary to intensify artificially the reception of solar heat, for example, growing dark plants there. Sagan noted at the same time that such a thing could hardly be realized in the near future.

At present, the average temperature on Mars is minus 63 degrees, while short-term positive values ​​are possible. In a new study, a team of scientists led by Bruce Jakowski from the University of Colorado asks the question: Is it possible to change the shell of Mars so that a strong greenhouse effect emanates from it and it warms up?

The shell is 96 percent carbon dioxide, according to researchers in the journal Nature Astronomy. Yet the Martian air is very sparse, the pressure at the surface is only six millibars, while on Earth it is 1014 millibar. Therefore, the authors analyzed in additional sources, where even Mars can store carbon dioxide and, at least theoretically, be transferred to the gas shell. To do this, they analyzed the current data of the Martian probes.

Indeed, at both poles there is dry ice, this is frozen carbon dioxide. Every winter it is deposited there on the ice surface. About one-third of the atmosphere is presented in a rigid form.

In summer, these “hats” conceal, and carbon dioxide passes into the gas state. The northern ice cap at the same time loses almost all of its dry ice, while at the south pole and in summer it remains part of it. According to radar data, in the south there is also underground dry ice.

Despite this, with the help of all these polar deposits it is impossible to influence terraforming, the researchers report. If dry ice turns into gas, the atmospheric pressure rises only by about twelve millibar.

Reduce the ardor of the colonists of Mars

Similarly, other carbon dioxide tanks behave in a similar way. Unlike the Earth, minerals containing carbon dioxide are rare on Mars. More than 50 millibars of gaseous CO2 can not be extracted from these reserves.

Although the entire surface of Mars can contain carbon dioxide, since CO2 molecules are retained on the surface of fine grains of sand. But this effect can contain a maximum of 50 millibar, provided that it will be possible to free these reserves on the entire planet.

“Even if all this can be brought back into the atmosphere of Mars, this will not be enough to heat the planet,” says Yakowski. To heat up to the thaw of water ice, air on Mars should contain about 1000 millibars of carbon dioxide.

The research can also reduce the ardor, for example, of Elona Mask with his ambitious plans. In the next decade, the head of Tesla and SpaceX plans to ship on the newest spacecraft thousands of Mars colonists who will have to build a city there. According to the plans of Mask, one ticket will cost about 200 thousand dollars.

Yakowski makes a sober conclusion – even if even more carbon dioxide is detected, most of the planet’s surface will have to be transformed. This is a project that can not be realized with the help of today’s technologies. After Sagan wrote about something similar in 1973, knowledge about Mars increased significantly. But the plan to change a desert planet with its gas shell is still the idea of ​​a science fiction novel.