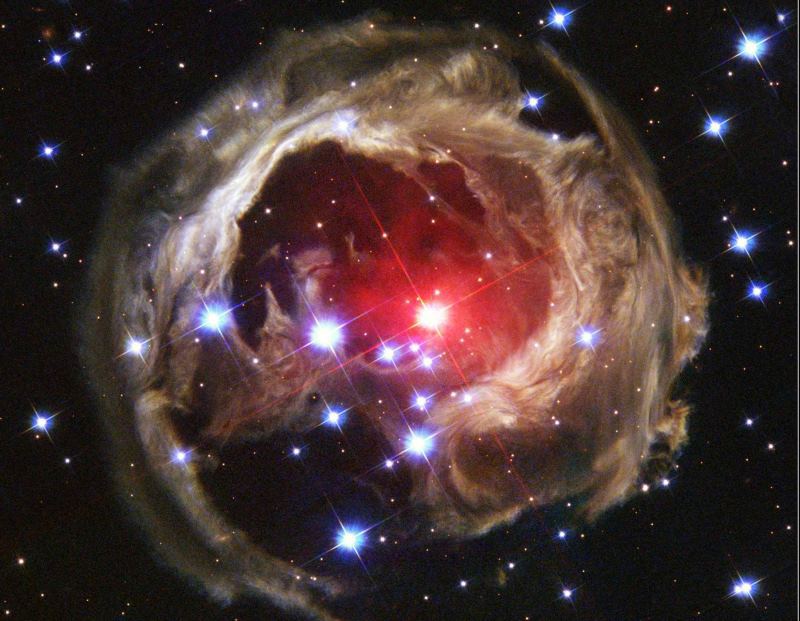 For unknown reasons, in January 2002 the outer shell V838 Mon suddenly expanded, making this star the brightest in the milky Way. Then again she was weak, suddenly. Astronomers have never seen such a starry flash.

The constellation of the Unicorn, until 2002, being known only to the astronomers, at the beginning of the new Millennium, we can say, famous. The thing is that in this constellation suddenly exploded star V838 Unicorn, without any preconditions for an explosion.

The photos of the explosion were obtained by the Hubble space telescope, which is 4 years (with 2002 on 2006) regularly shot star (or rather what was left of it). All these photos were compiled into a single video, duration 50 seconds.

But the most interesting is that scientists have not been able to understand why and how exploded, V838 of the Unicorn.

For a short time this star grew to an enormous size, and its luminosity before the explosion exceeded the luminosity of the Sun in 600 thousand times (if you accept the condition that both lights are from us at the same distance).

When this star is relatively young, which is inconsistent with the General rules of the formation of New. 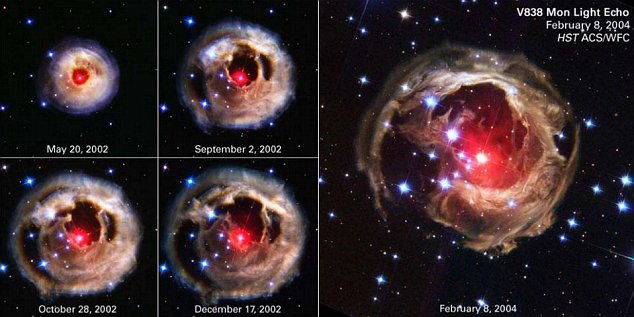 “All new stars (and novomodnye and cataclysmic variables) are close binary systems consisting of a white dwarf and a companion star, located on the main sequence, or reached during the evolution stage of a red giant star filling its Roche lobe. In such systems there is a flow of matter of the outer layers of the companion star onto the white dwarf through a neighborhood of the Lagrange point L1, flowing substance forms around the white dwarf, accretion disk, the accretion rate onto the white dwarf is constant and is determined by the parameters of the companion star and the mass ratio of stars-components of the binary system the composition falling on the white dwarf gas is typical for the outer layers of red giants and main sequence stars — more than 90% of hydrogen.”

The joint opinion of the European space Agency, the naval Observatory, USA and the University of Arizona says: “combined with the high luminosity and unusual behavior of flare, these options show that V838 of the Unicorn is an unknown type of stellar explosion for which we have no explanation.”

It should be noted that V838 of the Unicorn is 20 thousand light-years from us.