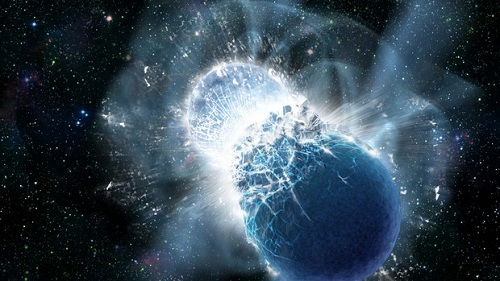 Astrophysicists discovered a burst of X-ray radiation in the galaxy NGC 4993. Three years ago, they detected the first collision of two neutron stars and their consequence – a kilon one. Scientists cannot yet say how and why these bursts are formed. An article describing the work of astrophysicists was published by the scientific journal Monthly Notices of the Royal Astronomical Society.

“No theoretical model predicts these bursts, and especially the fact that they can occur a thousand days after a kilonova explosion, which occurred due to a collision of neutron stars,” commented the results of the work of Eleanor Troy, an astrophysicist at the University of Maryland (USA) and one from the authors of the article.

Astronomers call keelon a powerful cosmic flare that occurs as a result of the collision of two neutron stars. For a long time they remained the subject of theoretical discussions, but three years ago, the LIGO and VIRGO observatories recorded gravitational waves, the source of which was a kilonova flash in the nearby galaxy NGC 4993. It is located 140 million light years from the Milky Way.

Observations of this event, called GW 170817, confirmed the theorists’ assumptions and indicated that such events are one of the main sources of gold and other heavy elements that form the basis of the matter of rocky planets.

Further observations showed that the strength of the kilonova glow reached a maximum about 160 days after the discovery of gravitational waves. After it began to fade, gradually becoming invisible to observers on Earth.

Surprises from neutron stars
Analyzing recent images of the galaxy NGC 4993 and data from the Chandra orbiting telescope, Troy and her colleagues found that the remains of GW 170817 continue to produce high-energy X-ray photons. The theories that describe the evolution of kilonon and gamma-ray bursts did not predict this development.

Scientists cannot yet say for sure what exactly became the source of that radiation. On the one hand, they could have been emitted by a jet – a narrow beam of matter that occurs when neutron stars collide. Scientists do not exclude the possibility that the source of such photons could be clouds of gas that surround the remains of the kilonova. They could be “shaken up” by the shock wave generated by the explosion.

Regardless of which of these theories is closer to the truth, the very fact of the existence of such particles of light suggests that scientists still do not fully understand the physical processes that govern the formation of flares during the merger of neutron stars and the evolution of their collision products.

Scientists hope that further observations of GW 170817, which Chandra will conduct in December this year, will help them get some of the answers to these questions and clarify what role kilonons play in the replenishment of heavy elements in the Universe and the general evolution of galaxies.