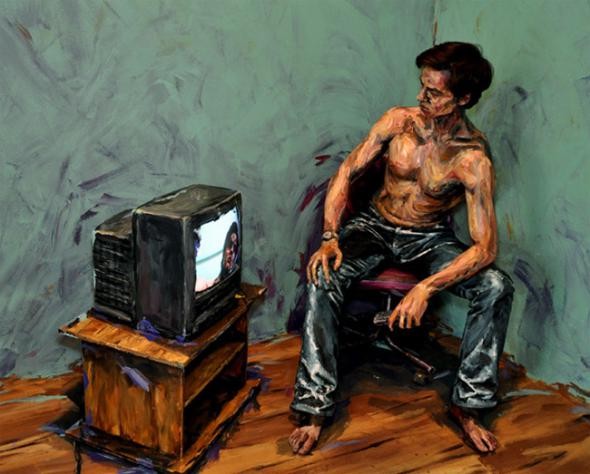 Man-made objects that surround us and which we use, is inanimate, not alive and everybody understands that. Cars, clothes, furniture, dishes. However, it is believed that while things not alive, they can accumulate both positive and negative energy and sometimes that energy manifests itself in different ways.

Below are the stories of people who are faced with unusual behavior of inanimate objects, as if those were their own consciousness.

– I’m on the same typewriter he worked fifteen years. Got used to it, as to the particle itself. And should anyone in my absence “knock” on it, I’ll know about it immediately, making just a few keystrokes away.

How? Don’t know, but just feel that my machine has been in someone else’s hands, she told me about it “tells”…

Somehow behaves differently, has a different sound, another soft movement of the carriage, the other elasticity is key, she like breathes a different spirit. And it takes some time, it “comes” to itself, and becomes again only my familiar, even native.

My Alt — old, a good tool is a living creature. I have a double case, in which I travel I drive not only viola, but violin. So, viola didn’t like it. He few days at me offended for it, I can feel it and the sound of one hand and still somehow inexplicable.

– My computer has developed a rather interesting relationship. I even briefly to work on the other, standing in the same office or in a completely different, he somehow finds out and… jealous, gives me to understand that is barely noticeable naughty, a little slower, as if reluctantly, hinted at what may fail or be wrong.

I have to deal with him in my mind to talk like this: “okay, buddy, I’m sorry, I love you more than any other work on the other had just needed…” And it calms him, when he “forgives” and then works as usual fine.

My “Volga” for more than twenty years old, broken, enumerated by me a hundred times already to the screw. It would have to go to a landfill, but the other is not, and this runs gradually. And what is interesting: I sit behind the wheel in a good mood — and she’s acting kind of cheerful, fun, easy and quick to listen to me, sometimes, I think, responds to the traffic situation PLI on my desire before I begin to switch or steer, guessing my intentions.

But every time I get behind the wheel in a bad mood or it will go bad I have been in the road as my “old lady” immediately perceives it and behaves by becoming me: tediousness, cranky, and even take and stall with absolutely no technical reasons. I’m not even trying to repair it, just sit, keep quiet, calm down, listen to cheerful music (for it’s time and she will calm down), turn the ignition and it start instantly, go on. It perfectly responds to my condition, and this has long been no doubt.

– My TV does not have a relationship literally from the first days in our family. First, I was against that damn box in the apartment.

Secondly, bought his wife, and I already saw it and wasn’t happy, but tolerated. Thirdly, once was home alone, turned on him, and he worked about ten minutes normally, then suddenly dazzled, flashed… I went and “taught”, banged on it with his fist. He even passed out.

I have it in the hearts of the Mat gave off. The wife came. I said nothing to her. She turned it — earned! Well earned! And not even blinked once. As soon as she stepped into the kitchen tired. I to the wife say: “I Bought stuff — not working.”

Back in the living room, the wife says to him: “Well, honey, what’s wrong with you?” Clicked, turned, earned. And so he behaves for ten years: can’t stand me and does not hide it, and my wife loves it running like a new bastard.

I don’t know how “generally”, but I have in particular was a case of who goes out of memory at this day, although it has been more than a quarter century. I then served as a pilot of the first class, officer. To us in part came of a new machine “MiG”. Commercially tested, proven, but for us new, so my flight it was like a test.

Took off normally, PaineWebber at low altitudes, on average, came close to the limit, all is well. Began to maneuver, and pow! The engine stalled. Run — silent. Second time — nothing. The third is silent! I already commands the flight Director to leave the car. And I feel sorry for: the new girl, the first flight of I — as and in front of the whole regiment will kill such a beauty?

Run for the fourth time, everything falls. Me to eject — a piece of cake. And then I said to her, “Well, my dear, but Oh-WA-Ah! I shall be saved, but you’re so beautiful, new, strong, you fly and fly, why to die is it in vain?! Well, Yes-WA-ay! Swim together”. And on your own risk start the engine one last time. And — earned!

I brought a brand new “Moment” from the fall, leveled, so smoothly put it… got — wet — up, power- on zero, consciousness like a dream, and the soul sings! Then he wrote, told, explained everything, except how “persuaded” the car to start, as convinced her that she is good and she is destined for a long life. And no, I’m not given, so her whole “life” and flew, knowing that it was me then realized that we became friends with her forever.

Valentin Vasiliev, the master of sports

I’m a motorcycle racer, you have to drive a variety of machines to get used to him or learn the nature of the iPhone or subordinate, like a living horse, sometimes do not have time. But I always have time, so it’s “caress” of his iron horse and quietly (to others my voice is not heard) to persuade him, to somehow appease, or something. Well, what I’m saying?

Pat, stroke, touch and whisper, “Hey, buddy, let’s get you and this will. You better help me, let us together make this difficult. I’ll be with you attentive and caring, and you better not let me down…” Here something and mumbling. Understand? Well, definitely I can not say, but secretly believe that he understands.

Before, when I didn’t do it, anything happened, and good results I have not achieved, and began to talk — the results from rose and accidents became less. Think about what you want, but I know me and my car understands and helps.

– I live on the twelfth floor, but the first one on your don’t go if you have companions — all right, food. Never alone.

The fact that our Elevator has a vendetta against me. We moved to this house when I was 12 years old, and I lift Skoda: on the walls, wrote, stopper door, broke out the microphones, burned the call button and sometimes even urinated in the cabin.

And once entered the Elevator, the doors closed and the Elevator did not move and did not open. Me from the cabin six hours, experts were rescues and couldn’t understand why that stuck.

Pulled. But I still do not understand “hint” and the next morning went from my floor to the first floor. Stuck between the twelfth and eleventh again in four hours.

Rescued me again, and then months later do the lift or something. Went with fellow travelers, they’re on the eighth floor got out, I went ahead and stuck again between the eleventh and twelfth.

All, after this incident, I realized that the Elevator has a vendetta against me for all of my boyish pranks upon him. For four years I and home from home I go only on foot, fearing that the Elevator doesn’t care and will punish you, if I were in the cockpit alone.

Me, maybe someone will laugh and say: here is the twist the fall of the banks with cucumbers, zucchini, carrots, tomatoes (I do a lot of spin, two-family) and every time each jar directly in the voice to persuade: “Well, you’re my good, you are my beautiful you are my new girl, hang in there, cheer up, not open, not Srivasa, until spring, wait…”

So gently, continuously, and persuade, as a prayer read. If what people get distracted, stop to talk-to beg, even though everything starts — always open, I’m such Bank neugeborene, close and put in the first place open earlier than all the others. Tempted — stick to spring, nothing in them is sour, and those that neugeborene — be sure to slam, I’ve noticed how many times. They understand the request or not, I don’t know, but the fact can confirm.

– Oh, you know, computers are so skittish thing… When we in the savings Bank established the first car, she was flexible, patient and accommodating. But — obsolete, set a new mark. But this has got some annoying. Summer, all stuffy, and it gives the screen: “I’m hot. Stay five minutes”… And then the pensioners in the queue is buzzing. Wait. Nervous. Involved.

After a couple of hours, same thing. It’s hot! We began to talk aloud, to be indignant, so he became a “sweat” after an hour, it became in spite of us to relax. We are already pissed. Then the bastard says: “Prevention — 2 hours!” Fortunately, already forty minutes before the closing of the Sberbank. Well, all operations ceased, the people somehow reassured. Head and said: that type will not work, change it. Changed, this is a normal character, we are friends with him.