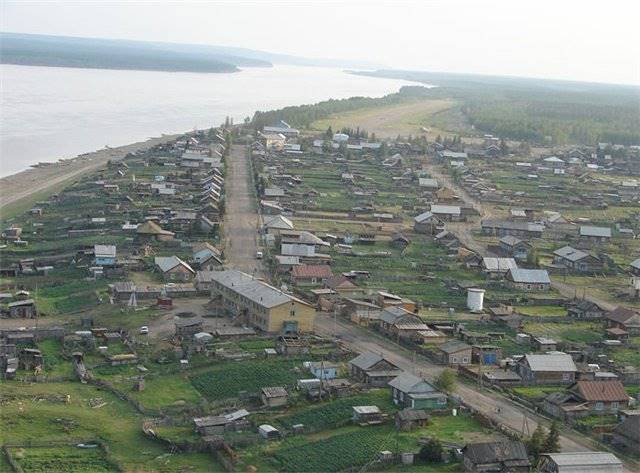 Ayaya village once was located in the Ust-Maysky ulus (Republic of Sakha, Yakutia). If you fly around the neighborhood of the settlements on the helicopter, will be clearly seen strange stripes, devoid of any vegetation. Most of all they resemble rock carvings found in the valley of Nazca in South America.

Unfortunately, the network there are no photos of the place. The bands are found on the Google maps as the exact spot where the village of Ayaya.

Till the 50-ies of XX century the village Ayaya did not differ from other settlements of this type. However, in the time of Khrushchev in accordance with the plans for the consolidation of the collective farms it was abandoned. People moved to other towns, and in the abandoned village started to happen strange, mysterious things.

After some time, Ayaya was wiped off the face of the earth. Presumably, the reason for that was the fire. According to another version, the houses of the abandoned village was washed away by flood.

However, the local cemetery remained intact. Have not touched it nor floods, nor fires. But the locals try not to go near the place where once stood the village, and there are my reasons.

A resident of the village of Ust-Maya Stepanov says:

“My father told me that with my own eyes repeatedly witnessed terrible things, the otherworldliness which had not the slightest doubt. According to him, in AE lived a female shaman. The fact that she was there, confirmed by the old residents of Ust-maja.

My father, collecting one day with my friends on the former site of the village there is a wild honeysuckle, standing apart from all on the river near the village, noticed at some distance from itself, a lonely elderly woman. He said it just at the moment when she stared at him.

Just spotted the old woman saw, as she reached out to him with his right hand forefinger and silently beckoned to him. The father did not approach her, but rather sensing that something was wrong, went to his. There he told about what he saw.

Imagine his surprise when he was told that he might have seen the spirit shaman, who lived early in AE. Her Ghost has watched the residents of Ust-Mai, who come here to fish and collect berries.”

Said V. Stepanov and another story about a now abandoned settlement:

“My father once went with a friend to Ayaya to fish. Catching it on a lake near the village. They sat together in the boat, and the friend’s father on the bow of the boat, and his father at the stern. The ship for no reason at all why all of a sudden began to sway.

And suddenly the father noticed that the friend who might have shown something in the bottom right hand of the father. What was the surprise of the Pope, when he saw beside him emerging from the river, the hand that rocked the boat. And obviously with the purpose to turn it. Realizing that panic, no nothing, but will only aggravate the situation, he was asked to move a friend, then coolly took the paddle and whacked them rock the boat the hand.

As soon as he did, as the water burst transparent creature in human growth and leaving small footprints on the water, as if them threw a stone-a pancake, with a wild roar ran through the water to the opposite shore.

The creature then walked along the river and groaned from the pain. People are still afraid to ride on the lake and believe that if you take out left behind by the former residents belongings, took their human misfortune”.

Another “attraction” anomalous zones are those weird strips that are perfectly visible from a bird’s flight. For the first time drew attention to them in the 1980-ies the geologist p. P. Serkin. One day he was on a plane from Ust-Mai in Allah-Yun. The plane had to deviate from course and fly over the spot where once was the village of Ayaya. Then he noticed the stripes.

Here’s what he says about his discovery:

“What I saw was confusing to me, and only years later, when they began to talk about UFOs and unsolved mysteries of the world, I learned about the landing strips in the Andes and seem to understand what it is. It is the summer of 1978. After 45 minutes, the flight from Ust-maja — Allah-Yun start at the bottom of a large Dzhugdzhurski spurs of the mountain range.

On uneven hilly surfaces become visible immediately three wide, about 30-40m bands, very strangely located. One long, two short, and they all intersect in one place. The point of their intersection is a small mountain lake, into which flows a stream.

Strips absolutely free from vegetation, they do not have any residue: no trees, no shrubs. The Central line, rising from the lake on the mountain slope, as if shines through the rocks, then three hundred meters or four hundred passes along the ridge of the mountain, capturing both of the slope. After parting with a comb, leaving the North in the distance. Because of the rough terrain the end of the runway is not visible from the aircraft flying at an altitude of 800-1000 m.

In this area at that time was not towns, roads. The forest is poor, the climate is very severe. But where’s the band? If this is the glade and made them surveyors or employees of forest fire protection, at the direction of a chief of a mad band pass, ignoring the difficulties of the terrain, across the lake, rocky cliffs and along the ridge of the mountain?”.