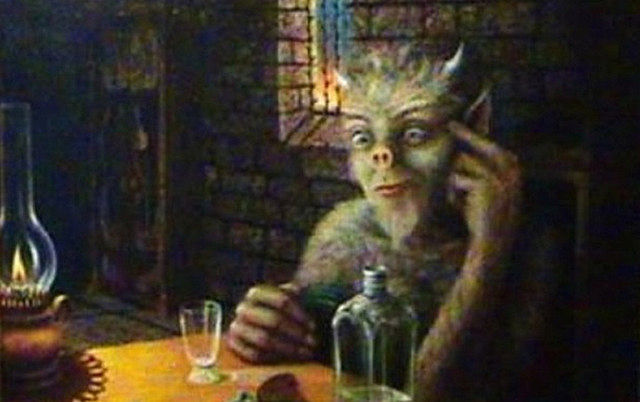 Outstanding Russian folklorist Alexander Afanasiev, who lived in the last century, wrote: “talk About a house in Russia that he sometimes allows himself of leprosy for no apparent reason, of course, because of its playful character. But in this case it is enough to specify ” — and all goes well.

So, in the same house, “says A. Afanasyev,” he beat the cats, throwing them than falling. Once he grabbed the cat and threw her to the ground, and the woman that hour and discuss: “Why leave? Is the master’s attitude? We are without a cat can not survive”. Since that time the house ceased to touch cats.

Another famous folklorist and ethnographer of the XIX century Sergey Maksimov in the book “evil, unknown and the power of the cross” describes, in particular, recurrence of a poltergeist, which took place in a village house in the Vyatka region in the middle of the last century. The owners of the house “as any sit at the table… someone will start to throw furnace coats or curtains to throw pillows. And survived the fright of the owners of the house.”

“Similarly, it was impossible to live in a hut in Skopinsky district of the Ryazan region for the reason that as soon as the family sits at the table, and flying cups from the oven or from the shelf of sandals… In St. Petersburg on our minds on the Fontanka, near the Kalinin bridge, there was a restless house… ten or fifteen Years ago on the same house at the Foundry (in the same city) pointed out all the Newspapers, a crowd of curious gathered to him in so many that the police intervened”.

Observing the antics of the invisible have become so numerous groups of witnesses that to restore public order, public notice, had to ask policemen.

In another of his books — “wings of words” — S. Maximov says: in 1666, the demon of invisibility showed up in Moscow in the poorhouse-at-Kulishki, which was located near the Ivanovsky monastery. Preserved Chronicles, telling about this fact.

“In the women’s workhouse, — writes S. Maksimov, — there was a demon and would not give no rest day nor night, and dragged to the shops with beds in the corners shouted and knocked, saying (please note, the poltergeist his voice!) all sorts of absurdities. Against him came the elder Hilarion of Suzdal and began to beat him the normal way of prayer.

But only start formal reading, the devil with of the shelf shouted: “Not you, calogera, came to kick me out?” Begin night the elder read the prayers in casting out a devil, and the devil shouts at him: “you’re in the dark, to cry.” And hard zastuchat on the shelf, and threatens: “I come to thee”.

But Hilarion was so gentle that soon even the enemy praised him: “this Good monk before God lives” — and in conclusion, the unequal fight was forced to confess that his name was Ignatius that he was “physically and princely family, but that the nurse sent him to hell, out of the poorhouse, he can not leave, because against their will came here…”

Despite his statement, a poltergeist in a few days, suddenly ceased pererugivanie with Hilarion and somewhere from the poorhouse vanished. All was quiet.

Modern Russian folklorist Valery Zinoviev gathered in the Chita region the whole collection of messages about meetings of Siberian peasants with “an invisible evil force”.

He included them in a book published after his death in 1987. It’s called “Mythological stories of the Russian population of Eastern Siberia.

Here are just a few of these messages.

Recalls Theodosia Obukhova from the village Cantil: “Opposite our house was. Mistress of the underground climb — somebody’s skirt pulls, pulls with her. Suddenly the steel behind the stove to hear the squeaks. How fuck the old man, the husband of the hostess, with a brick hit on the head”.

But the message of the inhabitant of the village Gazimursky Plant Victor Kuznetsov: “the Night will close with a blanket — it you fall, the blanket. Will you follow him — it will fly!”

“The dirty tricks. Then ash, cow feces are mixed into the food… Suffered with them. Then someone taught the priest to call. Pop came the prayer reads. The people in the house gathered. And Akulka with Tweety (so called Siberian poltergeists) put the stove in the ass with a rolling pin.

Pop scared people too. How come all in public! And Akulka with Tweety the steps of the porch dismantled — all head over heels with him and rolled”. That shows eyewitness of the events Elena Kudryavtseva from the village of Lomy.