Explosion outside the window or face of evil spirit 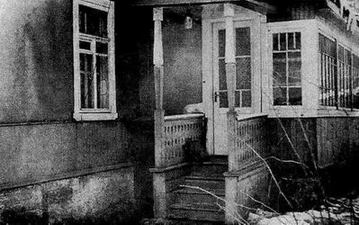 The strange incident happened in the city of Vsevolozhsk in thirty from Leningrad on February 11, 1988. Here in the private wooden house once upon a time there were mother and the 13-year-old daughter. Routine Soviet inexact family. In other, not absolutely routine… The woman was fond of spiritism and had a reputation for the real medium.

Not earlier, than for half an hour prior to the beginning of the Time program it seemed to it that someone knocked on a window once and as if bones of fingers. Sometimes so those who do not know about a call knock. A.A., naturally, right there looked out in a window, attentively looked extensively, but was nobody anywhere. She was surprised by lack of a sound of steps. A.A. right there left the house, went down from a porch on the earth and at rather bright light of the electrolamp lighting a wooden porch and all around began to consider traces. Except her characteristic, any others was not. And snow became crackling towards evening and the approximation of any person to the house in such weather was always well heard from within. A.A. in some bewilderment entered the house.

Soon turned on the TV: the Time program began. Having looked at it a little, mother with the daughter began slowly to be going to sleep. And here explosion outside the window sounded! And right there following — a sound of the broken glass and jingle escaped. Hit the girl who was near a window as if with current.

Mother and the daughter, clear, very much were frightened. Thought about a shot! Turned off light in the room, then looked out in a window. There in external glass almost round huge hole with two cracks departing from a circle up and down gaped. Went outside, neither traces on snow nor which of people around the house was observed.

Next day came to them familiar with the camera. He close in the tracks examined the scene and photographed traces of “crime”.

Slightly ellipse, almost round opening gaping in the lower right member of a window was the most interesting. Diameter of axes of an ellipse — 23 and 24 centimeters, and the lengthiest axis it was aligned the Earth’s surface. The edge as if of the glass which is cut out around settled down perpendicularly to its surface. Internal glass of a window that opposite to a circle, did not break, but in it there were as if vplavlena or vpechena chips of the broken glass. On the external surface of that internal glass shallow-shallow glass powder was as if raised dust. 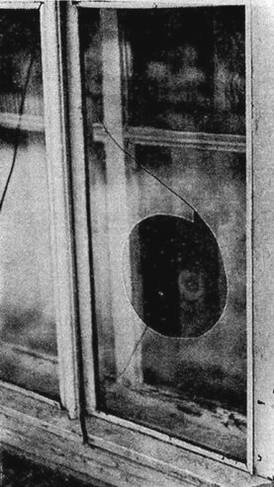 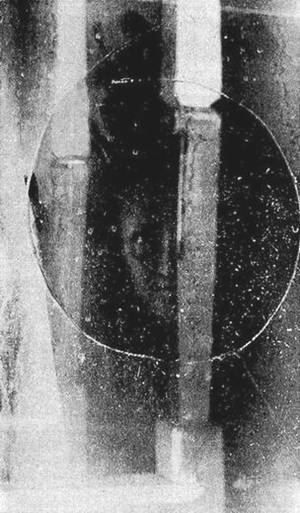 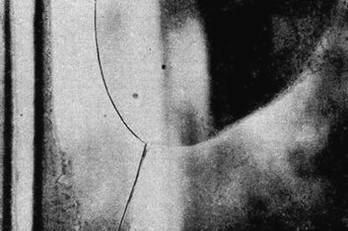 When the photographer developed and printed a film, with surprise found out on a print what he did not see in the view-finder — in the broken hole the face of the strange woman, attentively and ominously peering from a porch in the room was looked through.

By close examination of a picture, it is possible to notice curious features. For example, slightly above and to the right of bottom edge of the external thermometer on a light surface of a column as if examines the second eye of this illusive woman. Is slightly higher than the second eye, approximately from the level of the middle of the thermometer and to its upper edge, it is possible to see the second nose, very large in comparison with the woman’s nose. But then its the second, right, as if an illusive eye becomes belonging to other person with a large nose. In this case an eye is perceived as widely open mouth with two very large top cutters and with very shallow lower teeth!

Nobody learned that woman that it was shown in the photo. It and remained unknown, having been, perhaps, what should be defined as a face of evil spirit.