Far-sightedness – what is it? Flying in and out of trance 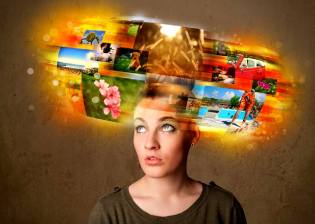 The French writer André Morois (1885-1967) has a mystical novel, The House. Its heroine regularly dreams that she visits some ancient castle, walks through its rooms, admires the surrounding landscape from a high tower. And each time she meets the same inhabitants. It seems to her that since this dream of hers is unchanging, the castle must correspond to something real, and she tries to find it. And she finds it by chance on the outskirts of Paris, recognizing it immediately. But she is also recognized. The chateau is rented out: its owners want to move in, because almost every night a woman’s ghost appears in it. The servant peers at the guest and recognizes her as the very same ghost!

The most curious thing is that there is no mysticism in Morua’s short story – he only artistically retells an actual case that took place in England at the end of the century before last.

For several years, Mrs. Boulton had the same dream: in it she visited a beautiful old house, walking in the park surrounding it. She did not know where the house was, but she could describe the place in detail.

In 1883 the Bulton couple decided to go to Scotland and rent a house for the summer. Such a house was rented by Lady Beresford. Mr. Boulton arrived before his wife to sign the lease. The owner of the house honestly warned him that since some time in the house began to appear the ghost of a little lady, not causing any harm, but for some reason took a fancy to her bedroom. They even had to make repairs to find out if the house had a bricked-up room where the unfortunate lady had died.

When Mrs. Boulton joined her husband, she recognized the house from her dreams with joy and amazement! Almost everything about it matched what she had seen in her dreams, except the parlor, which in her dreams led to a suite of rooms, but here there was none. The butler explained that the recent renovations had been made.

A few days later, the Boulton couple paid a visit to Lady Beresford. And she exclaimed in amazement: “You are the lady who visited my bedroom!”

Your ghost has broken into my bedroom!

Thus, perhaps for the first time, reliable witnesses recorded the phenomenon when a person’s consciousness (let’s not use mystical terms yet) separates from the body and is transported to a considerable distance, continuing to consciously (excuse the pun) record the surrounding reality. Mrs. Boulton’s case stimulated similar experiments in a number of European psychiatric research societies. French researchers G. Durville, Colonel de Rocha, and Ch. Lancelin were the most advanced in this direction. In particular, Lancelin made experiments with a certain Mr. X who had the same abilities, and he was able to control them deliberately. We will call him Pierre for convenience.

At the age of 28, Pierre became seriously ill. And when he recovered, he suddenly discovered that by diving into a trance he could make his consciousness leave his body and travel freely through all rooms of the house, including locked ones, and observe the housemates.

Then he began to visit his acquaintances, who lived quite far away from him, in this way. One day this led to a rather amusing result. An acquaintance of his, a young woman with what was once said to be psychic powers, expressed her displeasure to Pierre on meeting him:

– Monsieur Pierre, you pay me strange visits!
– What do you mean by that?
– Three nights ago, your ghost broke into my bedroom!
– You must have been dreaming.
– I was awake, the night light was on, when I felt someone tugging at my hair. I turned to my husband, but he was sound asleep, with his back to me. Then I saw you standing beside my bed, pulling my hair. I got angry and started to wake up my husband, and you laughed and disappeared!

During further experiments with Pierre, the woman’s husband was awake, but saw nothing. Nor did the dog react to the night visitor.

Roughly the same thing happened to another acquaintance of Pierre’s, whom he woke up with a light pat on the cheek. Her husband heard the sound, but didn’t see anyone, either.

During the experiments that followed, Pierre, without leaving the small Norman town where he lived, visited his acquaintance in Paris.

The lake was not there.

Subsequently, with the participation of Lancelin, Pierre conducted several public séances in which he demonstrated, in the researcher’s words, “the ability to send his consciousness to a predetermined place.

Unfortunately, these experiments were interrupted by World War I. Only almost a century later, they were revived at the Stanford Research Institute in California, led by Professors G. Puthoff and R. Targ. The test subject was an American of Swedish origin, Ingvar Swann. In different sources he also appears as Ingo Swann or Ivar Sunny. Let us focus on the first version.

Swann claimed that if he is told the longitude and latitude of any place on Earth, he would “fly” there and describe everything that happens there in real time. Naturally, such a “craftsman” immediately interested the military. A man able to invisibly penetrate to any hidden object of a potential enemy anywhere in the world – one could only dream of this!

The simplest tests for long-range vision within the institute Swan passed, and then he made his first experimental “flight”. Researchers gave him the coordinates of Lake Victoria in Africa. Swann went into a trance and described to them “the feeling of flying over the water and then landing on land. According to the map, it was in the middle of the lake, but Swann insisted on his vision. When checked with a more accurate map, it turned out he was right.

“Flight” to a secret facility

In subsequent experiments, Puthoff and Targ used military money to send their assistants to the most exotic places, sometimes thousands of kilometers away from the institute, and suggested that Swan see with his “remote” vision what they saw with their own eyes. In the vast majority of cases, the coincidence was complete!

As for the specific room, it was more difficult. Swann only easily oriented himself where he had been before. At least with the Moscow Kremlin the trick failed – Swann simply “got lost” in some museum rooms.

Still, Swann managed to get into one semi-secret Soviet facility. The researchers gave him the coordinates of a place in the Indian Ocean where Swann saw the following: “At first sense it is an island, maybe a mountain, the top of which is higher than the clouds. The ground is stony. To the west is a ridge of clouds. It is very cold. I see buildings arranged in the right order. One of them is orange. It has a radar antenna on it. Two big white cylindrical tanks. To the northwest is a small landing pad. In front of the building are two or three trucks. There are mountains to the west, a plain to the north, the landing pad and the ocean to the east.”

This was a very accurate description of Kerguelen Island, where the Soviet-French geophysical observatory was located and where Soviet meteorological and geophysical rockets were launched.

By the way, it is unlikely that Swan could have been given the exact coordinates of the Soviet secret facilities. And if he had used Soviet maps, he could have ended up in Podolsk instead of Moscow. By the way, let me remind you that the railroad distances from St. Petersburg are not counted from the city, but from Mga, to confuse a potential enemy.

The experiments of Puthoff and Targ with Svan, as well as other test subjects who also showed good results on remote vision, were published in such serious journals as Nature and Proceedings of the IEEE. And, of course, in closed reports to Army sponsors.