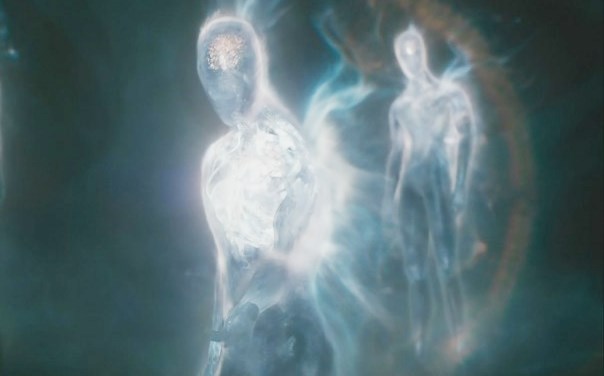 The most incredible and, at the same time, the most common element in all the studied cases of visions during clinical death, and yet had the most profound impression on people, had a meeting with a very bright light.

Usually at first this light seems pretty dim, but then it becomes brighter, until finally it reaches an unearthly brilliance. However, even when this light is (usually characterized as “white” or “clear”) becomes indescribably bright, many say that he doesn’t hurt their eyes, or dazzle them, and not stopping to see other items surrounding them.

Despite the singularity of this vision, none of the patients had no doubt that it was being alive the being of light. In addition, this creature had a personality. It was definitely some kind of personality. The love and warmth that emanated from this being to the dying person, it is impossible to describe by any words.

Dying feels that this light surrounds and carries it, he feels quite relieved and heat in the presence of this creature. He feels an irresistible attraction to this light and inexplicably attracted to him. Interestingly, at that time, as the description above of the glowing creature is amazingly constantly, identification of this being different people are very different. It depends mainly on the religious environment which shaped the person, upbringing and personal beliefs.

So, most of those who are in the faith or in their education are Christians believe that this world is nothing like Christ, and sometimes cite biblical texts in support of the correctness of his understanding. The Jews call light “angel”, but in both cases it is obvious that people are not meant that the being had wings, played the harp, or at least had a human shape and appearance. There was only light, and everyone tried to explain that being perceived as a messenger or guide. People that believe not before, far from the religious life to just say they saw “a luminous being”.

The same term is used the Christian woman, which, apparently, did not think that it should be in Christ.

Shortly after his appearance, the creature comes into contact with the came person. It should be noted that this is the same connection straight type, with which we have met before in the description of the person, being in a spiritual body can “catch thoughts” of those around her. In this case, the people also claim that they did not hear physical voices or sounds coming from the creatures, and he answered him to audible sounds.

Rather, it was witnessed that was the direct transfer of thoughts, but in a clear form that any misunderstanding or false in relation to the light was impossible. Moreover, this feeling takes place even at the person’s native language, but he understands and perceives instantly. He can’t even translate what is happening during a near-death state exchange of ideas on the language in which he needs to explain himself after his return to life.

The next stage experience clearly illustrates the difficulty of translating this silent exchange of thoughts. The being of light almost immediately conveys a particular idea to the person to whom it appeared in a dramatic. Usually, the people with whom I spoke, trying to formulate the idea in the form of a question.

The first two formulations, emphasizing “readiness” may at first glance seem different from the last two, in which the emphasis falls on the fact that “reached”.

However, the most likely issue here is that just everyone trying to Express the same idea. This assumption has a confirmation in the story of one woman who said the following: “the First thing he told me was sort of the question: — “am I Ready to die?” or “What has been done in my life, what I’d like to tell him?”.

Moreover, even in the case when the question is retold as something quite different, he, in a final sense after it is explained, has the same meaning. For example, one man said: “the Voice asked me a question: “is it Worth it, that is my life, the time spent?” That is, if I believe that the life I had lived until that moment was really wasted from the point of view of what I learned now?”.

At the same time all insist that this question is so profound and sums up, sounding all emotional stress is specified completely without judgment. Everyone agrees that no charge, no threat in the question; they only felt universal love and support that comes from the light, regardless of what may be their answer. Rather, it seems that the content of the question makes them think about their life, cause them to be Frank.

If you like, it is a question of Socrates, who asked not to obtain information, but in order to help the person asking to lead him towards the truth about himself. Referring now to the several testimonies of this extraordinary creature is derived from the first hand.

“I heard the doctors said that I died, and then I felt like I was falling, or how to sail through any black, a closed space. Words cannot describe it. Everything was very black, and soon in the distance I could see the light. Very, very bright light, but first, a little. He became more and more room as I approached him.

I tried to get closer to this light, because I felt that it was Christ. I wanted to get there. It wasn’t scary. It was the opposite — more or less nice. As a Christian I immediately associated the light with Christ, who said, “I am the light of the world.” I said to myself, “If this is so, if I must die, I know who awaits me in the end, there in this world””.

“I got up and went into the other room to pour a drink, and it was at this point, as I was later told I had a ruptured Appendix, I felt very weak and fell. Then, as if everything swam, I felt the vibration of my being, torn from the body, and heard beautiful music.

I was floating around the room and then through the door was moved to the veranda. There seemed around me began to gather some cloud, and soon the pink mist, and then I swam right through the barrier as if it wasn’t there at all, towards transparent clear light.

He was beautiful, so brilliant, so radiant, but he is not blinded me. It was an unearthly light. Really I have not seen anyone in this world, and yet there was concluded a special personality. It is beyond doubt. It was the light of absolute understanding and perfect love. In my mind I heard: “do you Love me?”.

It was said in the form of a specific question, but I think that the meaning can be expressed as: “If you really love me, come back and finish in my life what he started”. And all this time I felt surrounded by overwhelming love and compassion.”

“I knew I die and there’s nothing I can do, because no one can hear me. I was outside my body, there was no doubt, I could see it here on the operating table. My soul came out! At first it was very hard, but then I saw a very bright light. It seemed that at first he was a bit dull, but then became a powerful glow. Just a lot of light spill around. And the heat from it was passed down to me; I felt warmth.

The light was bright, yellowish-white, and more white. And extraordinary brightness; he covered everything, and yet does not disturb me to see all around: the operating room, doctors and nurses — everything. I clearly could see, and he’s not blind. First, when there was light, I didn’t really understand what was happening. But then he asked me like asked me a question, am I ready to die? It was like talking to someone, but I did not see who.

The light spoke to me, that voice belonged to him. Now I think that the voice that spoke with me really understand that I’m not ready to die. You see, for me it was kind of a check, the most remarkable of my entire life.

I felt really good — secure and surrounded by love. The love emanating from him — it is something unimaginable, indescribable. It was so easy! And besides, he had even a sense of humor… Definitely!”.

This meeting Dr. Moody describes as “perhaps the most incredible of all elements in I studied communications, which has the most profound effect on personality.”

Most people describes this experience as the appearance of light, which is rapidly increasing in brightness; and all identified him as a kind person, filled with warmth and love, to which the deceased flechette a sort of magnetic attraction. The identification of this creature, apparently, depends on the religious beliefs of the individual, it has no recognizable shape. Some call it “Christ”, “Angel”; all, apparently, understand that it is being sent from somewhere to accompany them.

Here are some of the stories about this experience:

“I heard that the doctors said I was dead, and then I felt that would have failed, even as if floating… Everything was black, except that in the distance I could see the light. It was a very, very bright light, but initially not too large. As soon as I approached him, he became more and more”.

Another person after death felt that he “swam into this pure crystal clear light… And here is what he says.

“On earth there is no such light. I actually haven’t seen anyone in this world, but he has a special identity, it definitely does. It is a light of perfect understanding and perfect love. I was outside of my body, this is undoubtedly because I could see my own body there on the operating table. My soul came out! At first, I felt this very badly, but then there was this bright light.

At first it seemed that he was somewhat dull, but then it turned into a huge meadow… at First, when the light came, I wasn’t sure what was going on, but then he sort of asked, am I ready to die? Almost always the creature begins to communicate with the deceased (more through the transfer of thoughts than words). It’s always “says” he is the same, what is meant by those who experienced it as “are you Ready to die?” or “What have you done in your life that could show me?””.

Sometimes, when the creature dying sees something like a “flashback” on events of his life.

However, all stress that this creature is in any case not lead to any court about their past lives or actions; it simply encourages them to reflect on their lives.

Dr. Osis and Haraldson also noted in their studies and some meetings with such a creature, noticing that the vision of light is “typical quality otherworldly visitors, and preferring after Dr. Moody to call creatures that are visible or felt in this world, just “white pieces” and not spiritual beings or deities, often perceive them as dying.

Many call these creatures Angels, and point out their positive qualities: they are bright, full of love and understanding, and to instill the idea of responsibility for his life.