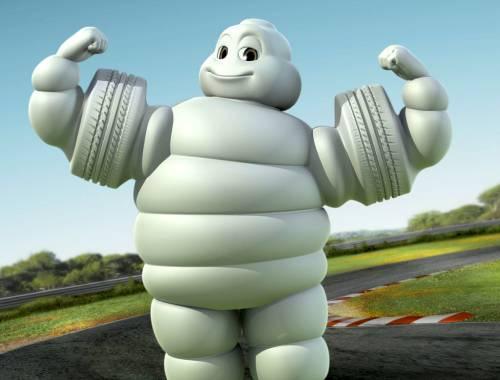 Small green or gray men with huge black eyes – is not this kind of association that occurs when you mention the word “aliens”? However, there is another category of aliens, a massive appearance of which was observed in remote places of Spain, Argentina and the USA in the 70s of last century.

Anthropoid creatures in ringed blown suits, which eyewitnesses compared with Bibendum, a mascot of the French tire manufacturer Michelin, associated with several incidents with UFOs, are still poorly understood. 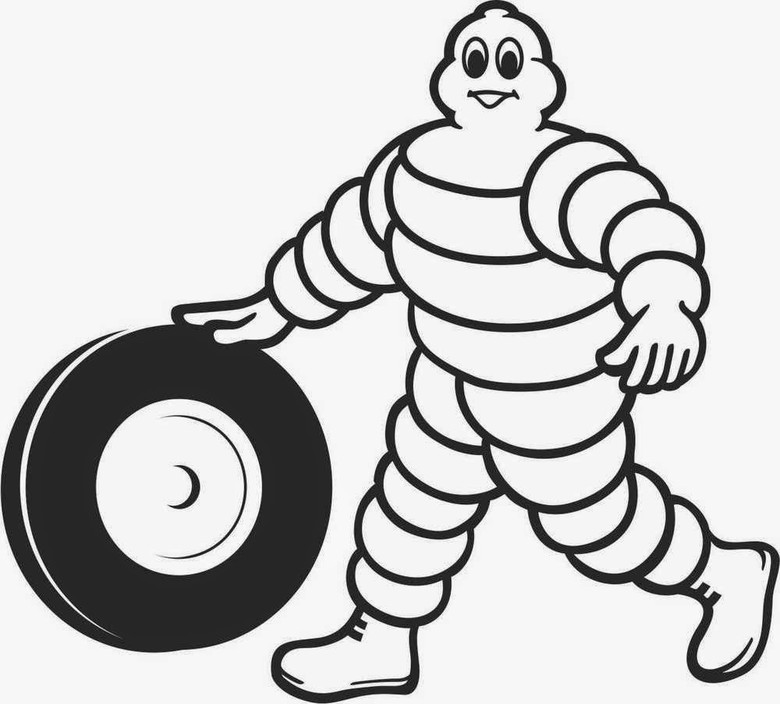 One such incident occurred on Sunday, March 14, 1976 in the province of Castellón in eastern Spain. Vicente Corell and his wife Carmen were returning from the CIR-7 recruiting station, where they accompanied their son to serve in the marines, on small roads to his hometown of Almenara.

About 10:00 in the evening the pair faced a strange phenomenon – in the night sky to the left of their “Reno 4L” appeared a brilliant white oval object.

Believing that these are the headlights of a car on a nearby hill, they continued to move along the road, but did not manage to drive several tens of meters, as something strange began to happen. Alarmed spouses in the light of their car headlights saw a “glowing tornado” rising above the ground and were amazed when they saw that it was a man.

“I believe he had two legs,” Vicente Corell told Vicente Corell, an outstanding Spanish researcher, Juan Jose Benitez, who investigated the case, “because he reminded me of a human figure. But since the legs were close to each other, he was more like a column than a human. He was tall, handsome and dressed in one-piece overalls … ”

The outlandish creature stood on the ground like a soldier with a stare and looked directly at the car. The initial interest of the couple was replaced by fear, as the headlights of their “Reno” suddenly went out, leaving them in total darkness. The smell of burning wires soon filled the passenger compartment, and Corell was forced to stop. When all this happened, the object disappeared in the dark. The electric system of the car was burned, and Vicente and Carmen Corell could only guess what had happened.

Drawings of eyewitnesses after a meeting with strange creatures

According to the researcher Benitez, Carmen Corell much better remembered all that is happening than her husband, and added an interesting detail: a suit on a tall figure was made of “narrow and slightly puffed stripes” from the neck to the waist. She compared the object with Bibendum, the world famous symbol of Michelin.

UFOlog Manuel Odige, reviewing this case, said that the notorious Michelin, in addition to having a physical body, also emitted its own energy. The fact that the figure grew in size as the car approached, indicates that its electrostatic charge, ionizing the air, increased to the point of saturation until it began to produce light.

In addition, the figure, consisting of negative ions, did not touch the ground. Therefore, it can be assumed that the car could come into contact with the electrostatic charge of the object, as a result of which the humanoid lost its brightness due to the fact that its potential decreased to a value insufficient for ionization, and the machine became negatively charged, which led to a short circuit.

Although the comparison with the person “Michelin” will cause some people a skeptical smile, but on the Spanish peninsula such a creature was seen more than once. In the summer of 1960, Miguel Timermans, a school teacher from Prado del Rey in southern Spain, went for a weekend on his Lambretta motorcycle to the city of Jerez. 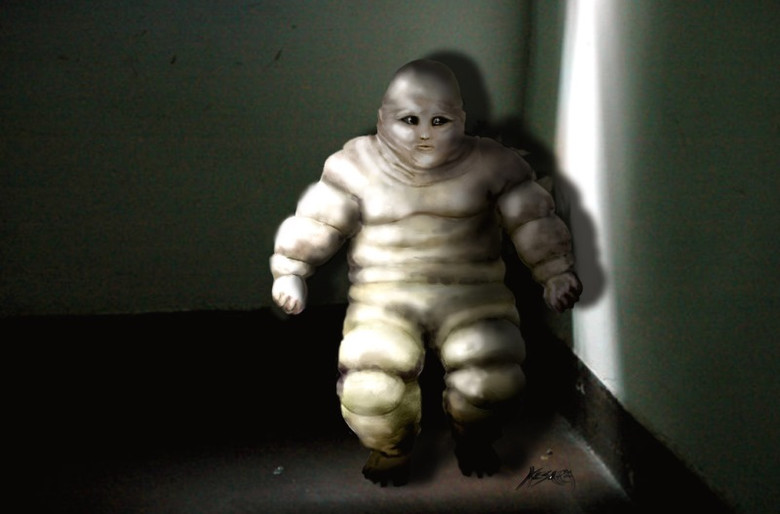 It was a bright morning, and the visibility was unlimited. When he climbed the hill between Prado del Rey and the city of Arcos, suddenly a colossal figure appeared on the roadside, dressed in a “swollen” red overall. The giant creature moved slowly toward him along the edge of the highway. The shocked teacher was overwhelmed with such an overwhelming sense of fear that he threw his motorcycle right in the middle of the highway.

Remembering this event, Timermans noted that the costume of the creature consisted of “concentric rings”, which also reminded him of the “Michelin” person. The incredible figure swung forward, took several steps. And then the teacher saw that behind the giant there was a second creature a little over a meter tall, in exactly the same suit, but one of his legs embraced something resembling a glossy black “boot.” He moved very awkwardly, as if he was limping.

Mysterious figures crossed Timerman’s path diagonally and disappeared after 30 seconds. Picking up his motorcycle, the teacher went to the place where he saw the creatures for the last time, but did not find any traces. This amazing case was published in the journal “Stendek”.

These strange “Michelin-men”, apparently, were not limited to roadside walks along the Iberian Peninsula. Figures in inflated overalls were seen in the North American state of Kansas in 1976 and in Argentina in 1972. The last case associated with them became the most famous due to the fact that his hero Ventura Museiras, a seventy-year-old night watchman from Argentina, very quickly grew new teeth and even increased the level of intelligence.

Surely there were other incidents, but because of language barriers, they remained unknown to the UFO community.

Researcher J. Cresson received a certificate from a resident of the French city of Dinan named Droguet, who one evening in May 1955 returned home from the cinema and was struck by a ray of blue-green light emanating from a strange object floating above the ground.

Next to the object were two more creatures, dressed in voluminous metal overalls, “like a person” Michelin “. On their heads were large helmets, and both figures in gloves were occupied, as it seemed to the eyewitness, by the collection of soil samples. 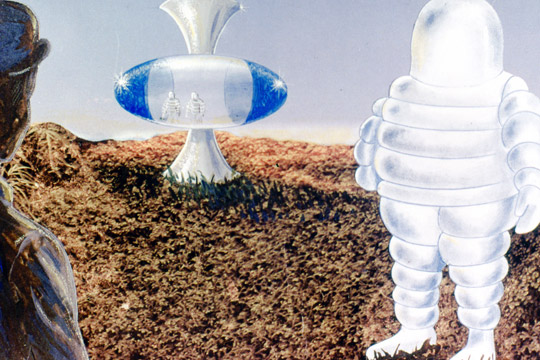 One of the creatures stopped, peered into the “porthole” of the nearby ship, and the frightened man realized that inside there are the same inhabitants. He said that at that time he felt a state familiar to many eyewitnesses of close contacts of the third degree.

He desperately wanted to escape from there, but an unknown force kept him in one place, and he realized that the humanoids knew about his presence. He then thought that they could even pick up one or two people instead of collecting soil samples.

Fortunately, his fears were dispelled when the “Michelin people” returned to their ship and cautiously climbed up the stairs. The man was intrigued by the movements of these, probably space visitors, who reminded him of the behavior of divers at the bottom of the ocean, and their “boots” with metal rings. The ship began to rotate with great speed and slowly rose into the air. Only then did Monsieur Trichet move, as if freed from invisible power.

Gripped with horror, he closed himself in his house and for a long time could not come to himself. The man was silent about this event at the age of fifteen and spoke about it only when the authorities asked him to do it. An article about this case was published in 1970 in the June issue of the prestigious French edition of Lumieres dans la Nuit.

“Michelin People” will reappear in a few years in yet another remote place, off the east coast of Africa on the island of Madagascar. In 1968, a farmer collecting grass for his animals, faced a brilliant oval object with a transparent windshield, “similar to the Peugeot 404 windscreen. Inside the object, the farmer saw two small figures, “dressed in costumes, as in the advertisement” Michelin “.

Realizing that they were being watched, the figures decided to retire, and the farmer was blinded by a white flash of light with a rush of heated air. The oval UFO just disappeared, it did not take off to the sky to distant stars, but simply disappeared. The farmer, a person with an impeccable reputation, did not hesitate to tell his story to the local police, who immediately left for the site and found traces of radiation on the ground and, more worrisome, on the farmer’s clothes.

In Madagascar, there was another intriguing case, which although it was not associated with figures in blown overalls, but was suitable for describing such events.

On a sunny day in December 1976, a unit of 23 soldiers of the French foreign legion, participating in an intelligence operation in the desert area of ​​the island, saw a luminous object of a smooth oval shape with no identifying marks, having the “color of a new coin shining in the sun,” which fell very quickly On the ground and caused a powerful shock wave. The soldiers were paralyzed, just like Monsieur Tracts in 1955 and an unnamed teacher in 1960.

“We all saw how the device landed and flew away again, but none of us noticed the loss of time,” said one of the legionnaires and added: “We got rid of paralysis after the object flew away. We have been in the same place all this time, but when we checked the clock, it turned out that we did not notice how three hours had passed. ”

This had serious consequences for the detachment, which could not contact the radio with the base, and legionnaires were forced to reach it on foot.

Brazil, which is the UFO’s hot spot, also has a history associated with these outlandish humanoids, which occurred on August 30, 1962 in the Italian community. Three friends left the local cinema around midnight, and when they reached the corner of the street, their lively conversation was interrupted by a sharp whistling sound. They looked up and saw in the night sky an object hovering about 30 meters above the eucalyptus grove, which was 50 meters away from them.

According to Luis Gonzaga, one of three friends, they were sent to a small creature, which has a strong resemblance to “a figure from the tire factory” Michelin “. Eyewitnesses saw a fat figure with a big head, short arms and legs, dressed in a suit made from a material resembling thin skin, rhythmically paced to them.

Two young men fled with screams of horror, and only Luis Gonzaga remained on the corner, who could not move. A minute later this state passed, while the stocky fat man disappeared, and the object in the sky became so bright that it lit up the entire district. The light from the UFO diminished, and Gonzaga again managed to move. After this incident, the eyewitness suffered from headaches all month.