There are different kinds of ghosts (wandering, frightening, trying to start a conversation, etc.), but Japanese hungry ghosts are very unusual.

One of the most famous ghosts in Japan are the so-called “hidarugami” (Hidarugami), which roughly translates as “hungry gods.” They say that these are the souls of those who died of starvation, lost their way in the mountains, and whose bodies were never found.

Depending on the region hidarugami can call the words “hidarutami” or “darashi” or “gift”, but their behavior is the same. They wander in search of someone with whom you can share your agony of eternal hunger. Such a curse is imposed upon them. And it is natural that most often their victims are the same lonely travelers.

There are many stories about how travelers, walking along lonely mountain paths, suddenly embrace an insatiable hunger, like they never experienced. This sensation, as reported, is absolutely overwhelming and almost irresistible. It is often accompanied by unexplained fatigue and numbness of the limbs, as a result of which the victims of the “hungry ghost” attack fall to the ground, not understanding what is happening.

If the traveler is not helped in time, all this is believed to almost certainly lead to his death or a state of complete insanity, and after his death the traveler will become such a hungry ghost. 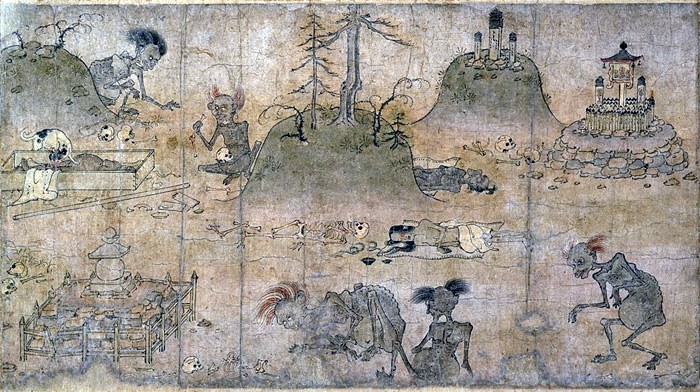 According to legend, you can avoid this sinister fate, if you have at hand a small piece of food, even one grain of rice will do. And even such a small amount of food can quickly remove the supernatural feeling of hunger when it attacks.

That’s why even nowadays, Japanese, going alone on mountain trails, take with them at least a little food, even if they have to travel a very short distance.

Curiously, in the tradition of Shiga prefecture on the island of Honshu, hidarugami is described as a zombie. For them, these are aggressive creatures that can attack and maim a person by eating his flesh to satisfy his insatiable hunger. To protect against them, you should always keep rice balls at hand.

Although all this may seem like folk tales, there are actually a lot of stories of people who might actually have encountered hungry ghosts. One such story came from a man named Senkichi, who in 1736 set out on a solitary mountain path.

When he was later found by other locals and brought to his village, he was in a very frightened state and told a terrible story about the attack on him of a group of hungry ghosts.

In another story of the same years, a traveler named Mizuki Shigeru was also attacked by a horde of nasty hungry ghosts. He managed to escape from them, grabbing a handful of rice from his bag and throwing rice on the ground. Hungry ghosts were distracted by the search for rice and the man managed to escape.

A variety of Japanese maps and travel guides of those years contained warnings about hungry ghosts and was strongly advised to take with them rice. Also throughout rural Japan, there were many legends associated with hungry ghosts.

In Wakayama prefecture there is supposedly a deep hole in the ground near the mountains of Okumotori and Shokumotori, in which aggressive hidarugi sit in ambush. Also in many parts of Japan on mountain paths there are special holy places in which you can pray that you are not attacked by hungry ghosts.

It is widely believed that these stories are only the embodiment of a severe famine, which has suffered for centuries in the rural part of Japan. Nevertheless, such stories were distributed even in relatively rich areas of the country. Fortunately, hidarugami is considered a relatively weak spirit against the backdrop of many other representatives of Japanese evil spirits.

Sometimes, hedaruges are credited with abominable and also very hungry spirits under the name “gaki” or “pret”. These creatures came to Japan from Tibetan mythology and are eternally tormented by thirst and hunger in their otherworldly analogue of Hell.

Gaki are most often described as humanoid creatures with terribly swollen bellies, strange heads and useless little mouths, with which they are constantly looking for something to eat. Gaki / prets represent the lowest form of existence, into which turn after death envious, greedy and generally bad people.

They are tormented by such a strong hunger that they will look for anything to eat it. Including feces, vomit, corpses and so on. They desperately lick at the slightest drop of blood, but their hunger never becomes saturated.