How to talk with the family? 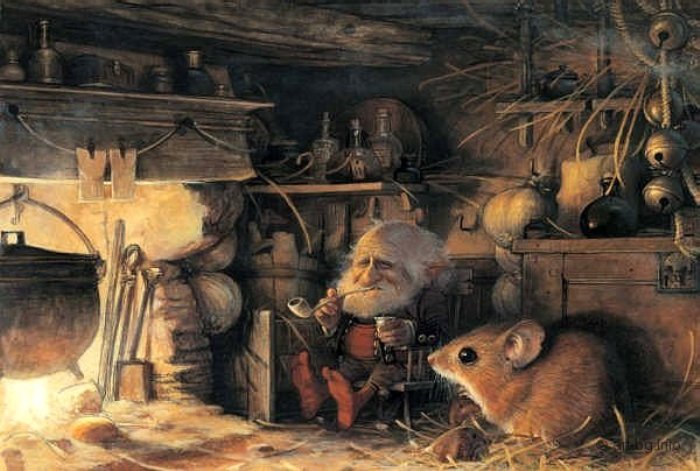 The desire to feel comfortable in your own home naturally. So the people at all times tried to make their home really their castle.

And because our ancestors believed that the well-being of their home and family depends largely on the brownie, then over time developed certain rites and rituals, to ensure that in peace and harmony to exist with the family.

Some of these rituals are described below, our ancestors claimed that they work.

At all times in Russia it was believed that peace and prosperity at home depend on its Keeper — house. It houses, according to these beliefs, supervises, cares about the welfare of the family. Therefore, in order not to lose the happiness and prosperity in the house, people were trying to coax brownie and call it location.

Moving to a new residence, the household must worship in all corners of the house and to invite the house to follow them with these words (also the plot can be read, and when you are already in the new house):

Master-sir!
Let’s go to a new home
A rich yard
On life, on existence, on bogactwo!

After all, if not to invite a brownie into a new house, he voluntarily not h” will be able to move there. Traditionally it is considered that house his whole life lives in the same house and may leave it only if the owners will call him to a new place of residence.

Also the house can leave the house if he will in no wise cast out, which is a special ceremony. But do so only with malicious brownies, which are strongly annoy and harm their owners.

Also, when you move to a new place of residence, so the house went along with you, you can do some actions. You need to take the old broom to knock them on the doorstep and turn to brownie:

Hostess-house, on skids sit
New place to ride,
And wives.

Do not forget to bring with you to the new house this broom.

You can also call the house from the old house in these words:

Father, my master,
I have my house.
I’ll get you a new mansion,
Chamber light.
Come with me,
Without you, we will not be happy.

Later, when the family moved to another house, the first lunch in their new home do the following. Take a loaf of bread and the first slice cut off from her, buried in the ground in front of the house or hide in the right corner of the attic, while saying:

Kormilitsin, Kormilitsin,
Come to the new house
Bread here to eat
And the new owners listen.

It is clear that in modern apartments to the attic, you may not get to. Then put a slice of bread in a secluded corner of the apartment (preferably on the right), saying the same words.

Also on the first day of his stay in the house owners can buy a house and thus. Going to bed, put it in a secret place in the kitchen some treats for him, such as a bowl of milk, a piece of bread or sugar candy. Then read the conspiracy:

Deblock-domovenok,
Come into my domeracki,
Bread to eat,
A new mistress to listen.
Eat, help yourself,
I’m trying to burn
Happiness save, home guard,
Strangers out.

On the second day of stay in the new house do not interrupt the “dialogue” with the family. Feed and hydrate it: on a plate put the honey, cookies and candy, then pour the wine. In the same secluded place leave a treat for brownie by reading the plot:

Hozyayushka-father,
Prirechnyi, bratushka,
Perhaps in my new house
You will not close it,
Help yourself to a sweet,
Stay with me pokladem.
I’m trying to burn the house guard,
Strangers out.

As in the previous day, a treat crossed. Before bed three times read “our father.”

To garner further support and protection of a house, on the third day after the move, also lodged brownie: in a shot glass pour vodka on a plate put a piece of bread, meat or fish. Read over the treat the next plot:

The house-father,
Gray-haired old Svetochka!
Eat a lot,
Listen to me.
Help in the house,
to live richly and contentedly,
So every day you fatten
yeah didn’t postval,
To sated and drunk you, Yes, fun.
Happiness and good fortune sazivi,
money privechali,
Strangers are not blowing,
our happiness save.

As in the previous day, a treat crossed. Before bed three times read “our father.”

If you want to continue your relationship with the family is not spoiled, put in the nooks of the house pieces of refined sugar to the brownie could always eat. Because of this, he will not lose his good-will.

But then we must not forget about the house, or he may take offense at you and starts to play pranks. In order not to lose its location, sometimes feed a house — fortunately, he’s a spirit picky and will be grateful for the simple meal.

Give him a piece of bread, sprinkled with salt, and beside put a Cup of milk. If your house has a basement, then put a treat for brownie there, if not, then choose some secluded place. While saying these words:

The host-father, sir-house.
I’m sorry,
Take care of my stuff,
My beast take care of.
My treat take.

But in a house it is recommended to treat the first of every month. Then you will not lose it’s location and your house will always reign Supreme harmony. In some secluded place, put a piece of candy, a cookie or a piece of sugar, and the first day of the following month remove them and give to animals. Then the house will be favorable to you.

With the departure of home from home

If all members of the family or the owner of the house will at some time to leave your home, they can ask the house to look after their farm and take care of it. To do this, from the comfort of home, you should contact brownie with the following words:

The owner of the house, take my cattle,
Feed and POI, watch
and with home field prigoni.
Be my words are strong
and modeling, harder than a rock.
Amen. Amen. Amen.

Moreover, this plot can pronounce all the people and not just the owners of the cattle, since his words have acquired not only direct but figurative meaning. That is what was meant was please take care of everything that is in the house.

If you are entering a newly built house, which by definition cannot be a house, you can try to attract a new house in this way. Bake bread and surrounded his whole house, as well as walk around the home. Of fresh fir branches make a nest, in the middle of it lay the bread, saying:

Come, Lord, into my house brownie
Yes such, that the horses mane scratched,
Children in the cradle rocked,
Will be together happily ever after,
Each other not to forget!

Also a house can attract the following words this is exactly the same as in the previous description):

The owner-house,
Come to my home
A housewarming party to celebrate,
Together to live happily ever after.

These plots should draw a good house (as we have already mentioned, there are malicious brownies) who will respond to them and will come to your home.

Conspiracy on someone else’s Brownie

It is considered that a house is a good spirit, the Keeper of home and hearth. But there are evil goblins, as a rule, do not have their own housing. Usually spirits that harm the hosts in his house, for which he was expelled from there.

Or is it brownies, which were not initially evil, but for some reason their house was destroyed (e.g., burned in a fire, and left his owners forgot or did not deem it necessary to call a house to a new place of residence, with the result that he was homeless. Brownies, too, could have become embittered and begin to hurt people.

Evil spirits usually restless wandering and looking at whatever dwelling to invade. To protect yourself from such house, once a year, at Christmas, read the following conspiracy:

House with corners,
in the corners of the icon, okladne logs,
Doors with constipation, with the Lord’s fence
with a host family.
Mind of evil, another brownie. Amin.

Restless brownies can also make shapes of different animals, so in the old days it was not customary to allow strangers in the yard of unknown animals, since their appearance in the house could get an evil spirit.

To become friends with the family

In the old days people in order to appease a house and establish a relationship with him, the night went to the barn, wearing the shirt inside out and blindfolded bandage in three layers. Becoming in the middle of the barn, they uttered the following words:

Sosedushka-domaszewski!
A slave to you,
Low head carries.
Don’t keep it in vain,
And get with it conditions conducive to the,
Show yourself to him in its appearance,
Start a friendship with him
Yes, serve him, lig the service.

If the answer man has heard the cry of the rooster, it meant the refusal of a house. Then, not tempting fate, needed to go home. If the same response was heard a rustle, this meant the location of the house to the speaker.

When the dissatisfaction of the House

Brownies do not like lazy and messy, as they do not approve, when there is no agreement, when its inhabitants quarrel and shout at each other.

In such cases the house might start to get angry at the owners, and this is manifested as: disappear without a trace, things, and owners can not find them, the hair people have very confusing at night and in the morning they find it hard to comb, rattles and Cutlery, no cause for falling objects and creaking doors cabinets.

All this suggests that the owners something angered house and they should think about their way of life. After all, a house — Keeper domestic happiness, and he is angry not because is naughty, but out of concern for the happiness of their owners.

So listen to his “advice” and try to establish their way of life and relations between family members, as well as butter brownie, pour him some milk in a saucer or put the cream, put the saucer in a secluded area and say:

You are my master and I your employee,
Be gentle to me, sir-house.

Then the house will cease a lot of noise and mischief.

The loss of things

If you lost something, you can ask for help from brownie. To do this, take the ribbon of any bright color and tie it around the chair legs. Are you going to say:

Then tell me in a whisper above the ribbon:

House, golovushka, play,
After playing I give.

Most likely, the same day thing.

When you stop for the night in an unfamiliar place

If anyone had to stay overnight in an empty abandoned house (and in the days of our ancestors such cases were not uncommon) or just in a strange house, a man was supposed to contact brownie with these words:

Otherwise the house could be offended by the intruder and night much to scare the guest, or at least confuse his hair.