In Japan, a wooden statue weeps, bleeds and works wonders 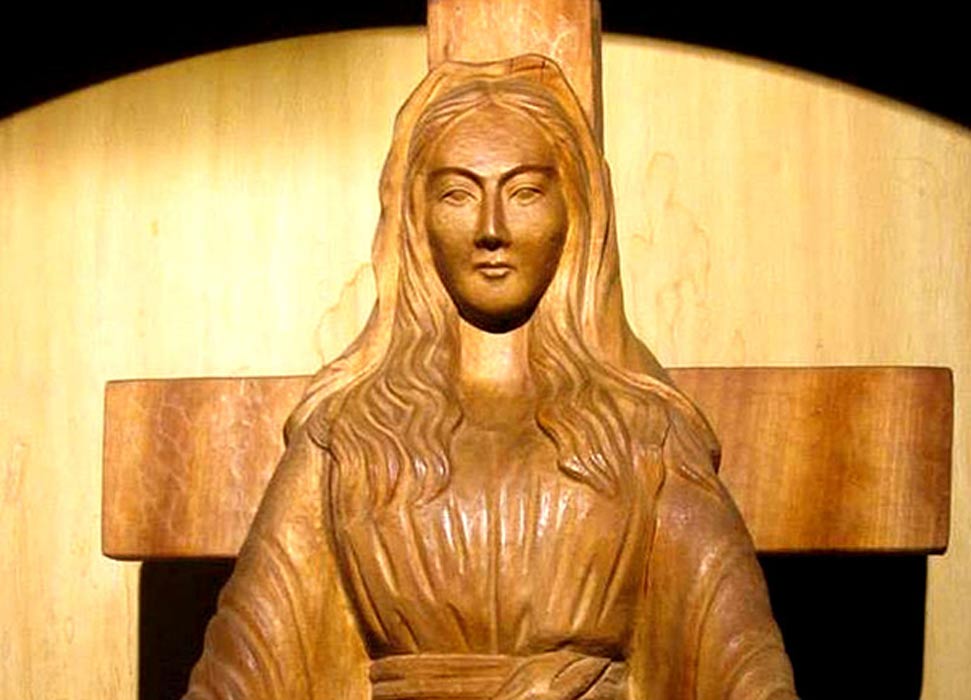 This wooden statue of the virgin Mary carved in the 1960-ies of the Buddhist master. For many years she stood in a small chapel of the convent in Akita, in the North-West of Japan and was no different from many other similar images. And today and herself, and her chapel is known around the world – here come the miraculous and healing.

Since 1973, the statue, carved from a single piece of wood, crying and bleeding. Eyewitnesses claim that she healed a deaf nun and get rid of the brain tumor one of the attendees. Experts can’t explain the nature of this phenomenon. The leaders of the Catholic world has recognized the miracles of the virgin of Akita, though with some fluctuations.
The miracle of sister Agnes

42-year-old Agnes sasagawa Katsuko, came to the monastery of Akita in may 1973. At the time, she had just converted to Catholicism from Buddhism. She had many health problems, exacerbated by an unsuccessful operation for appendicitis. For several years she was completely deaf in his left ear, and the ability to hear from my right ear to plummet.

A few months before leaving the monastery, she lost her hearing, which was recorded in her medical records. Agnes received the official status of the hearing impaired. Her condition was confirmed by two experts from different medical institutions.

The first miracle of the virgin of Akita, she saw after a few weeks of stay in the monastery. June 12, 1973, the chapel seemed enveloped in a bright light, and before the altar, in the air came something resembling a clot of smoke or cloud. Then Agnes saw “the multitude of beings similar to angels. They stood around the altar.”

In addition, Agnes saw how she claims to be his guardian angel, who describes: “a round face expressing infinite goodness… his figure was enveloped in a shining, snow white.” Angel prayed with sister Agnes and gave her his instructions. Agnes spoke about the vision of the abbess of the monastery and its spiritual shepherd.”
Sister felt pain on Thursday night, it continued through Friday and at some point it became almost not portable

Since 28 June 1973, sister Agnes began to receive the stigmata (bruises or sores on the body in those places where, according to the gospel, the crucified Christ were the wounds of the crown of thorns and nails). On the palm of the left hand appeared a small wound in the shape of a cross and began to bleed. Sister felt pain on Thursday night, it continued through Friday and at some point it became almost not portable. Then again she was an angel and comforted her with the words “the Wounds of the virgin Mary was much deeper and the suffering is much stronger than yours. Let us pray together in the chapel”.

After the prayer, sister Agnes looked up at the image of the virgin Mary – a statue of a height slightly less than a meter, cut from a single piece of solid wood barandika, without any joints or cracks.

“Suddenly I felt like a wooden statue came to life and now talks to me,” says sister Agnes. – She was enveloped in a very bright light… and in that moment my deaf ears heard indescribably beautiful voice… [the maid said] “Your deafness will be healed.”

The next morning the nuns went into the chapel for prayer and gasped from the right wrist of the virgin Mary statue was bleeding heavily. Since then, all of July, every Friday, the wound on the statue again and again have started bleeding in the eyes of many visitors.

“It seemed that the blood flows from the cut this flesh,” says another nun from the same monastery. – on the verge of the cross manifested fragments of human flesh, which you could see even the particles of the skin – something like fingerprints. In that moment, I had no doubt that the wound is real.”

In late July of wounds sister Agnes disappeared. Wounds on the statue of the virgin Mary remained until September 29, although no longer bleeding.

By 1982, the hearing sister Agnes has recovered fully, despite the fact that the doctors believed her illness was incurable.

In 1981, a woman from South Korea named Teresa Chun sun Ho saw the virgin of Akita, while in a coma. From Jung was a brain tumor and doctors did not hope for recovery. Coming out of the coma, Chung traveled to Japan and prayed in the same chapel. When she returned to South Korea, the doctors were shocked – Chun was completely healed.

In addition to bleeding of the palms, a statue of the virgin of Akita a few times crying, he filmed on camera the journalists of local news. All in all, the statue was crying, bleeding or myrrh for 101 times. 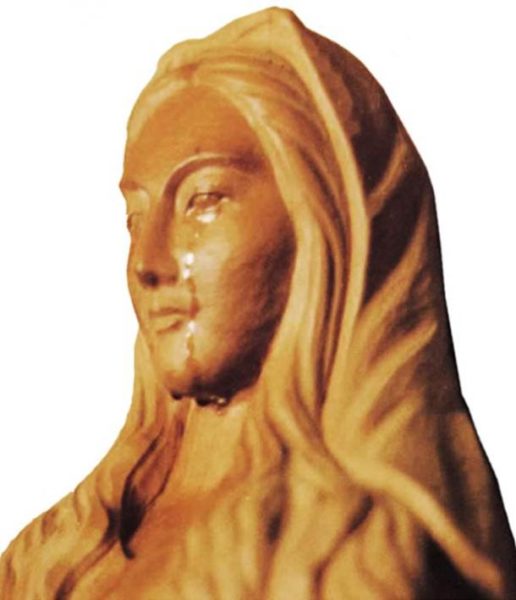 Besides, specialists of non-Catholics studied fluid ooze out of the statue and came to the conclusion that these liquids, the human.