Meeting with the Flatwood Monster 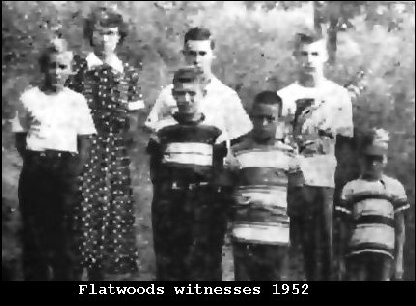 The Flatwood monster, also known as the Braxton County monster or the Flatwood ghost, is an unknown creature, perhaps a criptide or an alien who allegedly was seen in Flatwoods, Braxton County, West Virginia, USA, on September 12, 1952.

It all began on the afternoon of September 12, 1952, when the office of sheriff Robert Carr and his deputy Barnell Long received a call from witnesses of a strange phenomenon. Eyewitnesses claimed that they saw a fiery object flying in the sky, which then fell to the ground in the area of ​​the Elk River. Having received the message, the sheriff concluded that the plane had fallen (it was later found out that no aircraft in this place had fallen).

However, late in the evening received another strange message, this time from a group of children who played football in the school yard. The children saw a falling object, which disappeared behind the hill on the lands belonging to the farmer Bailey Fisher. They decided to go in search of the object. On the way, they went into the house to Kathleen May and she joined the group along with her two sons.

When they reached the hill, Kathleen May noted that in the evening mist there was a strong smell of metal and this smelled of eyes and noses. Ahead of a group of people, a dog ran, but suddenly she returned with a frightened look and her tail between her legs. At the top of the hill, people saw less than a hundred meters ahead of a glowing and hissing object about three meters in diameter. Then the people came closer, it was night and the group saw two small lights next to each other.

One of the boys had a flashlight and when he turned it towards the lights to get a better look at them, the light was snatched away by a very large creature three meters high with a bright red face, bright green clothes, and a head that looked like a card the symbol of the ace of spades, his clothes hung to the bottom and was in large folds. ” 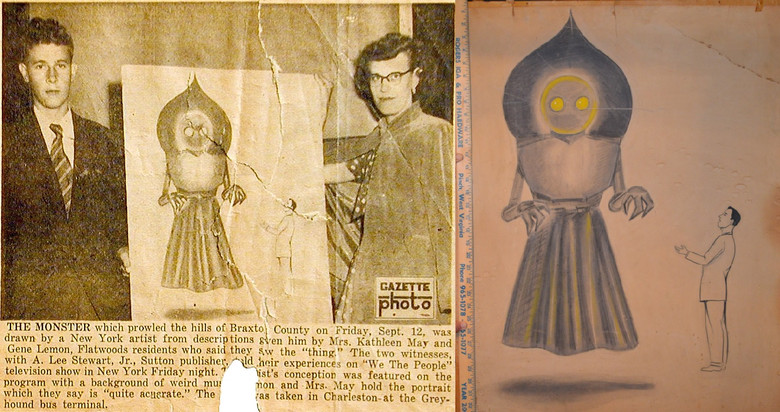 Suddenly, the creature swam through the air straight in the direction of a group of people, forcing them to flee in a panic from the hill down. They ran to the house and that’s when they called the sheriff’s office. By the time when the sheriff and his people arrived at the place of the call, there were already a lot of local residents who were called by the children. Along with the sheriff also came the reporter A. Lee Stewart from the newspaper “Braxton Democrat”, who began interviewing witnesses about the incident. Later he noted that everyone who saw the creature was very frightened.

Stewart also visited the hill, accompanied by one of the sons of Catherine May and himself noted a strange unpleasant smell. But he did not notice anything unusual there. However, when Stewart returned to the hill the next morning, he saw mysterious tracks.

According to sheriff Karr, eyewitnesses watched the meteorite fall, and on the hill everyone saw just some animal whose eyes shone in the dark and could scare everyone. This seemingly plausible explanation does not explain many details in the testimony of eyewitnesses.

And the next night brought even more mysterious. A local resident whose house is by the river Birch River, said that he saw a bright orange object that circled in the sky above the town of Flatfood. And another local resident and her mother claimed to have seen a huge creature about 11 miles from the hill where the first eyewitnesses saw him. 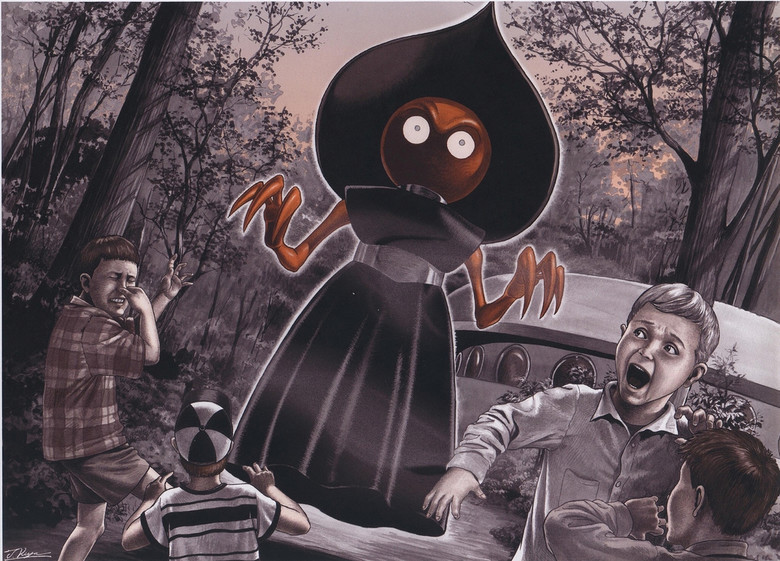 After meeting with the creature on September 12, several members of the group reported that they had symptoms similar to those that had existed for some time during their time in the fog emitted by the creature. Symptoms included nasal irritation and throat edema. 17-year-old Eugene Lemon suffered from vomiting and seizures throughout the night, and he had trouble with the throat for several weeks after that. 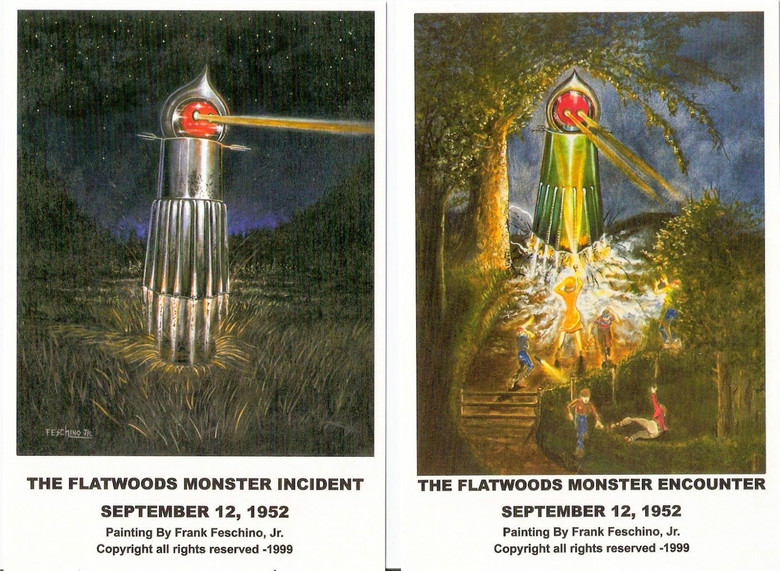 A doctor who treated several witnesses reportedly described their symptoms as similar to those of mustard gas, although such symptoms are also common in those suffering from hysteria that may be caused by the impact of a traumatic or shocking event.

After reviewing the case 48 years after the events of Joe Nickel, a member of the CSI investigative team, then known as CSICOP, skeptical about paranormal phenomena, concluded in 2000 that the bright light in the sky reported by witnesses on September 12 was likely to have been a meteorite, a pulsating red light, most likely came from an airplane or a lighthouse, and the creature described by the witnesses reminded him of an owl.

Nickel argues that the last two circumstances were distorted due to the state of heightened anxiety felt by the witnesses after they noticed the first. Nickel’s conclusions are shared by a number of other researchers, including the Air Force. 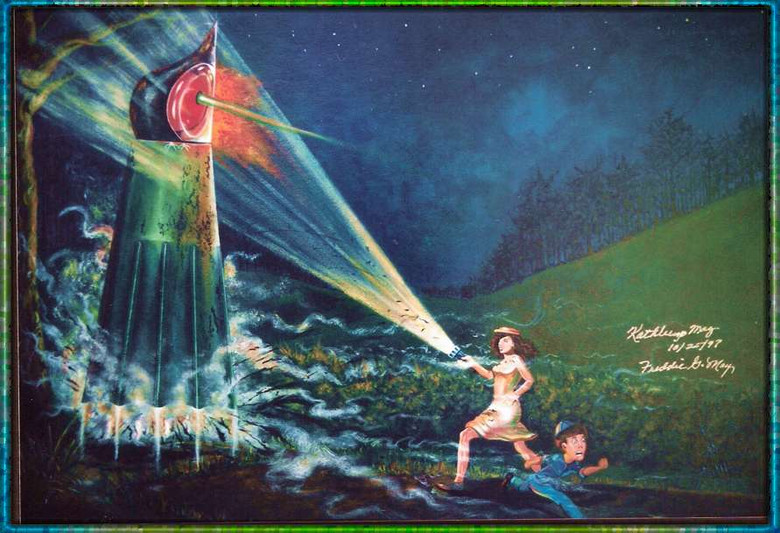 On the night of September 12 a meteorite was observed in three states, Maryland, Pennsylvania and West Virginia, and there was an erroneous report that a flaming plane crashed into a hillside in Elk River, about 11 miles (18 km) to the southwest from the alleged place of observation of the being. From the field of observation, three flashing red lights of the aircraft were also seen, perhaps their pulsating red light was seen by witnesses and mistaken for the red color on the face of the creature.

Nickel came to the conclusion that the shape, movements and sounds of the creature reported by the witnesses also correspond to the silhouette, the flight pattern and the sounds of the barn owl sitting on the tree branch, which led the researcher to the conclusion that the foliage under the owl may have created the illusion of the lower part a creature (described as a pleated green skirt).

The researchers also concluded that the lack of agreement among the witnesses on whether the creature had a weapon, combined with Kathleen May’s story about having “small, tenacious hands” that “were stretched out in front of him,” also corresponds to the description barn owls with claws clutching the branch of the tree.

Alternative explanations put forward by local media include the version that on September 12 the group witnessed the fall of the meteorite, which resulted in a cloud of steam in the form of a man, and also that they allegedly saw some kind of secret government aircraft.

But even after decades, the mystery remains. Nowadays, every year in Flatwoods in West Virginia, a festival is held in honor of the “Green Monster”, lasting from Friday to mid-Sunday, where live music is played, a monster museum is opened and excursions are conducted to the place of its alleged observation.