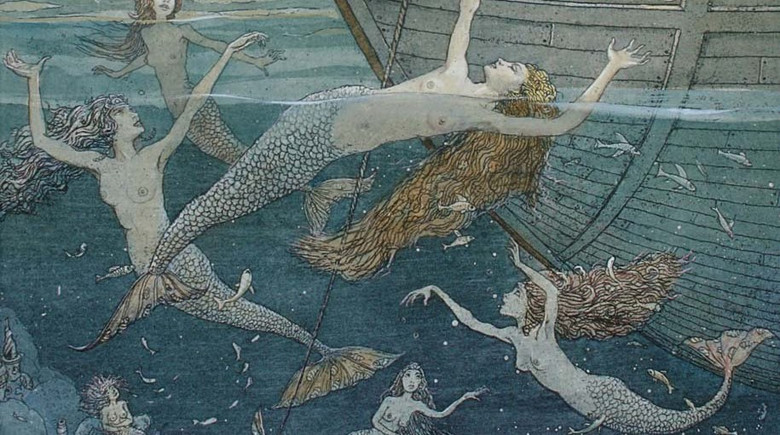 Mythical creatures, whose upper body is like a woman, and the lower part with a fish tail, are called mermaids in Slavs, and in other nations sirens, undines and other names.

According to one version, the word “mermaid” from the Slavs came from the word “fair-haired,” which meant “pure,” “light.” But in the Old English language, this word had a very definite meaning “sea girl” (mermaid).

In Greek mythology mermaid analogs were the spirits of rivers and streams – naiads. Okeanids were the spirits of salt water, and the Nereids – living exclusively in the Mediterranean Sea. Another name – sirens, was applied to the mermaids, who lured the sailors with their sweet-sounding singing and killed them.

The South American Indians called their mermaids iriami. And not only that they themselves were afraid of them to death, but even the Europeans who came to them could convince them of their existence. Serious people who believed in the Christian Trinity, and not into all evil spirits, sent letters to the historical homeland with frightening stories about how another beauty with long hair and a fish’s tail bewitched and destroyed the vessel with all the fishermen.

The mermaids and Serbs, who called them pitchfork, knew. Here scaly beauties also preferred to play love. At the same time, feeling full-fledged mistresses of all water bodies – from forest lakes to village wells – forks were very angry when one of the mortals decided to drink water from them.

Go to land in the image of a lovely girl, go under the crown and even give birth to a child – the Serbian mermaids could quite agree to this. But a glass of water to give the traveler – no way! They could also send blindness to the unfortunate man, and punish the rain with hail. 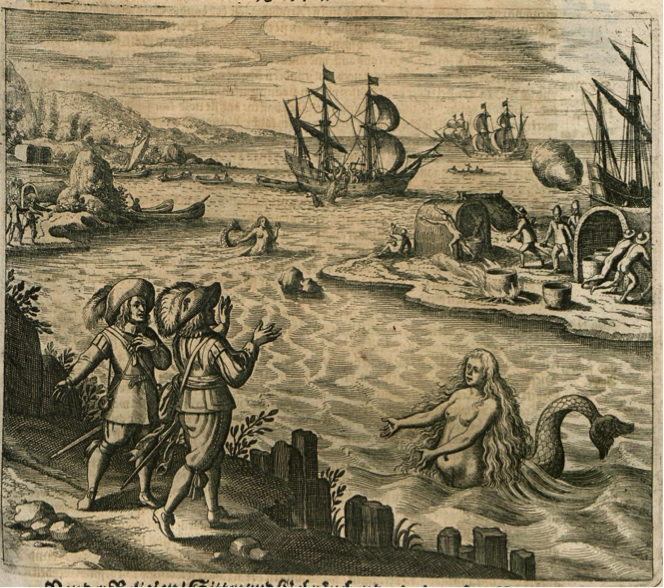 About water women in Ireland – merrow – responded as incomparable beauties. If, of course, close your eyes to the fish tail instead of the legs and the membrane between your fingers. But it is better to stay away from them: after all, the appearance of a merrow on the water surface portends a terrible storm. And if the Irish mermaid falls in love with an earthly man, then he begins to wonder at all not in the way of a mermaid: he will come ashore in the guise of a small horse in a red cap with feathers and will wait for his partner to reciprocate.

Their water virgins under the name of the undines were always admired by the Baltic nations (except Lithuanians), and also by the Germans: the local charmers had blue eyes, curls of gold, and an angelic voice. How not to fall in love with such a water bride!

As a result, many amorous Latvian guys went missing after the first date with the undine. As for Lithuania, the local inhabitants called their tailed virgins. But the essence of this has not changed: just as naiads or undians, on bright clear nights we went out of the water, sang, arranged dances, to lure at least some guy – even one at all.

It should be noted that mention of the existence of mermaids can be found not only in folk legends, but even in the writings of ancient respected authors. Thus, the Roman scholar Pliny the Elder wrote: “… and sometimes their dead bodies were found on the shore …”, while emphasizing that this is not about idle fancies, but about real facts.

Sailors and travelers talked about meetings with mermaids from century to century. Thus, in the book “The Miracles of nature, or the Collection of extraordinary and notes of worthy phenomena and adventures …” it is said that in Holland “in 1403, after a terrible storm that broke the West Friesland dam, they found a mermaid entangled In algae. They brought it to Harlem, dressed them, taught them to knit stockings and bow before the crucifixion. ”

She lived among people for several years, never learned to speak, and when she was dead, she was buried according to Christian custom.

But the record from the ship magazine Henry Hudson, who walked off the coast of the New World: “This morning one of my team, looking over the side, saw a mermaid. He began to call the other sailors. The mermaid, meanwhile, swam to the ship very close and looked at him attentively. A little later the wave overturned it. When she dived, everyone saw her tail, resembling the tail of a brown dolphin, dotted with spots, like a mackerel. Date: June 15, 1608 ». 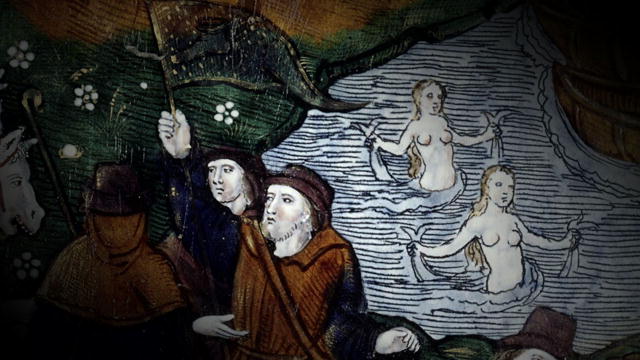 There is also credibility in the book of memoirs of the captain of the English fleet, Richard Whitburn: “I can not but say a few words about the strange creature that I met for the first time in 1610. Early in the morning, when I was standing on the river side of St. John’s harbor in Newfoundland, the amazing creature swam up to me very quickly. He had a woman’s face, eyes, nose, mouth, chin were proportional and very beautiful. ”

As for the last centuries, the descriptions and evidence of meetings with mermaids have diminished. One of the possible causes is contamination of rivers and seas, which contributes to the extinction of the amazing creatures of nature. In addition, the speed of water vehicles has increased many times: in the era of sailboats, seafarers had much more time and opportunity to consider water inhabitants. And yet here are the stories noted already in the new times.

On a warm summer day in 1890, teacher William Monroe was walking along the beach in the Scottish county of Caithness. Suddenly, on a stone that protruded from the sea, he noticed a creature resembling a sitting naked woman. But this did not seem strange to the teacher. The lower part of the body was under water, and Monroe saw clearly the naked arms combing long, shining brown hair. A few minutes later the creature slipped from the rock into the sea and disappeared from view. After much hesitation and doubt, Monroe sent a note to the London Times.

In the letter he very carefully and briefly described an unusual creature: “The head was covered with chestnut-colored hair, slightly darker on the vertex, the forehead bulging, the face plump, the cheeks ruddy, the eyes blue, mouth and lips of natural form, similar to human. I could not see the teeth because my mouth was closed, my chest and stomach, my hands and fingers are the same size as the adult representative of the human race. ”

Monroe wrote that, while other credible people claimed to have seen this creature, he did not believe them until he saw it with their own eyes. And when he saw, he became convinced that it was a mermaid. The teacher expressed the hope that his letter could help to confirm “the existence of a phenomenon that until now is hardly known to naturalists, or to reduce the skepticism of those who are always ready to challenge anything that is incapable of comprehending.” From this quite logical letter it follows that the sea maiden was believed not only by sailors who went crazy with boredom and abstinence in long ocean voyages.

More recent history tells that on January 3, 1957, the traveler Eric de Bishop sailed on the model of the ancient Polynesian raft from Tahiti reconstructed in Chile. Suddenly the watchman on the raft behaved very strangely: he shouted that he saw an incomprehensible creature jumping out of the water onto a raft.

Balancing on the tail, this creature with hair, like the finest algae, stood right in front of him. Touching the uninvited guest, the sailor received such a blow that he sprawled on the deck, and the creature disappeared in the waves. As the glittering fish scales remained on the hands of the sailor, de Bishop did not doubt the veracity of what had happened.

Women-amphibians have often met in the Caspian. Their appearance in the human habitation zone is explained by intensive oil production, geophysical explosions in the search for new deposits, that is, a violation of the ecosystem of habitual habitats. In March 2007, the sailors of the fishing trawler “Baki” also presented a photo of this mysterious creature.

Answering the journalists’ questions, Captain Gafar Hasanov said that “it swam for a long time not far from us, going along a parallel course. At first we thought it was a big fish. But then they noticed that the head of the monster clearly shows the hair, and the front fins are not fins at all, but … hands! ”

There is a touching and sad history dating back to the 6th century, about a mermaid who visited the monk daily from the holy brotherhood of Jonah on a small island near Scotland. She prayed for the soul, and the monk prayed with her to give her the strength to leave the water element. But everything was in vain, and in the end, bitterly weeping, she left the island forever. It is said that the tears she shed turned into shingles, and until now gray-green stones on the coast of Jonah are called tears of a mermaid.

For quite some time these sea maidens were associated with seals – with their smooth skin and behavior resembling the human. In Scandinavia, Scotland and Ireland, there are many legends about villages (silks) – people forced to live in the sea in the guise of a seal and only occasionally, on the shore, turning into a human being.

Here and there it was thought that the seals are fallen angels, somewhere they were considered the souls of drowned people or victims of an imposed spell. Moreover, in Ireland there was a belief that the ancestors of people were seals. 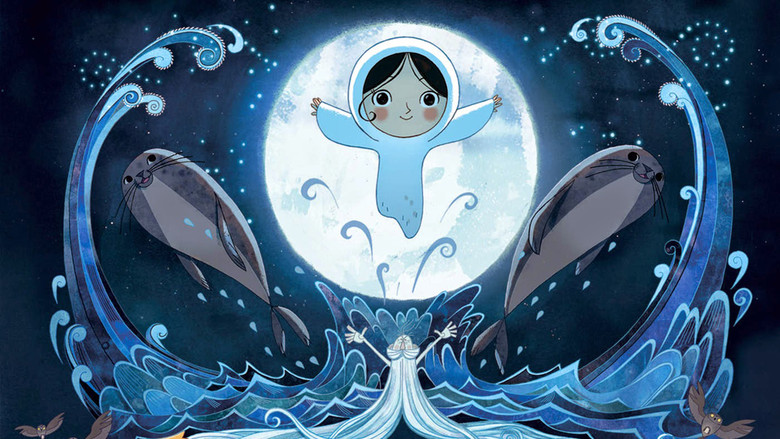 In some areas, legends about mermaids have a long history. In 1895, the inhabitants of the Welsh port of Milford Harbor still believed that mermaids, or sea fairies, regularly visited the city’s weekly fair. They get to the city by the underwater road, quickly buy everything they need (tortoiseshell hair combs and the like) and disappear until the next day of the fair.

About mermaids wrote and in Thailand, and in Scotland. There, in May 1658, mermaids were seen at the mouth of the river Dee, and the Aberdeen almanac promised travelers that they “would necessarily see a lovely flock of mermaids, amazingly beautiful creatures.”

As rumors about mermaids multiplied, fakes inevitable in such cases began to appear. Usually they were made by connecting the upper part of the monkey with the tail of a large fish. One of them, possibly made in the XVII century, was shown at an exhibition of fakes, carried out by the British Museum in London in 1961. 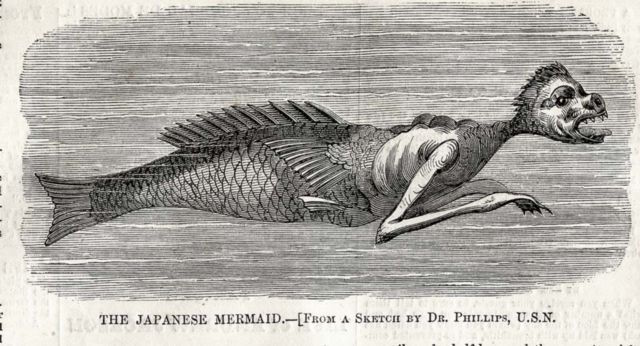 Naybolev popular stories about mermaids spread among the sailors. Previously skeptical Christopher Columbus noted during his first trip that he saw three frolicking mermaids in the sea away from the outlying Guiana.

Most of these so-called mermaids were unusually ugly, but they evoked constant interest. In one edition of 1717 there is an image of a supposedly genuine mermaid. Signed: “A monster similar to a monster, caught on the coast of Borneo, in the administrative district of Amboyne. At a length of 1.5 meters, a physique looks like an eel. He lived on land for 4 days and 7 hours in a barrel of water. Periodically, the sounds resembling a mouse squeak. The proposed mollusks, crabs and sea crayfish are gone … ” 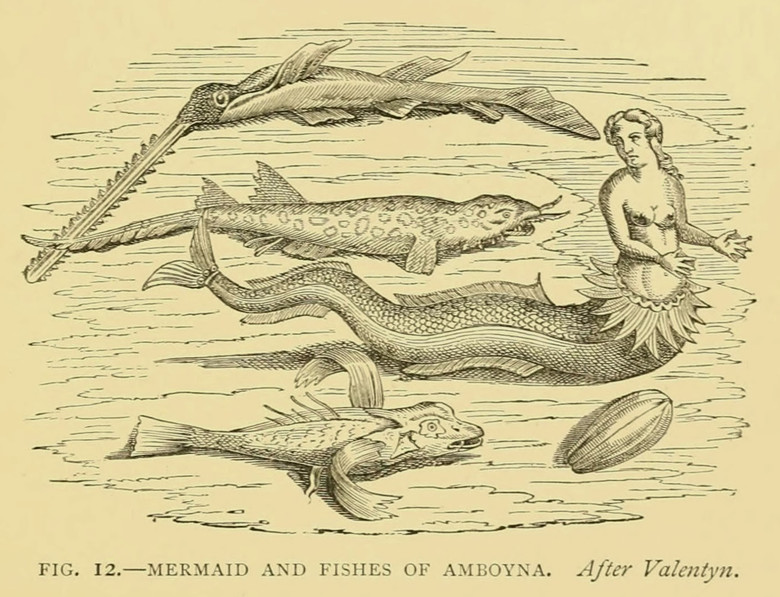 At one time, Peter I was interested in mermaids. He turned to the Danish colonial priest Francois Valentine, who wrote on this subject. The latter could add a little, but nevertheless described another mermaid from Amboyna. She was seen by more than 50 witnesses when she frolicked along with a bunch of dolphins. The priest was absolutely convinced of the veracity of these stories.