Memories of past lives under hypnosis 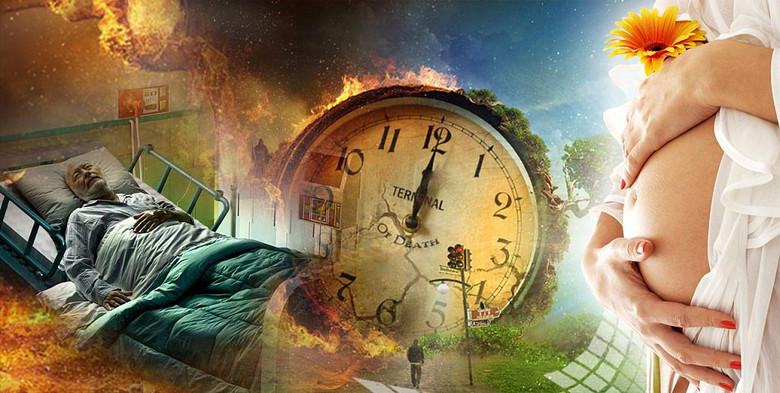 Hypnosis is a very powerful tool, and we can not pretend that we are all aware of its effects or capabilities. He has a somewhat gloomy reputation in official psychological circles – behind him is a train of fame. And, it must be admitted, the touring hypnotists contribute a lot to this, which are engaged in show business rather than therapy.

But many therapists continue, very circumspectly, to use hypnosis as a tool to gain access to the deep layers of buried memory. And just during the hypnosis sessions used for such purposes, some psychotherapists observed very strange phenomena.

From the depths of the subconscious of the patients reminiscences appeared that had no obvious roots in their life; It was like the memory of a past life.

American psychotherapist Dr. Edith Fiore described how she first encountered similar reminiscences from a past life by the example of one of her patients.

“He turned to me,” she wrote, “in connection with the painful psychological clamps in the sexual sphere. When I asked him, while he was under hypnosis, to return to the origins of his problems, he said: “Two or three lives ago I was a Catholic priest.”

This was for her a complete surprise. But professionalism began to speak in her, and she helped him to reconstruct the picture of what he described as the life of a priest in seventeenth-century Italy. At the next meeting, the patient reported that he was free of his problems.

Of course, she was not the first to discover that hypnosis has a clear ability to awaken the memory of past existences. The first significant case intrigued by the public was the sensational Bride Murphy sensational case in the United States in the 1950s, which dealt with the pre-existence of the nineteenth century in Ireland.

Brydi Murphy is the name of a woman from the Irish city of Cork, who lived in the 19th century, who allegedly started talking through Virginia Tai, who was in a state of hypnosis. This happened in the city of Pueblo, Colorado, in 1952, when a local businessman and hypnotist amateur Moray Bernstein managed to cause Virginia to regress to a past life.

Bernstein held sessions with Tai many times. And she, being hypnotized, sang Irish songs and told the Irish stories in the provincial dialect, while always calling herself the name of Bryde Murphy. 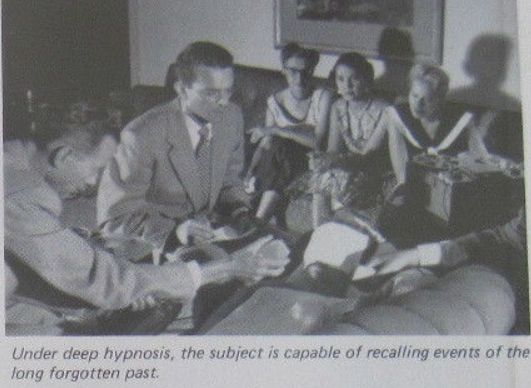 In England, a similar flurry of support and criticism was triggered by the hypnotist Arnal Bloxham, whose patients, recalling their past lives, gained notable fame when the BBC television channel filmed a documentary about them.

Undoubtedly, such cases are fascinating, the subjects report a lot of very bizarre and intimate details about their previous lives. It is also true that they have become the subject of close scrutiny and criticism.

Perhaps Bloxham’s most famous patient was a man who, under hypnosis, recalled how in the eighteenth century he served as a gunner on a British frigate with thirty-two guns on board under the command of Captain Pierce.

The ship, apparently, wore a florid and difficult-to-pronounce name; Sailors, according to the patient, nicknamed him “Aggie.” He could not remember his real name. Perhaps the sailor of those days could not read or pronounce it. Perhaps this nickname was a shortened version from Agamemnon or something like that.

During his memoirs, he used a large number of old-fashioned phrases and special marine terms, familiar only to sailors of that era. He brought a lot of details from the lives of sailors in those days: a stench, worm-infested food, canvas clothing and flogging – which, he said, he escaped, as he could “stack a cannon.”

His first – and only – hypnosis session culminated in the dramatic events of the sea battle. He described, with passion and vivid details, a battle with a French ship near the port of Calais. They waited for many hours near the shore, hiding in the morning mist.

All the guns were ready, the fuses were inserted. The gunmen waved smoldering pieces of tar-impregnated cord to prevent them from extinguishing, at any moment, ready to bring the wick. The ship shuttled back and forth in anticipation of the appearance of a French ship. When he finally appeared, the English gunners were ready to fight.

He described this fight. The ships began to approach each other. Less experienced Gunners were impatient, eager to open fire. He continued his story:

“Stop, stop! Wait for the order – calmly, guys, calmly – quietly, not yet time – wait for the order, without the order it is impossible – swing the wick, is, sir – do not stand at the tail – now come on. Now let’s go – fry! – (cries of exultation at the beginning of the firing). Well done, guys – ask them the heat, ask them how to do it – hammer them in the front – (exhausting screams) – drag it away, drag it away – carry it to the cockpit – but carry it – and now ask them the heat – ask them by the first number !. .

Charge the core – the ramrod – hammer it, slaughter it, fool, first hammer it – charge, load the core – live, number four, do not lag – charge, scramble properly – insert fuses – swing the wick – there is, so be sure, sir – get ready! ..

The patient woke up so shocked that he never again subjected himself to hypnosis.

This story was so extraordinary and so convincing that Prince Philip and Earl Mountbatten, both serving in the Royal Navy, demanded tape recordings of this, very similar to memories of a past life, narrative.

They asked the historians of the British Admiralty to establish a ship, a captain and a battle. Unfortunately, despite all the abundance of details, they could not do it. So this is not a genuine case of reminiscences about the past existence? Just a fantasy, colored with fragments of books, movies and radio programs?

The verdict is still not passed.

Is it worth to believe the memories under hypnosis?

Nobody denies that hypnosis is a useful therapeutic tool, but are hypnosis statements about past existences of objective reality consistent? Dr. Fiore, for example, does not attempt to confirm the historical authenticity of what her patients tell. She is interested in psychological, not historical truth.

She is only interested in what will help heal the patient. If the patient’s psychological disorders are cured or alleviated by understanding the causes of the problem in terms of reincarnation, then this alone is enough to take her seriously. This approach strongly resembles the search for the Dalai Lama; All this is fascinating, attractive and acts irresistibly – but hardly scientifically. 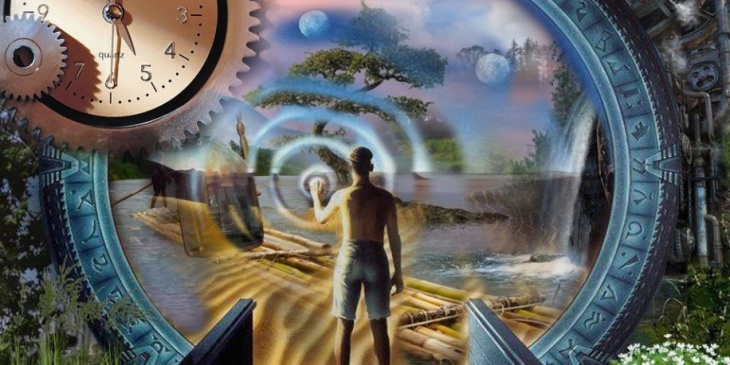 Psychiatrist Ian Stephenson has long been aware of this difficulty. In his own studies on the question of reincarnation, he refrained from using hypnosis. He frankly admitted that his application was attractive; It seems that it enables the creation of laboratory conditions for monitoring and verification.

But, as he explained, this is an illusion. It always turns out to be impossible to control the previous experience of acquaintance of the subject with the details encountered when recalling “past lives” – like novels, plays, feature films or documentaries.

He explained that these seeming past beings appear, apparently, from several sources: they contain fragments of the subject’s own personality along with a fantasy material derived from a variety of sources, whether printed or cinematographic. A considerable influence on them is also due to the fact that it seems to the patient that the hypnotist would like to hear from him. In other words, the patient wants to please a specialist, giving him “correct” information.

Stevenson added that an element of a paranormal quality is also possible here, referring to clairvoyance, telepathy, some kind of out-of-body existence or to the phenomenon of genuine reincarnation. But all these sources can be present simultaneously, together forming such “remembering”. Such a combination would give a coherent and exciting history, but not the one that is entirely the memory of a past life.

And yet we can not completely reject memories – for all their unreliability – caused by hypnosis. Who knows, maybe some genuine memories of past lives attract all the material associated with this, which the mind collects and stores for years.

It is possible that somehow, being in a state of hypnosis, the subject is unable to distinguish the line between these sources and therefore presents all the information available to him, united in a convincing whole.

Death of a Knight

But some of the statements, some of the memories of this kind, have a quiet dignity, a sense of authenticity devoid of a touch of drama. They are not easily rejected and completely written off.

One such example from the file of Dr. Fiore relates to a man who told of his participation in the knight tournament in England in the I486 year – a tournament that for him ended very badly.

Being in a state of hypnosis, the patient described to Dr. Fiore those instants that preceded his entry into the arena in a knightly competition in England, during the reign of King Henry VII.

Describing how he nervously waited for his turn, he eventually started talking about his exit. Suddenly, his body jerked violently. He said that the enemy had just knocked him off the horse. Dr. Fiore asked if he was lying on the ground.

“No, I’m kind of … got up … I’m more ashamed than frightened, but … I’m still swimming before my eyes … I think I have a wound in my stomach.”

His opponent, still on a horse, meanwhile circled, waiting for an opportunity to finish off the mace of the fallen knight. The patient described the difficulties encountered before him: armed only with an ax, he, no matter how hard he tried, could not have caused great damage to the mounted enemy.

Suddenly the knight threw his horse at him. At the same time, he waved his mace, a chain with a nucleus at the end, studded with thorns, inflicting a fatal blow on the head of his dismounted enemy.

The face of the patient Dr. Fiore distorted the grimace of agony. She asked him where he was. In a weak voice, he replied: “I’m lying on the grass … I do not feel anything … just something warm … and red blood … warm blood flows out of my body … and it seems to me that Me as if … I saw a white light and … I kind of like got up into the air … ”

Later he further described his death:

“I lay face down and then began to rise into the air still face down … rising ever higher and … at first as if by three feet … and then began to climb straight up … and just flew … Feeling of warmth in my whole body and complete liberation … I see the whole area below me. I can see everything. “