Memories of past lives 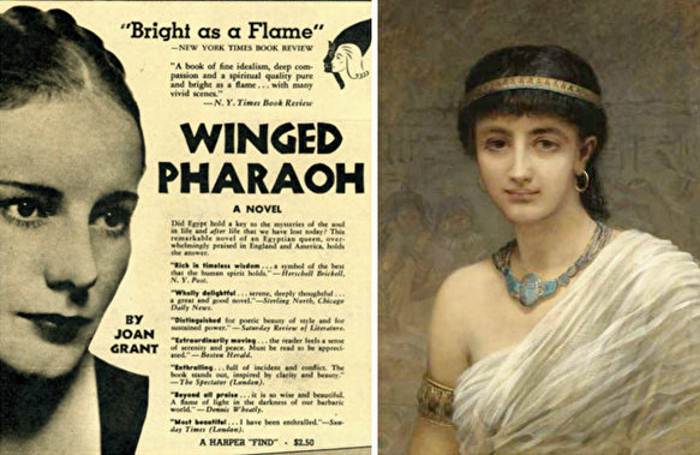 Memories of past lives to help archaeologists? The writer remembered how she was the pharaoh of Ancient Egypt.

Joan Grant (1907-1989) became famous in 1937 after the publication of the book “The Winged Pharaoh”. Through the main character, Secet, Pharaoh’s daughter Grant describes her past life.

Some of the plot lines in the book on Ancient Egypt corresponded to what archaeologists knew, and some facts were confirmed later and became archaeological discoveries.

Of course, since a long-gone civilization is somewhat obscure and distant, it is impossible to prove that Joan Grant really once lived at that time.

Writer Herbert Wells, who believed in the authenticity of the described Grant, once told her: “You need to become a writer.”

Wells suggested that Joan keep her knowledge secret until she becomes “strong enough to endure the ridicule of fools.”

Father Joan JF Marshall was a famous British entomologist, and the mother of the writer Blanche Marshall is a social psychologist.

After more than a hundred sessions of “memories” under hypnosis, Grant determined the plot of each chapter of the “Winged Pharaoh.”

In the 1940s, British writer Jean Overton Fuller (1915-2009) contacted several Egyptologists to conduct research and verify the authenticity of what Grant “recalled”.

After Grant’s death in 1989, Fuller published an article describing the results of the research and the experience with Grant.

Husband Grant Leslie was an archaeologist. According to Fuller, Joan accompanied her husband on the excavations after the couple went to Egypt, and after a year and a half Joan began to remember her long-standing relationship with Egypt.

Grant is the first female monarch?

From the very beginning, Fuller tried to find something among historical personalities known to her descendants, something that corresponded to the description of Grant.

In Ancient Egypt, one person could have several names at the same time. Grant said that her (Seketa) temple name was Merineit. Joan wrote the chapter “The Tomb of Merineute,” in which Sekta observed the construction of her own tomb.

This name is similar to the name of the queen of Ancient Egypt Merneut (also known as Meretneyt), a controversial figure in the circles of Egyptologists.

Merneut lived during the first dynasty of Ancient Egypt, but until now it has not been fully established whether she had real power. If so, then she is the first female pharaoh, and also the first female monarch in history.

Fuller said that the British Egyptologist Walter Emery (1902-1971) was puzzled by Merneyt’s tomb: “Her tomb was so huge and prominent that he felt that she was the regent queen.”

The genealogical tree of the pharaohs of the First Dynasty of Ancient Egypt (about 5 thousand years ago) looks like this:

1. Narmer / Menes / Hor-Ah (Ed .: scientists have not yet established whether these three names belong to different people or to one person)

In Egyptology Merneut was sometimes described as the daughter of Jerus or Jet’s wife, and Fuller suggested that Mernaeut and Jet are the same person.

Grant wrote that the choral name * given to the Sekte was Zat, which in the hieroglyphic script was represented as a snake. Jet also means the word “snake”.

This hieroglyph in the form of a snake was transliterated as Zet, which is close in sound to Zat.

Carol Andrews of the British Museum said: “You will notice that the name of Jet … remains controversial.” A venomous snake on gray **, a poisonous snake in the middle, was usually transliterated as dj or sjt.
In addition to the serpent hieroglyphs, the reason Fuller paid attention to Jet is that the next pharaoh after Jet was Pharaoh Den, the son of the main character in Grant’s book.

Modern Egyptologists suggest that after the death of Jetta, Mernayt became regent under the young son of Dene.

If the “seen” Joan Grant is true, then an unsolved mystery with the names of Narmer, Menes and Khor-Aha is allowed.

In the book Grant explains that before Menes united Upper and Lower Egypt, Narmer ruled the southern part (Upper Egypt) and was a pharaoh in the prehistoric period, was also the first pharaoh of the 1st dynasty. The descendants of Menes were very revered by Narmer.

Khor-Aha and Menes can be the same person, because the Egyptian word “men” means “successful.” It is believed that Menes united Upper and Lower Egypt, becoming the first pharaoh of the dynastic period of Ancient Egypt, which corresponds to a successful cause.

By the rules of the Greek language to the name of Men was added es, so nowadays it is known as “Menes”.

The writer also described the silver items of Sekta’s household. When Grant wrote the book, the fact that at that time the ancient Egyptians used silver was unknown, but later became an archaeological discovery.

In the book Grant wrote about the life of Sekety: “In the sacrificial church I had only a crest and a small bronze mirror, my figure was slightly shining. Now on my crest of elephant teeth was engraved my sign – “winged pharaoh”, the trained falcon sits on the victorious ship, this is the upper part; below is my choral name – Zat, the serpent is embedded, the key of life is depicted nearby, on both sides there are symbols of power.

In the book, Grant described facts that disagree with the assumptions of scientists, for example, the appearance of horses and chariots.

At that time, scientific circles did not recognize that there were horses in ancient Egypt, it was believed that horses were brought from Asia during the Hyksos era (about 1600 BC), which is about 1500 years later than the time when Secet lived .

Nevertheless, Grant insists that the horses were brought in the period of the first dynasty, because the authenticity of some elements of its history has already been confirmed.

According to the book Grant, the horses of the ancient Egyptians were brought by the zuma (the ancient Incas). In academic circles, the opinion that horses were brought to Egypt by 1600 BC. e., was neither confirmed nor disproved.

_________
* One of the five names in the royal title of Ancient Egypt.
** The four coal emblem in Ancient Egypt, which contained the name of the pharaoh.