In the middle of August, on the Greek island of Kefalonia, what happens here is immediately after two miracles: on the feast of the Assumption of the Mother of God, the temple is filled with unusual pilgrims-serpents.

Every year, the believing islands await with excitement the appearance of the serpents of the Virgin, as they believe that their absence promises misfortunes. So far, they have not appeared twice – in August 1940 (before the war) and in August 1953, when the island suffered a devastating earthquake.

The snakes of the Virgin Mary have unusual signs – crosses on the head and tongue. According to legend, when in 1200 the pirates attempted to capture a local women’s monastery, they were met by the snakes, who turned them into flight.

Since then, every year, on these holy days, the serpents of the Virgin descend from the mountains to the icon of the Mother of God, “participating” together with believers in the celebration of this most important Christian holiday.

In the southern part of the island of Kefalonia, near the village of Markopulo, is the Church of the Assumption of the Virgin. Here every year, August 15, something incredible and wonderful happens. Around the temple and inside it, beginning with the feast of the Transfiguration, small (no more than 1 m), thin, gray snakes appear – snakes of the Virgin Mary, as they are called among the people.

To the touch they are elastic, velvety, with sparkling eyes. On the wide head they have a black pattern, similar to a cross. The tip of the tongue also resembles a cross. Every day, closer to the holiday, they are becoming more and more, and on the eve of the holiday in the church and around it from snakes simply there is no passage.

The picture is really incredible. Snakes curled up by a bracelet, on the wrists of believers, others – on the icons of the Mother of God and the Crucifixion, on the paraphernalia. You can see them and the Gospel, which is held by the priest during the holy liturgy. During the evening service, snakes creep freely between the prayers, not frightening anyone, and not being frightened themselves.

The picture is simply idyllic, as in the Garden of Eden, where they peacefully coexisted with other animals. As soon as the day ends, as if by magic, the serpents also disappear. Where they go and where they come from, and to this day remains a mystery. Scientists-naturalists could not establish the sight of these snakes. They do not belong to any of the existing species of reptiles.

People’s tradition says that once on the site of today’s church there was a large monastery of the Holy Virgin, in which nuns lived. The wealth of the monastery was haunted by pirates, robbers and all kinds of invaders who set fire to the monastery during the next attack.

The nuns, surrounded by flames, could no longer resist the attackers. They gathered around the altar and began to ask the Mother of God to save them, turning them into birds or snakes so that they could fly away, or crawl away, leaving their bodies clean and unblemished …

The Holy Virgin helped them, and now, every year, on the day of her feast, the nuns come back here in the form of snakes that are considered sacred. According to another version, the nuns who turned into the serpents, thanks to the Mother of God, scared the Turks with their number of monks who were besieging the monastery, who fled, having removed the siege. Thus, the nuns have been saved and since then every year, from August 6 to 16, come back here to honor the memory of the Holy Virgin. 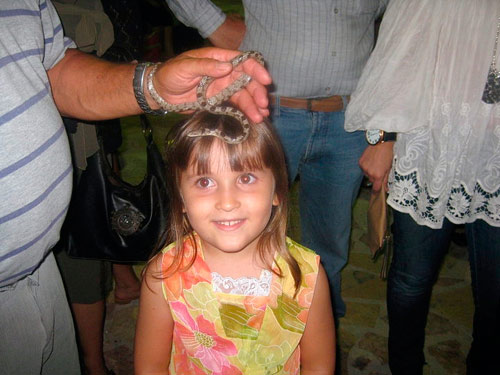 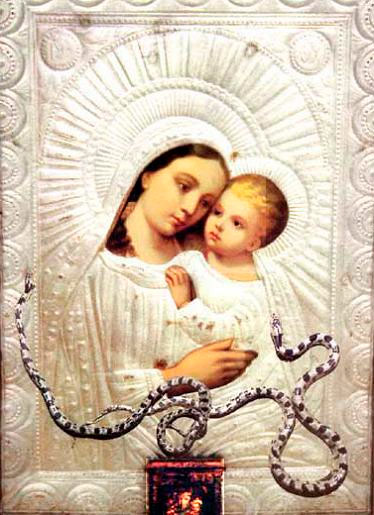 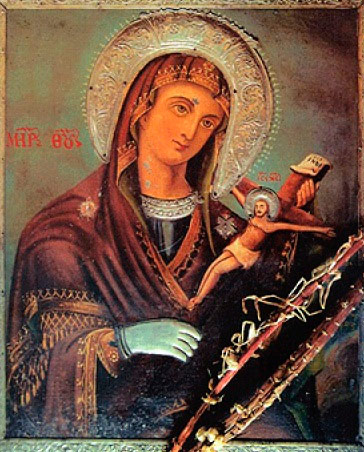 Therefore, the icon of the Mother of God in Markopulo received the name of Our Lady of Fidus (“fidi” – in Greek “snake”). If suddenly they do not appear, which sometimes happens, this is considered a bad omen. So, in 1940, when the snakes did not appear, the war began, and in 1953 an earthquake occurred.

With the name of the Virgin Mary, there is another miracle happening on the island of Kefalonia. Between the villages of Trogoniat and Demuttsadat, near Argostoli, there is a chapel built by pious Christians in honor of the Mother of God and dedicated to it. It is called “Panagia me meta Krinakya” (Mother of God with lilies) because of one very strange, repeating every year phenomenon that occurs here.

It is associated with fragrant white lilies, called on the island “Parthenocrenini” (parthenokrinoi). On the eve of the great feast of the Annunciation, believers put them in vases in front of the icon of the Mother of God. With time (from March to August), flowers, of course, wither and dry up. In August, when another great feast comes – the Dormition of the Mother of God, these dried lilies start to blossom miraculously, although their stems still remain dry. This phenomenon does not apply to the sphere of fantasy, nor to strange phenomena of nature.

In the south-east of the island there is the Pastras village, where the same miracle occurs with white lilies. In spring the women of the village plant their tubers in their front gardens and in the courtyard of the church. When lilies begin to blossom in May, women cut them and put bouquets before the miraculous icon of the Mother of God.

As it should be according to the laws of nature, flowers wilt after some time. By August 1, when services begin in honor of the Mother of God, continuing until August 15, along with the ascension of the Mother of God, dead lilies are also resurrected. In an incomprehensible way they come to life and begin to open new buds.

After the holy liturgy on the day of the Assumption the priest distributes it to the parishioners as the blessing of the Mother of God. It is impossible to explain this phenomenon from a scientific point of view, nor from the usual logic. Otherwise, as a miracle, it can not be called.