Like any other mysterious place on Earth, lake Baikal is definitely associated with UFOs. In General, if you follow the statistics of the appearance of unidentified flying objects in all regions of Russia, like other countries, we will get a definite answer: lake Baikal record are not more of these objects than in any other place where the lives of many people.

But Baikal still a special case. As you know, not only the lake itself is a solid unexplored mystery, but the atmosphere that reigns in these places is quite remarkable. A huge number of shamans and superstitions will convince anyone that the lake is not easy. And if not simple, somewhere nearby must be a UFO, according to UFO. Because all these phenomena are interrelated.

Like it or not, it is impossible to say for sure, but the fact that unidentified objects do occasionally shows up near the lake, over the lake and even in the depth of the lake is obvious. Of course, we can’t exactly say what the evidence is, but they are, and this suggests that something extraordinary can indeed take place.

Among the latter, “space attack” is the first half of 2006. Then in the area of Bolshiye Koty could often see many fireballs that randomly floated in the sky. In size they were no more football, so many thought it was some form of life, not the aircraft.

In early 2007, a UFO nerves of the residents of Irkutsk, near lake Baikal. A very long time hung in the sky, and was seen by very many people. However, skeptics say that it was Venus. By the way, this celestial body is easily mistaken for a UFO, because in some of its phases it can be very large and easily visible to the eye.

In Irkutsk before that, there was a funny incident, when, seeing Venus, the crew of one aircraft simply refused to fly. If the pilots can make mistakes, what to say about ordinary people? Of course, if it really was Venus…

Similar cases in the densely populated Irkutsk frequent. It can be assumed that they are connected with the lake. But what the aliens or some other beings might need in the lake?

I personally disagree, but ufologists believe that the lake could become a base for alien ships. No other place on Earth so often is not positioned as alien the alien base as Antarctica and lake Baikal.

With the Antarctic, everything is clear: she is inaccessible to man, and there can be easy to hide. But what is it Baikal when there are huge expanses of deeper oceans, which can be much better to hide than in plain sight almost in the center of Eurasia?

However, a lot of places in Europe and Asia, which could have such great depth, as in lake Baikal? They are not. If a hypothetical alien was the question of the distance to human civilization and the perfect hiding place, they certainly would have stopped at the lake. It all looks quite plausible, if aliens were on our planet, what we can’t know.

It is interesting to note, but in favor of the probable placement of some bases in the waters of the lake speak amazing testimonies and incidents about which we cannot be silent. Let’s start with the fact that scientists still can not give absolute guarantees regarding the depths of the lake.

As mentioned in the article, “Mysteries of lake Baikal: Taganskoe earthquake and the Siberian ocean”, it can be more for miles. If so, just unknown space could be successfully used for the construction of a completely invisible underwater inhabited colony.

There is some evidence, like water sometimes you can see a huge spotlight and other strange lights. So, in 1977 a group of tourists had been seen a strange streak of light in the water. When they sailed on a boat, the band disappeared, but there was a glowing circle, which gradually disappeared.

It is difficult to assess the reliability of such evidence, but they are very regular. Very often people watching under water flash lights, of course, fly balls and even already familiar to our minds disc-shaped object.

Another questionable incident occurred in 1982, when during a training exercise military divers met at lake of strange humanoid creatures growing up to 3 meters, which moved under water without an aqualung, but with some spherical helmets. Not subject to verification sources claim that the military is urgently trying to delay even unknown creatures.

It all happened at a depth of about 50 meters, which requires special attention of the diver because it’s a dangerous depth, from which there is no quick exit. Military divers threw one of the creatures of the network, but something they have sharply pulled back up, and the whole group was struck by decompression sickness. Say, some of them even died.

Believe it or not — you decide. But it is very difficult to imagine an event of this order in 1982 could not be kept secret for 100 years, especially that it happened with people under oath.

The bends — decompression disease, characterized by the boiling of nitrogen in the blood and tissues of the body, which passes into the gaseous state. Occurs when rapid ascent from great depths, with decompression of aircraft at altitude over 8 km, etc. is Very difficult to treat in severe cases the person dies or remains disabled for life, not able to move and experiencing severe pain when trying to do it.

Also there is a hypothesis that the lake may have formed an unknown intelligent life form. This assumption could explain the case with the strange humanoid creatures in 1982. Could in the lake to form a developed civilization?

If you say that in the lake lives a hitherto unknown creature, then the road is open. But to this creature quietly lived there and developed rapidly to present as something quite difficult. It’s probably impossible.

However, one should not exclude that it’s not the most fantastic theory, but simple defense secret. Since I did not find any clue, try to present their own arguments and known facts in favor of the possible presence in the coastal cliffs of lake Baikal secret military base.

Known military theorists of all countries always dreamed of as possible hidden from the eyes of enemy military bases. Where they were built and that they just did. On the territory of the former USSR there are hundreds of underground facilities. Literally the whole city was built somewhere in the rock or soil layer, and none of the locals did not even know. Some of these objects still exist.

They can place bomb shelters, secret plants, missile silos, research institutes, threat trade and many more. All of this suggests that the military could be tempted to use for their own purposes and Baikal. In General, they did, but to what extent, we can not know and therefore will not exclude the possibility of the existence of a relatively large and still a functioning base.

First, consider the arguments “for”. Precedents for constructing such bases, and the objects had impressive scale. Recall the story of the Balaclava — a huge military base for submarines, developed in the rocks of the Crimea.

This refers to the object 825 GTS (or K-825, sometimes called a “cold war Museum”) — an underground submarine base in Balaklava, a secret military object during the cold war, located in Balaklava Bay. 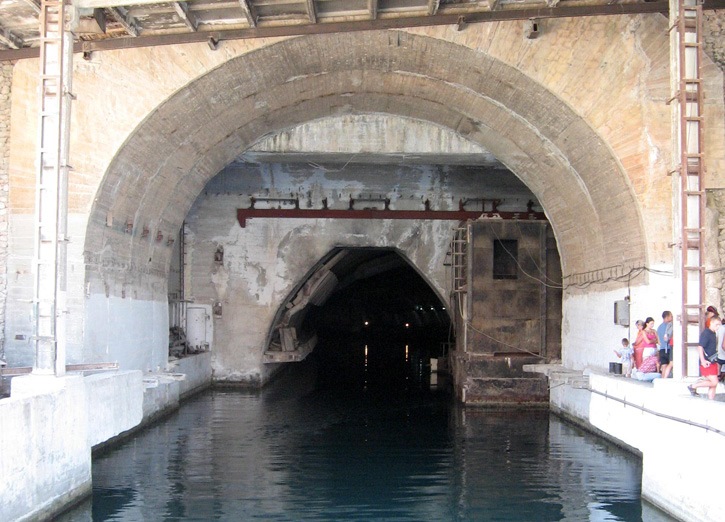 Balaklava, the entrance to the base. Photo from 2007

Object 825 GTS was designed to shelter, repair and maintenance of submarines, and for ammunition storage. The depth of the channel reaches 8 m, the width ranges from 12 to 22 m. the Total area of all premises and moves the factory to 9600 m2 area of the underground water surface is equal to 5200 m2.

The underground complex was built 8 years — from 1953 to 1961. During construction it was taken about 120 thousand tons of rock. To ensure the secrecy of the export was carried out at night on barges to the open sea. Built the object first military, and then the builders because of the complexity of rock drilling.

After closing in 1993, most of the structure was not guarded. In 2000, the facility was transferred to the Naval forces of Armed Forces of Ukraine. In the period from 1993 to 2003, the former base was actually looted, dismantled all structures containing non-ferrous metals. In 2014, the facility came under the jurisdiction of Russia and became the southern area of the Military historical Museum of the fortifications of the Russian Federation.

If that was the idea, why not be the idea similar multifunctional base in the rocks in the Baikal?

If this were so, it would be clear, where are the underwater lights, and why some areas of coastline are under strict protection under the pretext of protection of the reserve.

Skeptics could argue that such a database could be built in any other place, but not in such noticeable. However, it is impossible to accept. If Baikal is a unique place literally from any point of view, why wouldn’t he be for some reason unique and for the military? Maybe they have a factory there, which needs large supplies of clean water or something like that.

In addition, the geographical location of lake Baikal allows him to be in this place, which is the same distance to a good half of the busiest places of the Earth: Europe, Asia, North America. Only one place, and can appear as attacking and defensive plans against the most potentially dangerous countries.

Among the cons there is only one weighty argument: the tectonic situation in the Baikal area has a very high seismic activity, which makes any complex and risky projects is doubly dangerous and more risky.

The huge effort and incredible amount of funds can go down the drain because of a strong impulse which occur every few decades. Who cares? If the military is not interested in something more than just a convenient place, they would never take such unnecessary risks.

But if they needed the uniqueness of the lake, then nothing would become a hindrance to global construction. Especially Russian engineers can build such structures, which are able to reflect a direct hit of a nuclear warhead. What to speak of worldly shocks?

In General, Baikal certainly carries a lot, and thinking about it, we can not exclude any option. If the lake is so unusual, the unusual can go on and on, speaking in the most fantastic ways.