Mysterious fires frighten the inhabitants of the Azerbaijani village 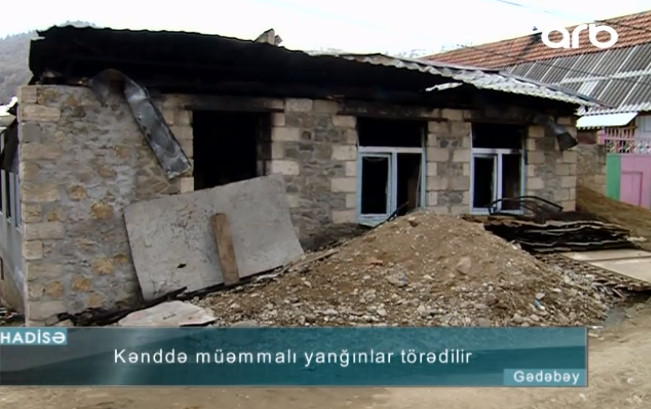 Fires occur in the village of Novo-Ivanovka of the Gadabay region of Azerbaijan for unexplained reasons.

According to the ARB channel, Zamina Ramazanova’s house caught fire at the end of last year. Despite the efforts of firefighters and neighbors, the fire quickly swept the entire house so that, in the words of the wife of the hostess Shaig Mammadov, it was impossible to make any matches.

According to him, the damage caused amounted to 100,000 manats. Sh. Mammadov expressed the assumption that thieves had entered the house, and when they left they set fire to cover their tracks.

After a while fires occurred on the farmsteads of four neighbors – this time they burned not houses, but bunches of hay.

According to one of the victims named Ramazan Huseynov, the fires took place in the evening with an interval of 10-20 minutes. The causes or perpetrators of these fires are still not established, and this causes fear among the villagers.

The concern of the villagers is easy to understand. As the saying goes, all the unknown scares us. As you already understood, randomness is excluded in this case. However, law enforcement officers of the district keep Olympic calm.

Thus, the police department of the Gadabay district stated that there was no reason for any concern, and that the causes of fires in Novo-Ivanovka were being studied.

At least, the strange statement of the police introduces some confusion. Houses in the village are burning like matches, and the police are not blowing their shoulders. At a minimum, the owners of the burnt houses are already worried that they are left without a roof over their heads, and the others are anxiously awaiting their unenviable fate. And you will agree that the excuse of the Gadabay policemen is not very much in tune with the motto “My police protects me”.

Video about fires (in Azerbaijani)

However, it is possible that the law and order police, after watching different programs about aliens, poltergeists, ghosts, the afterlife and so on, have turned into fatalists. Well, or their favorite book character is “The Invisible Man” by Herbert Wells.

And who wants to deal with supernatural forces? As one of the heroes of the famous film said: “Can you shoot the devil in the back? And suddenly, you will miss. ”

But still it seems that the truth is somewhere nearby, and the police just need to drive out the laziness and start looking for an attacker. No offense to the Gendebek people will be said, but in any way their district does not pull to the testing ground for the experiments of aliens. Although, if the human ways are inscrutable, then the paths of aliens and all things are even more so.