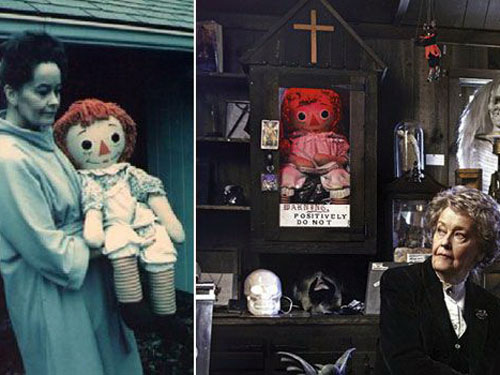 A few years ago on a wide screen out of a horror movie John Leonetti “the Curse of Annabelle”. Box office receipts in the United States amounted to tens of millions of dollars. The film was released outside the us and is being shown in other countries. However, in France, during the session, the audience was observed unmotivated outbursts of aggression. They were so pronounced that very soon in France decided away from sin the picture to show to prohibit.

Perhaps the reason for unwarranted aggression in viewers (by the way, not only French – this phenomenon has been observed in other countries, but not all authorities responded promptly) that the film is based on real events that occurred in 1970, when the doll became a real nightmare for their owners. However, it does not resemble the doll from the movie – the prototype was a rag toy.

In 1970, Donna, graduating from nursing school, the mother gave birth on the day of a rag doll Annie, bought it in an antique shop. Big – about a meter high – doll look are quite friendly, surprised eyes, nice smile, red hair.

However, the impression of a few spoil the triangle of red fabric instead of the spout – it was a reminder of the failure to place the nose of the skull. In the apartment that Donna was shooting with my friend Angie doll Annie found his place on the bed of the mistress.

After some time, the girls became surprised to notice that the doll changes position. “Every morning I seated her on the bed: hands – on your back, legs extended, – has told to journalists Donna. When we returned home in the evening, they found that her limbs were in a different position.

For example, the legs were crossed, and hands folded on his knees. After about a week began to arise suspicions. I decided to leave the doll with crossed arms and legs and see what happens tonight. Upon returning home, we found a doll with spread out hands. Each time we found her in all sorts of positions.”

It all seemed strange to the girls, but no more. They explained this by the fact that we just forgot, what was left of the doll. Truly girl was startled when one day he came home, he found Annie standing on her knees on the chair.

And if Donna was trying herself to put the doll on her knees, she fell. The next time the doll was already on the floor, leaning on a chair. I had the impression that her move about the room stopped the sound of the opening front door.

And after some time began to appear a note written in pencil on the parchment clumsy childish handwriting: “Help me”, “Call me” etc. But in the house the girls had no parchment paper, no pencils! The first thing that came to mind that someone else has access to their apartment and rummaging in their things.

That note can be related to the doll, no one thought to do that. And as such it could think of sane people, educated in accordance with the current through materialistic culture?

Donna and a friend set up some traps that are seen in spy movies: the Windows were sealed, and rugs and small objects were placed so that moving through the rooms one is sure to have them moved.

But it wouldn’t work. The traps remained untouched, but the doll continued to live his life. The impression that the force that moved the doll was still inside. Continued to receive and note.

Time passed, and gradually the girl got used to “living doll”. It would seem that Annie was configured friendly, and sometimes even in the apartment were found to have sweets, which nobody bought – as if gifts from the doll.

However, the rest came short. Two months later, Donna came home, saw Annie again moved from the bedroom to the living room. When she approached the doll, it captured the horror: hands and dress toys was stained with blood ooze from his chest.

Terrified friend asked for help to the medium, and she offered to hold a séance. As a result of the session found out that the house in which lived the girl was a wasteland, and there found the body of a seven year old girl, Annabelle Higgins, who died under mysterious circumstances.

The spirit of the girl told the psychic that she was happy in these places and asked for permission to stay, having descended into the doll. Donna then told: “We said it was fine. We are nurses and are faced with the suffering of people each day. We have a sense of compassion. Since then, we began to call the doll Annabelle”.

But the girls did not even know what the consequences will entail their agreement to leave the spirit of Annabelle in the same house.

Girls often visited a friend named Lou. I must say that he from the beginning did not like the doll, as if he subconsciously felt coming from her threat.

The young man repeatedly advised her friends to get rid of the doll, but they only waved. Donna even said that it’s like throwing a child. It seems that the doll doesn’t like the guy.

One night the young man woke up in his apartment, covered in a strange panic. Looking around, he at first did not notice anything unusual. But, taking a look at the foot of the bed, Lou froze in horror. At his feet sat the doll Annabelle.

Then she began to slowly move up the body of the young man. Lowe went numb with fear.

Reaching the neck, the doll began to strangle him. Then Lou remembered nothing – and lost consciousness. Recovering, he decided to get rid of the doll, despite the fact that understood that the spirit of Annabelle so forbade the young man to interfere in his Affairs.

The next day, Angie and Lou were discussing something in the living room, when the room Donna came a strange sound. As soon as the young man approached the bedroom door, the sounds stopped. Plucking up courage, he opened the door and saw that the room was completely empty, only in one corner lay a doll.

Approaching her, Lou felt someone standing behind him. But, turning around, saw nobody. Suddenly an unbearable pain shot through his chest, and he cried.

The scene by the Creek Angie caught the guy lying on the floor in shock. When they returned to the living room, Lou took off his shirt, I could see that on his chest there were scratches, like claw marks! There were seven of them: three transverse and four longitudinal.

After this terrible event, the young people realized that without professional help they need, and asked the priest, father cook, and he introduced them to the Demonologist by ed Warren, a former police officer, and his wife, psychic Lorraine.

(This couple was engaged after a year, the sensational case of “restless house” Aprons in Harrisville, which is reflected in the movie “the Conjuring” (2013). But the most famous Warren brought their investigation of the case in Amityville in the second half of the ‘ 70s.)

Having examined in detail the situation, Warren concluded: “there is no Annabelle! And never has been. You have been deceived. We are dealing with a demon.”

According to the Demonologist, the spirits of dead people do not possess inanimate objects, they have power only over people. That moved the doll could not be the spirit of a man, it was some evil spirit.

He moved Annie, creating the illusion that she’s alive. And he had the spirit of a little girl, through compassion, to seek permission to remain and intervene in the lives of girls, and in the future to move into one of them.

Warren stressed that it was something evil entity, and was advised to perform an exorcism. The ceremony was held by father Cooke, who took an active part in this story. Curious, but no resistance while the demonic doll did not have. After the ceremony, father Cooke assured those present that the demon will no longer ruin their lives.

However, Chet Warren has been configured not so optimistic, so they put the doll in a bag and took it with him.

Father cook, saying goodbye to Warren, advised them to go home the back roads so as not to expose other drivers of danger, because no one could know what to expect from demonic passenger. And, as it turned out, the priest was right.

At the front of his car a few times on turns, it brakes failed a couple of times the driver narrowly escaped a collision. Finally the patience of Warren burst.

He stopped the car, Annabelle sprinkled with Holy water and cross over it. Home after this procedure have reached without adventures.

The first time the house of Warren, the doll was quiet, and then he did it again. She was moved and went up in the air.

Unable to cope with the demon, Warren was invited to help the exorcist father Bradford. He has not behaved very carefully, grabbed the doll and began shouting at her: “You’re just a doll, you can’t hurt!” and left Annabelle in the chair.

The blood was a little worried because the father of Bradford behaved provocatively with a doll that was supposed to lead to trouble. And so it happened: on the way home the exorcist was involved in a serious accident and miraculously survived.

Thinking that Annabel is a deadly danger for persons. put it in a sealed glass box with the inscription: “do Not open”. She became an exhibit in their occult Museum.

Once the Museum was visited by a young couple. The guy, wanting to impress the girl began to pound on the glass box and ask the doll to show your claws. Warren told the foolish visitors to immediately leave the Museum.

On the way back the young man’s motorcycle crashed into a pole, the guy died on the spot, and the girl spent a whole year in the hospital. And this, according to Warren, not a single case of revenge Annabelle.

In 2006, ed died, and Lorraine, which next year will be 90 years old, continues to maintain the Museum.

Until 2014 the doll was not able to leave the prison, but she changed the posture, being in a glass box.

And the last two years at the Museum of Lorraine began to happen strange events. Annabelle is the mistress of the mirrors and inspires her terrible thoughts. Lorraine says that in my head constantly is: “Death”, “Kill”.

Chet Warren 40 years did everything to Annabelle remained a simple exhibit in their Museum, and now Lorraine strength is not enough, and the doll is again a deadly threat.

Lorraine said that the Museum will be closed until then, until it will be convinced that demonic doll neutralized.

However, as it is going to neutralize the doll is not yet clear. Only one thing is clear: the destruction of a simple toy could do, and to get rid of it possessed of a demon, apparently, is not so easy.

The researchers working on this problem, could not appear a question: why the devil chose this doll? Most likely, it’s the author of the antique dolls and the mood and condition in which he (or she) created it. It is well known that the doll often, not just a toy, but a purely magical object.

Moreover, the toy doll was not so long ago, at the dawn of its existence, the image of a man in the form of figures acted purely magical.

No wonder many mystical cults a cult of Voodoo dolls used as shelter for a variety of entities. The doll was nagovarivaete curse, they had done a love spell or a conspiracy to death.

Modern dolls often create around themselves a kind of energy field felt by psychics and people with increased susceptibility.