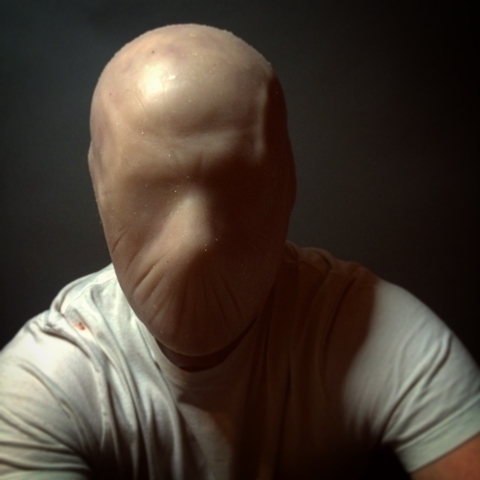 Both of these strange cases were sent to the researcher of anomalous phenomena Alexei Prime and published in his book in 1998. Therefore, it is difficult to accuse their authors that they supposedly had read online horror stories about Slenderman, or about the other tall skinny faceless monsters. The authors also strongly insisted that these were not hallucinations and not dreams, and it all happened in reality in the usual place, their own homes.

Seeped into the ceiling

Andrey perepelitsyn from Kaluga sent the story about the incident that happened in the house of his compatriot Nina Ivanovna Burdykina, whose age is 70 years. 19 Jul 1994 Nina Ivanovna has buried the dearest to her on Earth — her own husband. Stayed in their Studio apartment in sorrowful solitude. Two weeks after the funeral, the early morning of 4 August, in her lonely life is invaded by Unknown.

Here is the story of N. I. Burdykina:

— As always, I woke up at six in the morning. Sat up in the bed, pulled her bare feet on the floor and reached a hand to the chair beside the bed. Picked up the stockings, was lying on a chair.

Was just about to pull the stocking on his leg, heard a sound like the rustling of crushed in the palm of Newspapers. At the same time heard some muffled, very faint chime. And the rustle and chime, barely audible, came from the left, from the corner of the room where stood the TV.

Then the ringing stopped, and the rustle of Newspapers crunching” has increased dramatically. Immediately I heard a new sound — shuffling steps. Unknown who leisurely walked around the room, walks toward me from the place where stood the TV.

Hearing all these sounds, I was surprised, ” continued Nina. For was in the apartment alone. Who broke into my house while I was asleep? Really thieves?.. I turned my head to the left and then looked in the direction whence came the rustle and chime, and then the steps.

There was no fear. I remember I was just amazed. See, slowly, very slowly approaching me a woman. More precisely, someone vaguely resembling a woman. The figure froze, close in front of me, sitting on the bed. Externally, it looked like a kind of crazy parody of a man.

Growth — the nightmare of the stranger did not exceed five feet. She was poor: skirt up blouse. Skirt — an old, faded, ashen, gathered pleats at the waist. She rested on the hips somehow uneven, slightly pericoronitis. I thought the skirt was made of thick paper, pasted on top of cheap calico. It is ugly, messy stood out in all directions, not adhering to the body.

The shirt on the stranger, up to the waist, too, was made of paper. In contrast to the solid skirt, the blouse could be seen the thin vertical black lines at a distance of about two centimeters apart. The sleeves of this striped blouse was a long, free, completely hidden hand…

Now, about the head, in the highest degree strange. The silhouette and size it resembled a human. The skull was covered with short bristle hairs lightest blonde. Well, the face… all of Me and shuddered when I saw it. No ears. Moreover, nothing on the face — no eyes, no nose, no mouth, no eyebrows! Nothing but skin with a slight tan, obtyagivali skull tight as a drum.

“Who are you? Where are you from?

The answer did not wait.

Instead of answering the mysterious creature in the ladies ‘ blouse and ladies the skirt fluttered and moved with the whole body. Rolled up his legs, moved his elbows. Wide spacious sleeves came off in the hand, revealing the hands. To his own horror, Burdykina don’t see in the wrong hands, nor palms nor fingers. His hands were like two sticks, rounded, and covered with lightly tanned skin where there was supposed to be wrist.

The creature jumped and hovered in the air. Only at this point, Nina noticed his legs covered by a skirt to her knees. From under the skirt protruded two thick bone, completely devoid of feet. They were covered in the same tanned skin as “a person without a face and hands without fingers and palms.

All eyes staring at those incredible legs, Burdykina screamed. She saw how his legs began to happen unimaginable metamorphosis. Feet began rapidly to thin. They stretched in length and at the same time dried. A “woman without a face” is slowly raised vertically upward, vesperae to the ceiling, just a balloon… And now her legs turned into something resembling two thick ropes.

Then the “rope” suddenly rapidly curled, forming something like a braid with wide loops. While all this was happening, from the “women” again was heard a sound like paper rustling. Figure with legs-“ropes”, twist spiral, pulled up and in the blink of an eye disappeared from sight, disappearing into the ceiling.

— A little recovered his breath and came to himself after what happened, I climbed on a chair and looked at the ceiling. Not found it neither cracks, not to mention some hatch leading through it somewhere upstairs. To this day I can not understand where and how disappeared this creepy lady with no face, the palms on the hands and feet without feet, turned into two “wire”, zakruchivaetsya screw.

How she managed to fly from the room through obviously impenetrable ceilings consisting of reinforced concrete slabs?.. Would like to reiterate here that it was not a dream. I was sitting on the bed, holding the stocking, and slack-jawed staring at what was happening in front of me… I don’t know why, but in my mind the phenomenon of creepy creatures somehow intuitively linked with the death of my husband that occurred two weeks earlier.

Fifth of April in 3 hours 30 minutes night, I woke up abruptly with a start in the side. Barely awake, automatically glanced at the luminous dial electronic clock that stood on the bookshelves. These shelves were hung one above the other on the opposite wall of the room…

Then I behaved as I understand now, weird. Not knowing why they do it, quickly got out of bed and headed to the door leading into the hallway. One single thought is powerful, as the lantern was burning in my head: “you Should immediately leave the room as soon as possible to get out of it somewhere, for example in the kitchen”.

Lydia was already one step away from the door when something made her turn around.

— With all my heart, “she says,” I felt close crushing opinion that someone has looked at my back.

The woman looked around. And quietly gasped.

The bookshelves were standing in the room the wardrobe. Between him and the shelves was a small space — a plot of bare, undisguised wall width in meter. Kornicka saw the bare walls of the high — rising to the ceiling — the shape is very narrow, as if tapered to the left and right. The figure was completely flat, just cut from a piece of sheet metal. Along the scrawny body hung abnormally long arms.

The oval head had no neck, was sitting on her shoulders. The face was absent. Instead, in the center of the oval was a black round spot, like the words of Lydia, at the target. With the exception of this spot, the entire figure glowed sometimes light, white-blue-green.

That kind of intuitive insight told Lydia that it was a man. She insists the man, not the woman, although in the form of a flat as a plywood sheet, the stranger is not viewed any sexual characteristics.

I screamed obscenities good, seeing this monster, ” says Kornicka. — Rushed back to the bed and began to shake her husband, who was sleeping peacefully.

And now — the story of her husband:

— Lydia literally shook me out of a deep sleep. She grabbed my shoulders and in full voice shouted the same phrase, very strange, constantly repeating it: “I only you will fly! I only fly with you!..” My question is, where exactly she was going to fly “only with me”, the wife could not say anything intelligible.

Women’s screams were heard in the next room, where rested the parents of Lydia.

We ran in, extremely frightened, in a bedroom for our daughter and her husband. My daughter was in hysterics, pointing at the wall between the dresser and bookshelves. We did not see in the wall is nothing unusual. There was a wall, just a bare wall. But on the face of Lydia froze such a crazy face that we just had a terrible thought: our daughter had suddenly gone mad. For a long time we calmed her. Otpaivali Valerian.

Pouring in a glass of Valerian drops, wandering up and down the room, we suddenly surprised remarked — floor it splattered in big drops of water. The maximum number of drops was observed on the floor in the wall between the dresser and shelves. The farther from the wall, the less it drops. Where they came from is unknown. Until the morning none of us already went to bed. When dawn came, we noticed that the pier another oddity. Wallpaper on the wall there, and only there, swollen with bubbles over the entire height of the wall, from floor to ceiling.

For nearly a month after this incident, Lydia Kornicka felt disgusting. She was tormented by headaches and stabbing pain in the heart. Felt General fatigue. At the same time and the same for nearly a whole month her head was ringed… some invisible Hoop!

Lydia wore glasses. Whenever she wore glasses, their ear pieces delicately clung for a moment for a narrow invisible ring, which covered the head, forehead, temples, neck. At the time of “clues” ring temples, both paired disturbed, twitching. The woman clearly felt the breakthrough of invisible Hoop.

Multiple probing of the skull by the fingers gave a null result. The fingers found no Hoop on the head, albeit invisible… After about a month, the Hoop disappeared. In any case, earhooks ceased to cling to him, when the woman wore glasses.