Riddles of the Pokaynsky wood 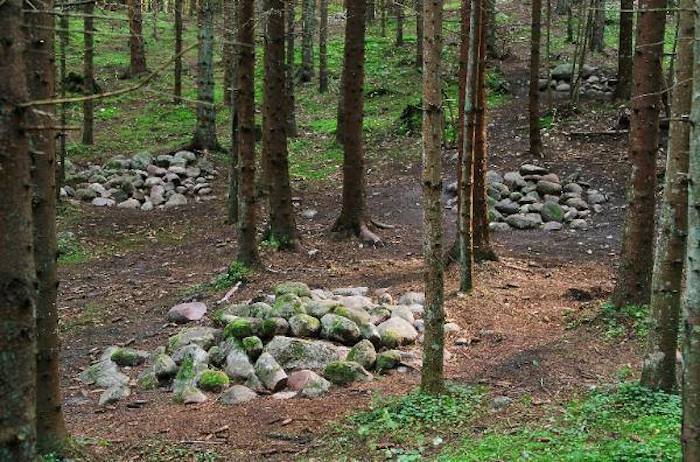 The Pokaynsky wood is located in the Dobele district of Latvia, approximately in 90 kilometers from Righi. It occupies the space of 400 hectares. Till the 20th century there was a hilly field covered with infrequent bushes here.

Started talking about uniqueness of this place in 1996 after the Riga researcher, the former engineer Ivar Viks told to journalists of the strange meteorological things and mysterious properties of stones from the Pokaynsky wood. Soon after that Viks died from precipitantly developed oncological disease.

Researches were continued by other Latvian scientist – Evgeny Sidorov, as a physicist-radio electronics engineer. He found out that the Pokaynsky wood is the place of a pilgrimage of the numerous tourists attracted with rumors that this region has salutary force. Already by then forces of enthusiasts between stones laid tracks, and some boulders received the names.

Place this really mysterious. Hills in the wood exactly thirty. Foliage at oaks for some reason grows only on the one hand. But most of all tourists strike local stones. Nobody plainly can answer a question from where these weighty boulders undertook.

Someone as an explanation offers a hypothesis that pilgrims from all Europe gathered in age-old times here and left in the wood stones as a symbol of a forgiveness of sin. The assumption is closer to someone that under one of hills a certain mysterious object is based: whether radioactive meteorite, whether ancient burial. 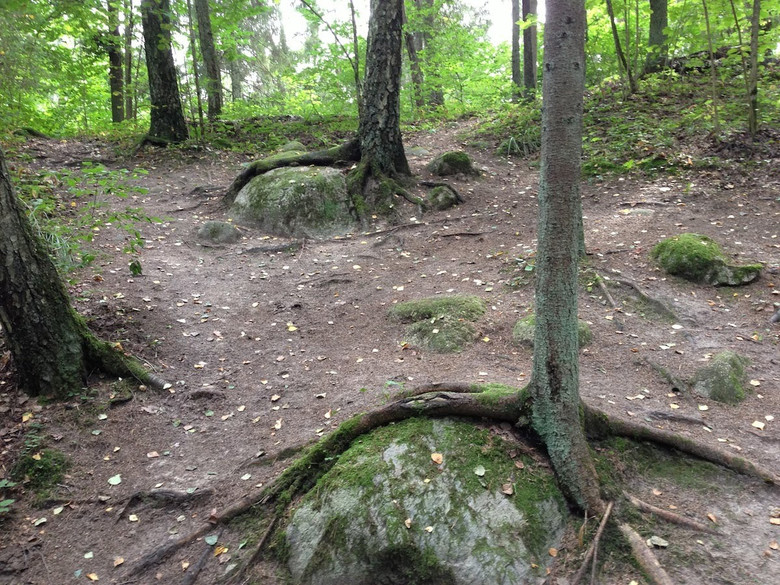 Someone considers that it was a pre-Christian pagan sanctuary of zemgal (one of the baltskikh of the people). Sometimes say that here 30 priests-druids gathered, each of which operated weather from “the” hill.

Old residents especially tell about the hill under the name Pyramidal tower much. It is not excluded that the hill this man-made and once was hollow. The pyramidal tower can be something like a dolmen – the sanctuary of an era of megaliths intended for transition to another world of priests and hermits.

Ancient zemgala were able not only to expect the future, but also to partly change it. And by means of special rituals they allegedly for a while became invisible and brought women and children out of the besieged ancient settlements in shelters.

Not made by hand Graal?

Ivar Viks was sure at all that all 30 hills the man-made, and scattered on the wood stone layings – parts of the composite system creating effect of a power resonance. In favor of this version it gave also the fact that fungi in the Pokaynsky wood grow the fantastic sizes, and crowns of local oaks as if are twirled in a spiral by a certain unknown force.

He even made a hypothesis that legendary Graal is not man-made treasure, but the stream of space energy spilling in a bowl of the Pokaynsky wood. 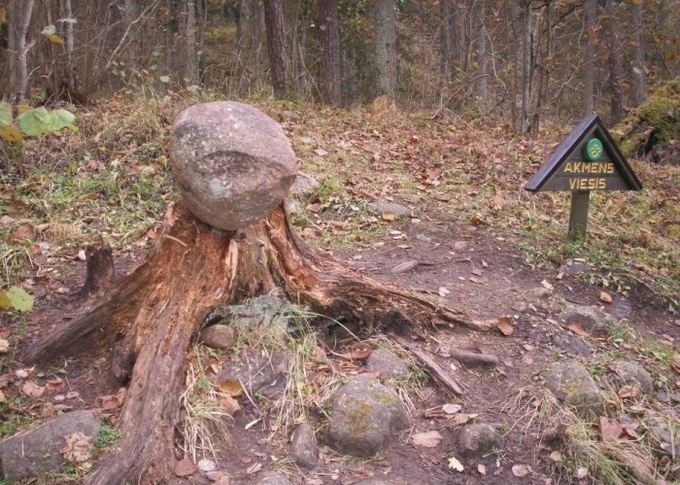 The singular riddle is represented by temperature anomalies. Many of boulders in any weather remain warm to the touch. They have curative properties: one can cure of diseases of joints, others – of osteochondrosis, the third – of female illnesses. But there are and here dangerous stones, hiting at which it is fraught with negative consequences.

Sometimes tourists, having given in to a temptation, took away the attracted stone for memory, and then bitterly were sorry about it: soon they became victims of illnesses or accidents. But anyway even the most relentless sceptics, having visited the Pokaynsky wood, leave believed in the miracle force of a stone and the wood from there.

Also the special place in the wood which is called the Valley of perfume is remarkable. Not because people meet ghosts there – it is about the strange shining spheres invisible with the naked eye, but legiblly shown on pictures.

Specialists of the Latvian center of researches of the abnormal phenomena of UFOIats gave this phenomenon the conditional name ШОНГи – “spherical objects of unknown genesis”. 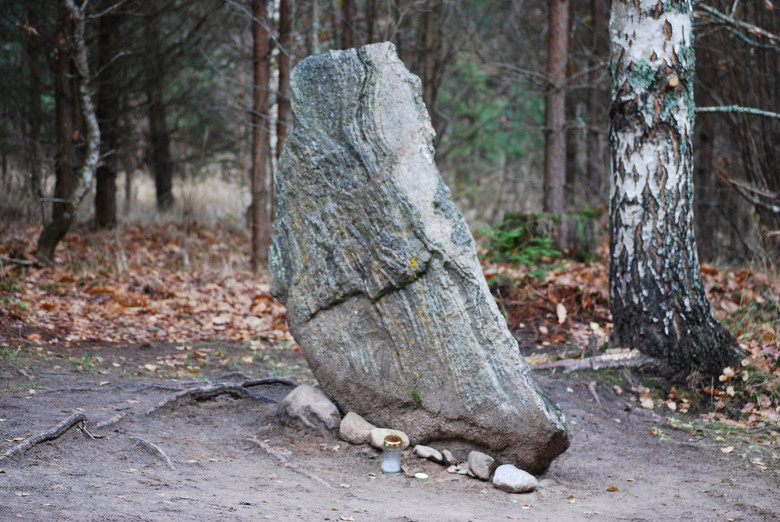 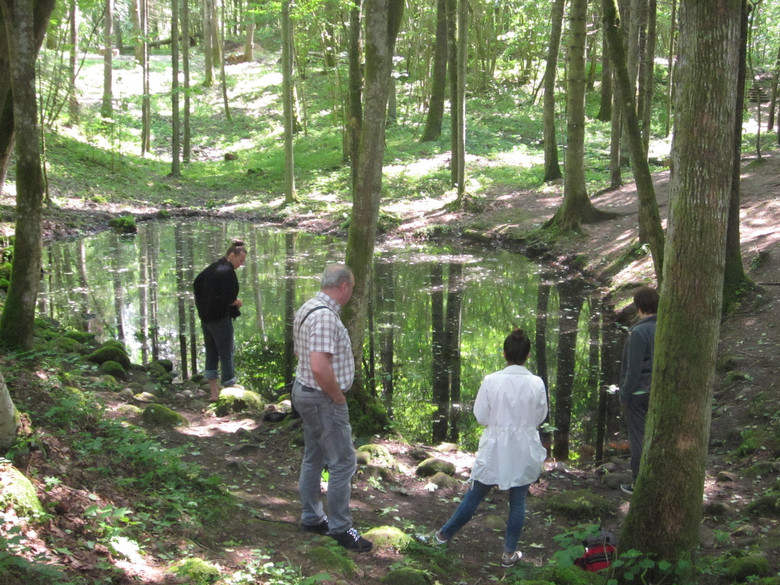 Evgeny Sidorov believes that the shining UFOs can have the psychofissile nature. That is they can be allocated with reason! The psychics who visited a zone, contactors and yogis sometimes managed with the help of meditative exercises “to call” UFOs which were fixed by the photoequipment. It confirms the version about the reasonable nature of objects.

Curiously and the fact that, according to the American professor Jim Hurtok, still in the mid-seventies the last century satellites of NASA, tracing military activity of the USSR, recorded a potent source of unknown underground radiation in the territory of Latvia.

The center of this anomaly with a diameter about 340 kilometers was in the neighborhood of the Latvian city of Dobele. Yankees inaccurately considered a source of radiation the certain reliably secret military facility hidden in a subsoil the pokaynskikh of hills. However this version was not confirmed.

I know the secrets of stones, but will not tell!!!! Sorry, you must know me first, but that will NEVER happen, because the only who get to know me are my WAIFUS.