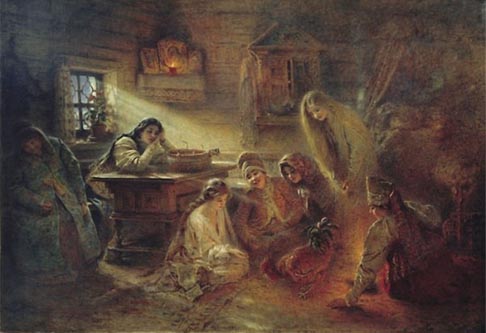 In the history of the poltergeist known dozens of court cases initiated in connection with mischief of noisy spirits. In the role of defendants usually were people: the media and victims of the phenomenon, sometimes the whole family, and even strangers, suspects of “overlap” poltergeist through witchcraft. Fate brought in the old days used to go unenviable: they were sentenced to death, were subjected to cruel punishments.

In more recent times, it happened, the court did not see “acts” prosecuted of a crime — it became clear that the actions themselves are simply not there! And then the suspects were acquitted. And defendants in fact became noisy the spirits. In such cases, the decision relied on the judgment of God, and the case was closed by the official decision of the court: don’t attract, in fact, responsible spirits.

In some cases, into the hands of researchers get copies of court decisions in cases associated with outbreaks of the poltergeist.

These documents reflect the attitude of the court and society to the phenomenon at certain times, and give into the hands of researchers of eyewitness testimony and has testified before the court the reality is contrary to common sense accidents.

To such documents applies the following copy of the decision of the Vilnius combined criminal and civil court chambers on 28 may 1874. Here is the full text of this unique resolution:

1874, may 28 day. By decree of His Imperial Majesty Wilensky United chamber of criminal and civil court criminal Department listened to a criminal case of peasant Bardadym, accused of fraud. Reported to the Secretary of Prokopovich.

The circumstances of the case: Vindigulsky the village chief told Umilissima the municipality to the Board that on 26 January 1874 in the village of Secondany Yakov Yakovlev Bardadym, agreed with the farmer Dominique Beganski fee of 30 cents after receiving a bottle of milk, it is unknown what he was doing, and after this ordered to give milk to a sick child Belinskogo.

After the departure of Bardadym in the house Bieganski has been an extraordinary phenomenon: left Bardadym bottle of milk passed from place to place in the house Begansky some mysterious force threw hay, twigs and stones. This phenomenon continued for two days until invited Jacob Bardadim.

Upon arrival his in the house Begansky all was quiet, but herewith Bardadym demanded Belinskogo 15 rubles for the termination of an extraordinary cast of stones and other things, but agreed on 5 rubles, and two harnzah vodka, which was from Belinskogo.

The farmer of Saint-Petersburg province Novoladozhsky uyezd Yakov Yakovlev Bardadym, 31, by trade a farrier, showed that he gave a bottle of milk, after reading on this milk only of prayer, at the request Belinskogo, for the healing of the child, whose had a hernia, because I knew that milk helps with hernia, the money 5 rubles took Belinskogo because a few years ago this amount he loaned brother Belinskogo, now deceased.

About the reason for the extraordinary circulation of the bottle, throwing stones and other housing Beganski knows nothing, haven’t seen it and no one in the strike for the deception of the peasants was not: it really brought to Beganskaya, but why not remember because he was completely drunk, and what happened there, does not know.

Dominic beganski under oath testified that when he got sick, he went to the sorcerer, but on the way met Bardadym, who learned about the purpose of the trip, asked for a bottle of milk, something whispered and passing a bottle of indicator (i.e. Dominica Beganskaya), ordered to give milk to a sick child. For this indicator gave Bardadym 30 cents.

The child became worse, not better, but after the return of the index home, the evening began with kiln cast stained chips of wood, frosted stones and other items. And on the third day tied the bottle began to move from one place to another when the same was thrown out in the yard, it again appeared on the scene, but finally the figure broke the bottle.

It lasted for two weeks. After the figure is invited to Bardadym, and on arrival his in the house had ceased, and the figure gave Bardadym 5 rubles and were offered two bottles of vodka.

March 6, after the beginning of the case when Bardadym was kept in prison, throwing started again and occurred not only in the room, but also in other buildings and in the yard all this only happened at home, and in front of strangers continued.

Six of the neighbors Begansky testified under oath that they witnessed the throwing of stones, wood and other items in the apartment Beganski when they came Bardadym tipsy but not quite drunk, and asked Belinskogo for the pacification of 15 rubles, and then agreed to 5 rubles, and immediately drank two garnets of vodka.

Soon Bardadym was arrested by township authorities, and after leaving it again started throwing stones and other objects within two weeks, then stopped, and on March 6 began again.

Witnesses Pisac and Circus testified under oath that they saw a bottle passed from place to place, wherever delivered, returned to the threshold in the vestibule. And there returned and once was thrown into the yard when the bottle was tied with a rope to a nail, the rope was untied and the bottle returned to the threshold. While residents were also in the throwing of stones and other items and looked over the hut, then anyone who could leave, did not find, and found no holes in the ceiling in the place where he was throw stuff.

The magistrate, upon inspection of the house and other buildings of peasants Begansky, recorded in the minutes of that inspection, nothing suspicious was found. Hut Belinskogo quite spacious, well lit, no holes in the ceiling or in the walls, not even the ceiling can not reach.

The accused Bardadym given March 9 of this year by a magistrate on bail Troki townsman Jacob Malinowski. Bardadym taken a knife and two Lancet for the transmittance of blood submitted to the House and stored in a number of exhibits.

The friend of the Vilna Provincial Prosecutor Grigorovich, whereas that produced on this subject the investigation said:

1) That is not found that any farmer of the St. Petersburg province Novoladozhsky uyezd Yakov Yakovlev Bardadym, 31 years, returning Beganskaya a bottle of milk as a means for her health of a sick child, appropriated to themselves any supernatural properties or qualities attributed to or would those given them in the bottle to drink.

2) That is not detected well below Bardadym took any actual part in throwing different kind of items and the termination of this phenomenon in housing Beganski.

3) And that the testimony of witnesses of Marcianna Baganskoy, Adam Pinaka, Anton and Vincent Belsevica and Corluka Bardadym incriminating in the fact that he had received from Belinskogo 5 rubles and 2 garnets of vodka under the pretext of pacification in the house Begansky cast stones, etc.

On the basis of this, he is accused lured the peasant Dominica Belinskogo 5 rubles and 2 garnets of vodka under the pretext of taming the house Belinskogo throwing stones and other objects, that is, the criminal act stipulated in paragraph 2 of article 174 and article 173 of the Charter of the penalties imposed by justice of the peace.

Ordered: upon consideration of the present case it appears that at the request of the farmer Belinskogo, confirmed six of his neighbors under oath, in his house on January 26, during a long period of time was cast from the corner where the furnace is, different objects unknown.

As it has happened after receiving Beganskiy from farmer Bardadym milk bottles for the treatment of a sick child Belinskogo and, in addition, with the above-mentioned bottle, on the testimony of the same Belinskogo and its neighbors, as there is a strange phenomenon — it is from unknown reason had moved itself from place to place, Belinskogo and his neighbors have formed the belief that Bardadym, and because he was invited into the house Belinskogo, and after the arrival of his throwing different objects stopped, and for the pacification of the Bardadym demanded 15 rubles, but was limited to 5 rubles and two garzoni vodka, which was from Belinskogo.

Although Bardadym in earning money and vodka for the pacification of the cast in the house Belinskogo different subjects confessed, and showed that the money was received in return the data to the brother Belinskogo, but as the statement Belinskogo confirmed six of his neighbors, witnesses, questioned under oath, Friend of the Vilna Governorate of the Prosecutor of the USSR in the act of Bardadym sees a misdemeanor, provided 173 and paragraph 2174 articles of the Charter of the penalties imposed by justice of the peace, that is fraud.

(a) that fraud, the law recognizes the stealing of someone else’s movable property by means of any fraud (1665 article of the penal Code).

b) That, although Bardadym received from Belinskogo 5 rubles for the pacification of the cast of different objects in the house Belinskogo, but to cast such items has been prepared, Bardadym, or to accept in any part, a consequence of not detected and not even discovered guilty, one receiving money for the promise to stop throwing objects in the house Belinskogo can not be considered a deception, because, according to the testimony of the witnesses, such upon arrival Bardadym stopped, and although it began soon again but after his arrest for lack of the form (permit).

Moreover, if he was not arrested, it may be, could really take any natural measures to stop the mentioned phenomena, the Chamber finds that he, Bardadym, on charges of fraud should be exempted from the judgment on the basis of article 304 of the 2nd book of the XV volume of the Laws.

As for privatelist of Bardadym without a written form, the fact that, on the basis of 1220 articles of the Charter of Criminal Proceedings, subject to review of the police, and therefore the case should be transferred to this subject in Trakai County Police Department.

1) Peasant Novoladozhsky uyezd of the St. Petersburg tovarniy Yakov Yakovlev Bardadym, 31, on charges of fraud, on the basis of article 304 of the 2nd book of the XV volume of the Laws from the court to release.

2) this case is transferred to the Troki County Police Department for disposal on the subject of privatelist of Bardadim and predergast it without a written form, to require the police case under consideration to present to the House.

3) this Sentence to declare Bardadim at the place of residence of his in the city of Troki, as well as to return what was taken from him and stored in the House a knife and two Lancet by Trakai County Police Department, which prescribe the release of Troki tradesman Yakov Ivanov Malinowski from security Bardadym according to this case.

4) these things to consider in the House resolved.