Scary photos, which did not find an explanation

Do you believe in ghosts? Of course, most of the photographic evidence of paranormal phenomena turns out to be a fake, but some still can not be refuted. For several decades, mankind has been trying to find an explanation for these photographs, which horrify and deprive especially sensitive people of sleep.

November 13, 1974 Ronald Defeo killed his father, mother, two sisters and two brothers in Amityville on Long Island, in a house at Ocean Avenue, 112. 13 months after the murder, the house was bought for the family of Lats. But after 28 days they left the house in a hurry, leaving all their belongings there. According to the new homeowners, during the entire stay they were terrorized by various supernatural phenomena. This photo of the ghost boy was made in 1976. 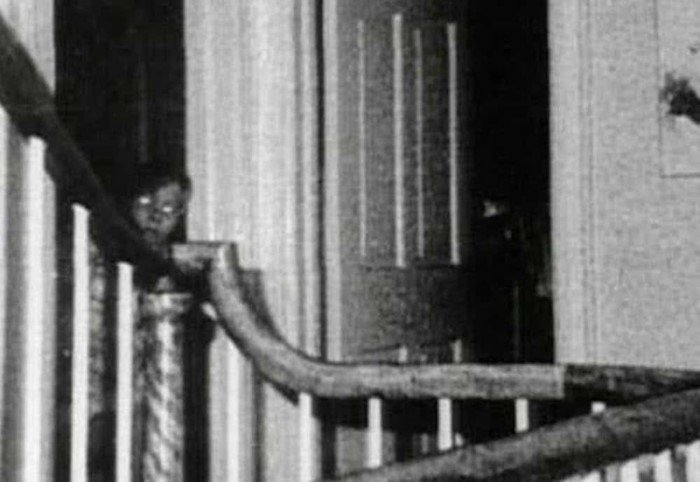 14. An elderly woman and her deceased husband

On August 17, 1998, Denise Russell brought her grandmother to a family picnic. This photo was taken that very day, only here behind the elderly woman there was nobody. In the picture, Denise noticed the grandfather, who died 12 years before that picnic. 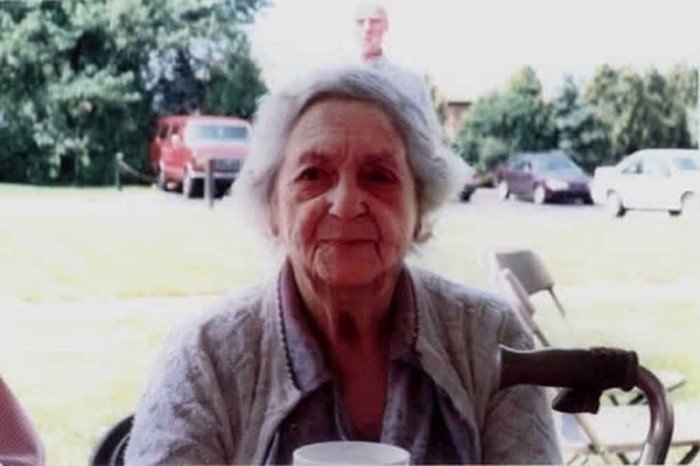 13. The ghost of the Cooper family

According to the story, the Cooper family bought a house in Texas in the 1950s, arranged a housewarming party and made a couple of family photos. When the pictures showed, they showed a strange figure, as if hanging from the ceiling. There are speculations that this is the ghost of the murdered former owner of the house. 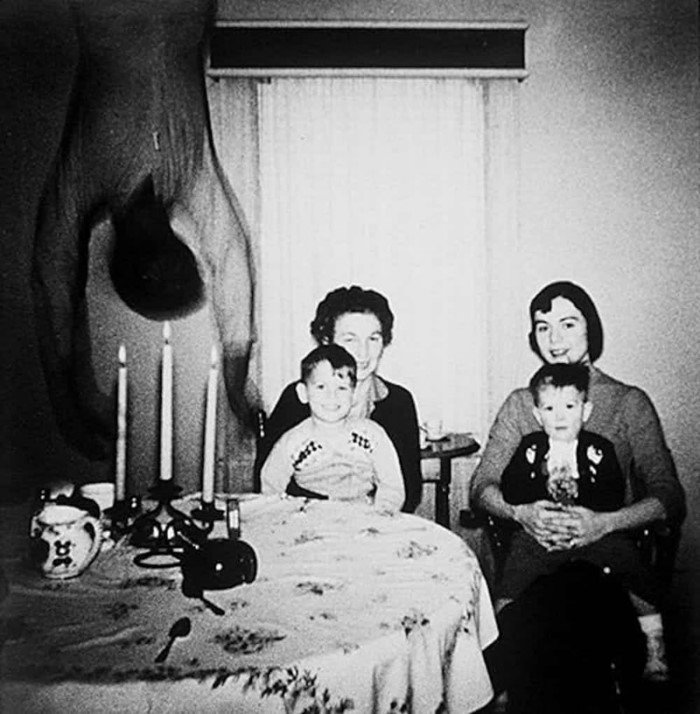 This photo is dated to 1907, it depicts a creature called kadborosaur. According to eyewitnesses, fishermen managed to catch this mythical monster in the waters off the coast of Seattle, Washington. 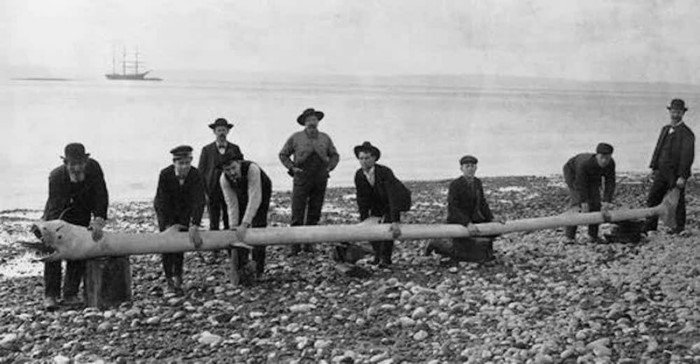 11. The Demon in a Hospital Bed

The shooting of the video camera in one of the hospital’s chambers fixed a dark figure running along the patient’s body. A few hours later the patient died. 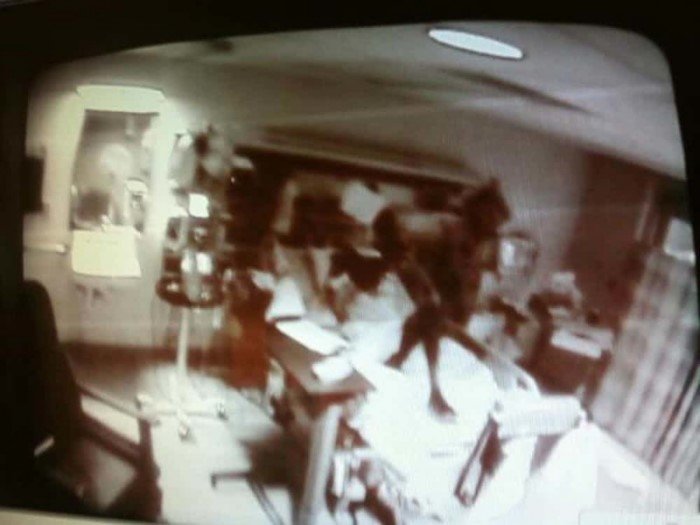 In July 1910 in Jefferson County, Kentucky, a sanatorium for tuberculosis patients was opened. At that time in the arsenal of doctors there were no antibiotics, so 95% of the patients died within the walls of this institution. In room 502 there were 2 suicides. One of the nurses jumped out of the window. Another named Mary Lee, being pregnant, hanged herself on a pipe. They say that she committed suicide because of tuberculosis. Since then, her ghost has been walking along an already abandoned sanatorium.

In 1964, the British, Jim Templeton during a walk photographed his daughter near the Bay Solway Firth. The tambletons claimed that there was no one else in the meadow. And after developing the pictures on one of them, a figure of a man in a spacesuit standing behind the girl was discovered. 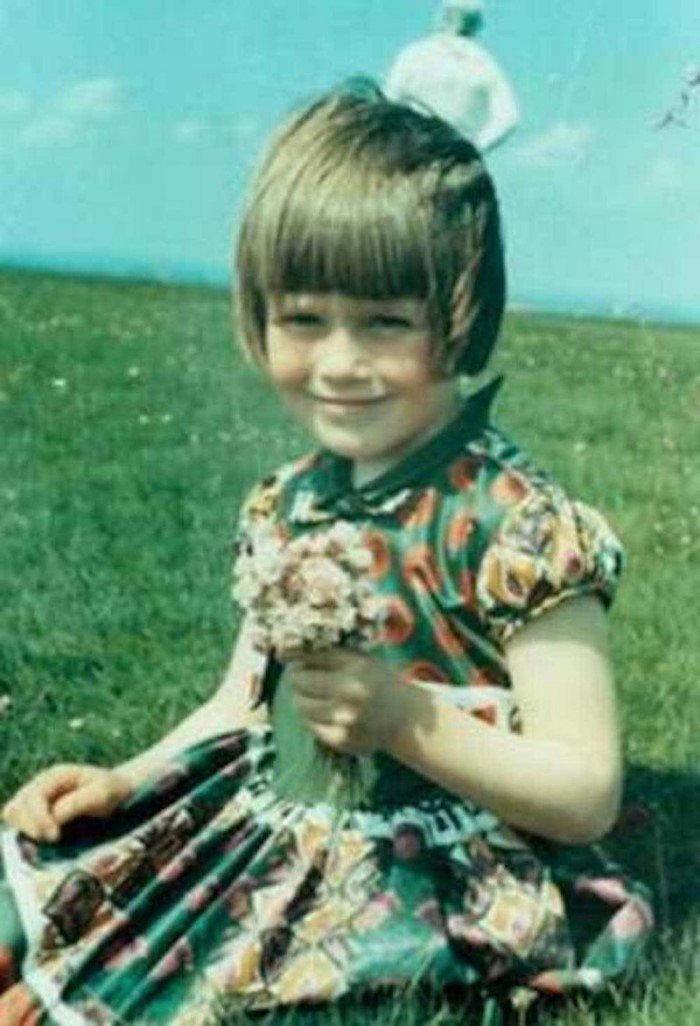 8. Passenger in the back seat

In 1959, Mary Chinnery came to her mother’s grave and took a photograph of her husband waiting for her in the car. When the film was shown, a female figure appeared on it, sitting in the back seat, the family recognized her as the dead mother of Mary. And the experts failed to prove that this photo is a fake. 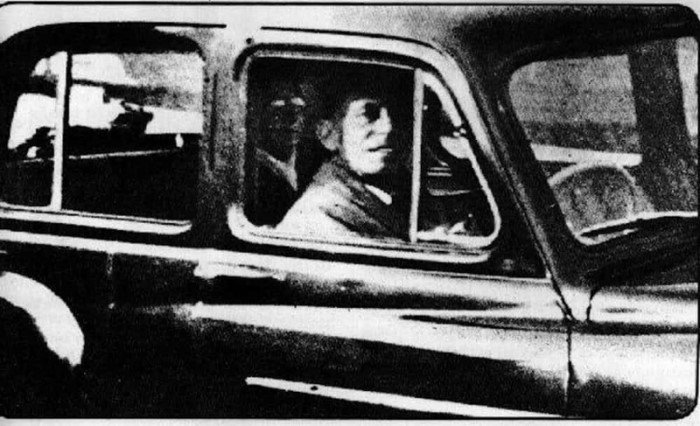 7. Ghost on the film

While watching the movie “Three Men and a Baby” in one scene, a boy is seen hiding behind the curtains. It turned out that the shooting took place in a house where a child died a few years ago. According to the creators of the film, in that scene there is no ghost at all, but an actor’s cardboard dummy Ted Danson, accidentally caught in the frame. 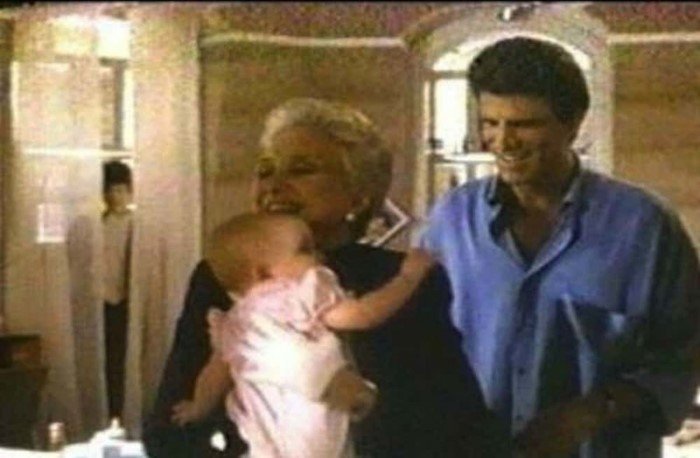 According to legend, the Brown Lady from Rheinhem Hall is the ghost of Lady Dorothy Walpole, who was married to Charles Townshend, the second Viscount of Townshend, who lived in Norfolk, England, in the early 1700s. They say her husband suspected her of treason and imprisoned in one of the towers. Since then, Dorothy’s spirit is often seen in the estate of the Rheinhem Hall. 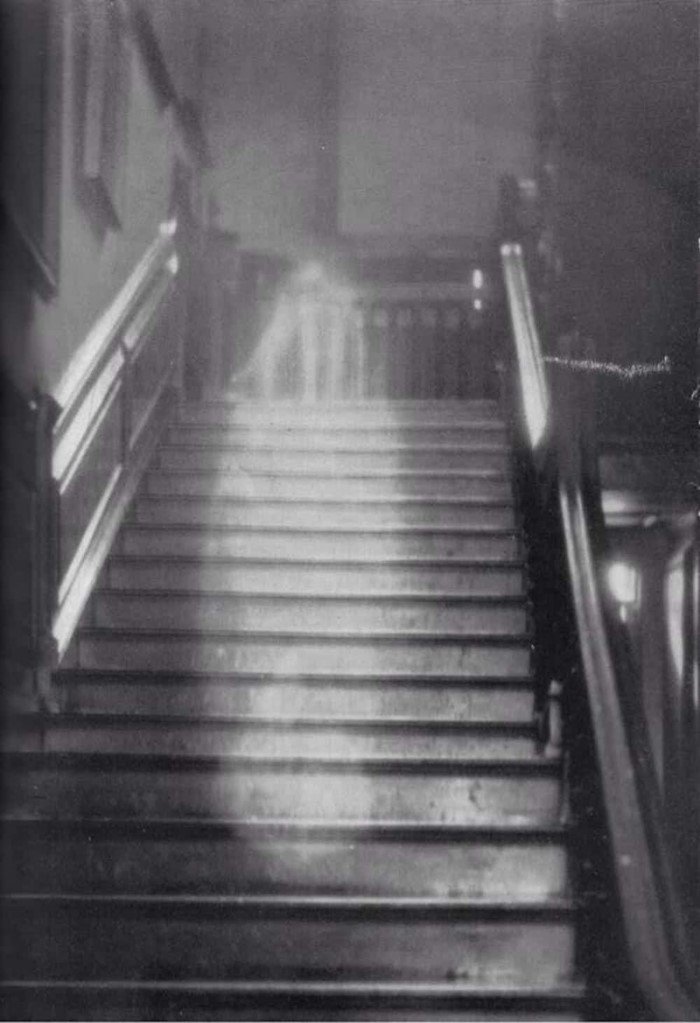 5. Paranormal phenomena on the plantation of Mirtov

Built in 1796 in St. Francisville, Louisiana, the Myrt plantation is considered one of the most macabre places in America. In the mansion there were many deaths, including violent ones. Eyewitnesses talk about strange sounds, fingerprints on mirrors, spontaneous piano playing and the loss of jewelry on the plantation. It is known about the often appearing ghost of the slave Chloe, who was brutally murdered and thrown in Mississippi. 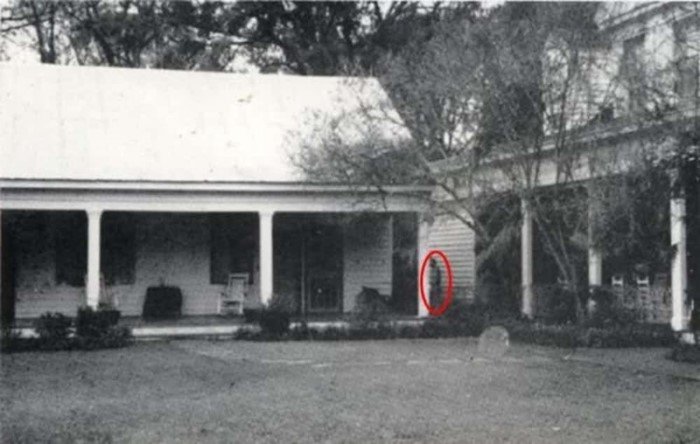 In 1996, actor Terry Icke Clanton, in the form of a cowboy, was photographed at Boothill Cemetery in Tumston, Arizona. On the right of the man you can see a figure in the clothes of the Wild West, only at the time of shooting there was no one … 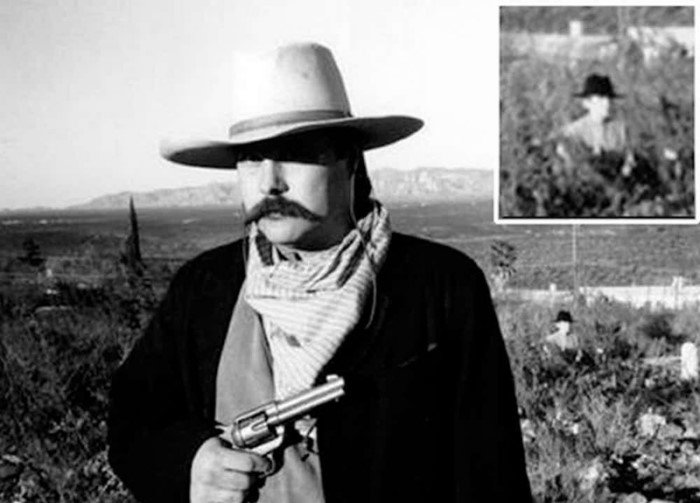 This photograph was taken in 1919 during the First World War. A group portrait of the squadron, for some reason portrayed aeromechanic Freddie Jackson, who died in an accident two days before this shooting. It is noteworthy that Jackson’s funeral took place that very day. 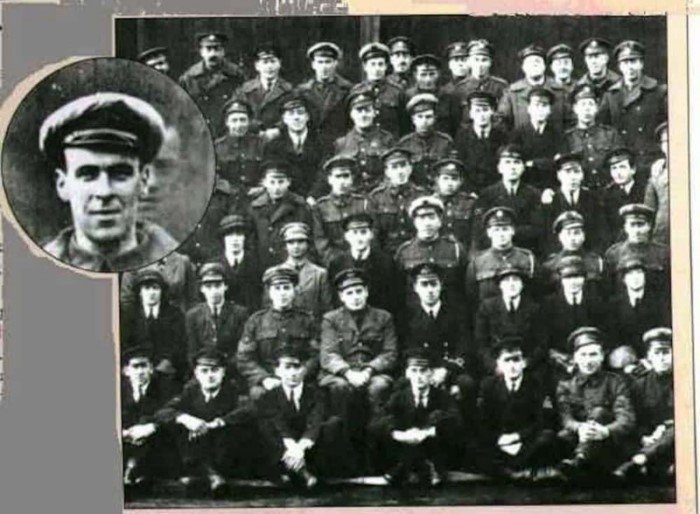 2. Ghost at the wedding

Wedding photographer Neil Sandbah was preparing to shoot the newlyweds at one of the barns of Hertfordshire, England. The master made some trial photographs of the neighborhood and saw on the screen a white figure that was not at the time of shooting. Neal talked to the old residents of the city and they told him that sometimes they see the ghost of a little boy in a white nightgown.

1. The ghost of the White Lady

In 1975, Diana Berthelot, along with her husband Peter and son, came to the Worstedic church in Norfolk, England. There, and this picture was taken, only at the time of shooting on the bench for Diana was empty. Later, a servant of this church told about the ghost. This is the White Lady, who often happens in the church and helps people heal illness. 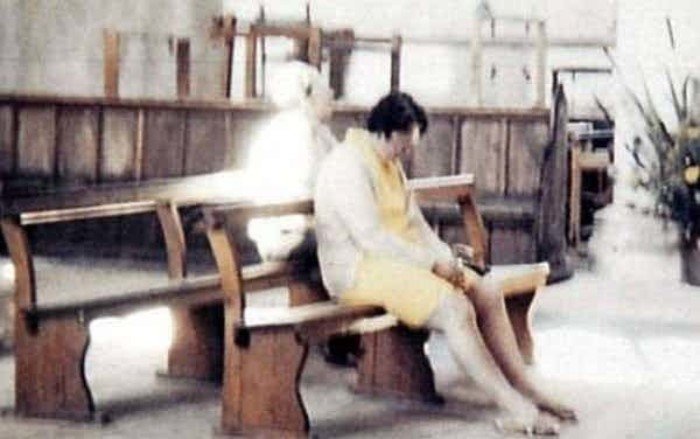