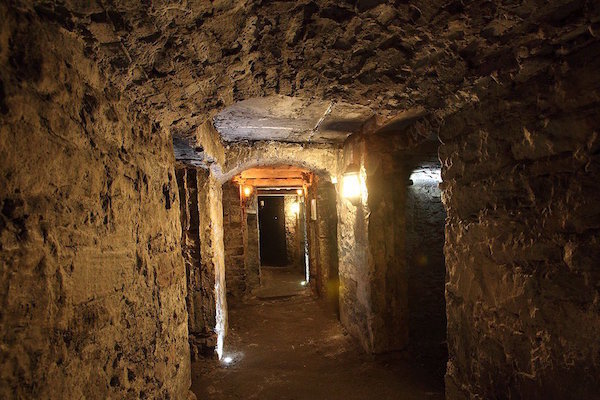 In Edinburgh, Scotland, there is a separate quarter of the old city, which is located in its very center and is called “Mary King’s Dead End”. In this place you feel an oppressive atmosphere that does not bring joy to visit, but this does not prevent him from remaining one of the most popular tourist routes.

The place where plague patients were sent to die

This name was given to this place in honor of the owner of most of the buildings of this quarter, which were at her disposal at the peak of the plague in the 17th century. All the main establishments were located there, respectively, the centers of the most terrible diseases were also in this place.

Then everyone obeyed the law, according to which people in whose families there were sick people should inform their neighbors to prevent the spread of the disease.

The warning was as follows: citizens hung a piece of white cloth outside the window of their apartment. After some time, almost every double-glazed window was decorated with a rag symbol, and an epidemic invaded the whole city.

Having no idea how to prevent the growth of this ailment, the magistrate issued a decree to close all infected in one place, and the bodies of the dead – to take out and burn. Thus, Mary King’s impasse became a kind of infirmary, around which a huge stone wall was erected.

A century after the terrible events of that time, the old facades of the structures were dismantled and a new building of the administration of the municipality was built. In fact, a certain section of the quarter was destroyed to bricks, and the rest is walled up, which became the basis for the new building.

Only in our century, archaeologists uncovered the surviving walled up part, cleared of garbage and remade it into a museum.

Before the tourists a series of underground labyrinths opens with views of the narrow streets, which are more like tunnels and passages. From time to time you can stumble upon the remains of stairs, walled windows and boarded up doors.

After reading the above, it will not be a surprise that in this place there are sometimes ghosts who are mistaken for the souls of people who died a heavy death from the plague.

There is also one house where the ghost of a teenage girl whose name is Annie has been repeatedly seen. When her parents found out that her daughter was suffering from an incurable illness, without thinking twice, she fenced her off from the other children and took her to die in a “closed city.” Annie herself was not informed that she was ill – she was just closed in one of the apartments of the block.

The girl died long and painfully, as a result of which her soul never found peace and continues to wander along the walled streets of Mary King’s impasse.