Stories of eyewitnesses about the ghost of the white parachutist 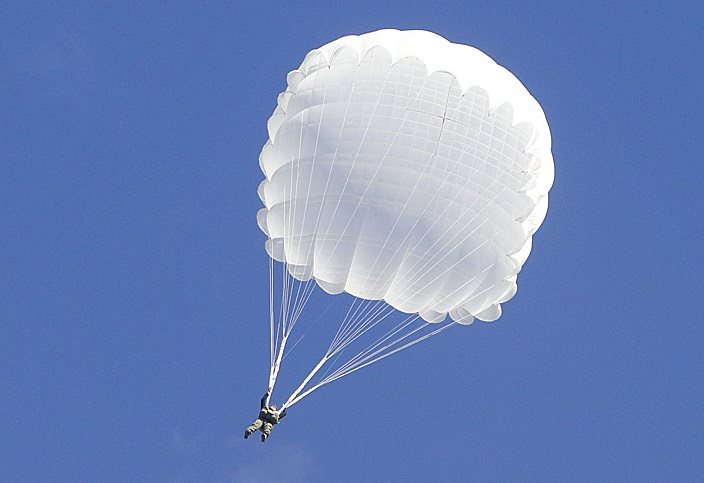 Except the ghosts “registered” in old castles, apartments there are also “wandering” ghosts which are professionally tied to this or that sphere of human activity. Heard a set of stories about the strange parachutist who inexplicably saves people in air, for white clothes the name “white parachutist” was assigned to it.

Is also other names, so, at the Ryazan institute of airborne troops call it “The volatile resident of Ryazan”, but it is about same, there will also tell many stories about miracle intervention of the celestial instructor in disastrous situations.

The journalist Nikolay Cherkashin in the Krasnaya Zvezda newspaper so described the story about a ghost parachutist heard from the aged colonel-paratrooper:
“We jumped about Il-76 in four streams, I got out of the car, one of the last when the majority of my people already extinguished domes on the earth. I fly — everything is all right, mood magnificent. Suddenly I hear shout because of a back: “Leave to the right!”.

Without deliberating, pulled slings and went to the right. And right there by me the fighter with the developed parachute flew by. Delay I second — and it would get into my dome. However, the soldier managed to open the spare wheel and everything was. I turned back to shout “thanks” to the savior.

Meters in hundred saw the parachutist in white overalls. It it is sluggish… rose up! It is rare, but happens when the person gets to a potent upflow. Quickly delivered us on height. I did not even manage to consider his face as it disappeared in height…”

The athlete-parachutist Vasily Maksimovich Krasnov had the experience of meetings with “the white parachutist”:
“We night jumped to Pamir, the most important in mountains — to find more or less convenient platform for a landing. And incurred me in such jungle that literally you will not collect bones. And I can do nothing — lost orientation.

Interior I feel: I will just about be robbed. Suddenly I see: ahead of me someone flies. Also it is so well visible it is white moreover by moonlight. “Give for me!” — shouts.

I pulled slings — and behind it. Thought, someone from ours noticed the platform. And here it brings me to tiny “patch” between stony canines on the one hand and an abyss — with another. I sit down as a fly on a saucer!

And so successfully stony canine covered a dome, as it was not necessary to extinguish, and standing resisted. And my conductor planned in an abyss. Only also saw white top of its parachute. All our landed successfully — nearby. Here also guess who it was?.”

The similar story was told in Kiev by the Honoured Master of Sports of the USSR Vitaly Cherednichenko:
“I went on pobity a record on a free-fall jump. For kilometer to a point of disclosure of a parachute heard a heart-rending cry: “Tear a ring!” Jerked mechanically, involuntarily submitting to team and an instinct of a self-preservation.

Of course, did not break the record, but saved to itself life because the automatic machine of height was faulty. Who shouted? And this most unclear. In a palate, except me was nobody. More precisely, should not have been. But from where took out the parachutist in all white.

I managed to notice it when raised the head to examine the dome. From the earth nobody saw it. And I was just not believed when I reported on what occurred in air…”

In Tsarskoye Selo, in the former Guards barracks, and nowadays Naval engineering institute, cadets seamen told to N. Cherkashin an old uchilishchny legend how in the dead of night it is possible to see on a parade-ground a white figure which, having spread parachute silk on asphalt, knits slings “the infinite loop”.

From where the ghost of the mysterious parachutist in naval institute undertook? In the 1930th years in these ancient yellow housings in Kadetsky Boulevard one of the USSR’s first airborne brigades was formed. Paratroopers lived in Pushkin of that time, and jumps made around the Gatchina airfield.

There was among them fearless and impudent Ivan Volkorez, he was famous for the free-fall jumps — most longer flew to the earth a stone, without developing a parachute, and only several seconds prior to, apparently, inevitable blow tore a ring and, of course, landed very first that in troops was very appreciated.

At those who watched its jumps on the ground took the breath away for horror. But Ivan was везуч. On the edge of the exercise ground there was a thrown church on which belltower the command observation post was placed, and once Ivan Volkorez argued with friends that will develop a parachute at height of this belltower: “As soon as my boots on the top will overtake a cross, so the dome also will be developed. Mark!”

And as Ivan Volkorez did not believe how it befits the Komsomol member, neither in God, nor in the devil, swore at the same time: “That I have more to set foot on land never!” So it also left.

All gasped when at height of a cross the white dome blazed and… went up, uplifting daring far away from the earth. He was gone in a flash!

Generally then it was seen. But only those who were in distress in a palate. Much that “the white parachutist” saved lives: whom will warn about danger, to whom will shout what to do.