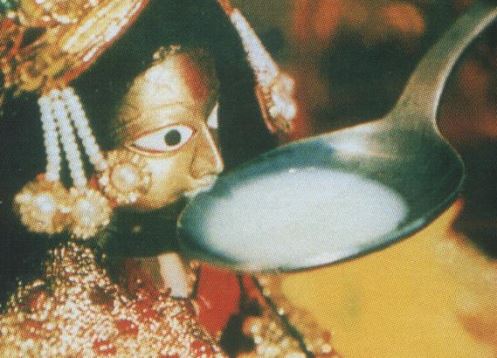 Witness the “Milk Miracle” in 1995 around the world were millions of people. It was taken on thousands of professional and Amateur cameras.

It all started with the fact that on 21 September 1995 at 2 a.m. in one of the temples of Ganesha in new Delhi rang and a mysterious unknown male voice said, “Ganesh wants milk. Please, give him drink!”. The priest just in case he immediately took his bath and offered to the deity the milk in front of him immediately disappeared.

An enthusiastic priest immediately called his friend, who also immediately offered milk to her deity, and it too disappeared. At four in the morning everyone in new Delhi knew that the deity began to drink milk. One resident of Delhi has even gone a package of milk from the fridge, on which stood a statue of Ganesha.

By the middle of the day knew about it already the whole country and half of the Hindu world. In all Hindu temples around the world — in Indonesia, Singapore, Hong Kong, Canada, UK, USA, Burma, Thailand, Kenya, Sri Lanka, in thousands and thousands of temples had the same thing happen: people brought the spoons to the mouth of the deity the milk, and it disappeared right in front of them. The media immediately recorded, where else had seen this miracle.

In India, the hype began. Many companies and shops stopped working; on the Bombay stock exchange stopped trading. The students ran away from school, employees left the offices, the workers threw down their machines; the owners were given a holiday to his servants and with them hastened to the temples. The whole of India stopped: all knocked in temples, to see this miracle for themselves and drink of deity. All were in raptures.

Milk drink made from bronze, marble, silver statues of Krishna, Brahma, Shiva, Ganesha and Durga, Indra, Hanuman – all Indian deities, even statues of some Indian saints and Shiva’s bull Nandi. The milk was gone even if it is brought to the mouth drawn on the calendar of the deity.

The temples lined kilometer queue with cans, bottles, bags. Sentimental and pious woman was dragged to the temple of their unbelieving husbands and told them: “Here, see for yourself, make sure! I always told you our religion is the best, and you did not believe!”.

Statues drank milk regular, shelf stable, homogenized, concentrated. The priests had to limit visitors – a teaspoon per person. Priests sometimes supported people’s hands with spoons if they were shaking from excitement while watching this miracle.

Even in London it was watched by 10 thousand people. In Hong Kong within a few hours the gods did not drink anything — as long as an eight year old girl was not offered milk to the statue of Krishna.

After this all the deities also began to drink milk, which gave them believers. Small in the temple of the silver sculpture of Ganesha for a day on the spoon drank 20 liters (two buckets) of milk.

Only one Birla temple in new Delhi that day was visited by 55,000. The deity within it, drank 125 liters of milk, which disappeared. One day in Delhi was sold all the milk and had ordered an additional 100 tons urgently. And this despite the fact that the price of a liter per day increased from six to 100 rupees.

Indian shops was sold in a day all the images of elephants. Many churches remained open around the clock to accommodate the maximum number of believers.Some skeptics and journalists went to the churches with the intention to expose the fraud, and went to the depths of amazed to see the miracle with my own eyes.

About “the Miracle of milk” I wrote the entire country. Front page and including the largest Newspapers, were published sensational photos and essays with the titles: “To God on dairy road”, “Miracle for the believers and the mystery for atheists”, “Millions fed “miracle of spoons”” “God prefers the milk and rejects Coca-Cola”, “bored Ganesha sweets ladoos, and he’s changing the menu!”,

Last time in India it happened 500 years ago, disappeared when offerings of milk, fruit, sweets, juices…

Religious scholars of Hinduism half-jokingly referred to as the “kitchen religion” because there is a large emphasis on offering God something edible.

Hindus also justify it by the fact that God is a person, and to establish a relationship with the person, the easiest way is to buy him something or make any gift. The gift in the treat important thing – not their material value, but the feeling, the emotion that they carry.

To see and feel the emotions, feelings, desires with the help of the body it is impossible for us. However, desires to have a “smell”, and emotions have a “taste” that God feels and sees his spiritual senses, and that we create within ourselves through communication with Him.

When the food is offered to God, God leaves the material substance from which it is prepared and takes out the feelings, the emotions that it contains and enjoys it. In response he puts into this food the energy of mercy and love for us. Therefore thus consecrated food, and called the Hindus “Prasad” – “food, charged with the grace of God”, the adoption of which greatly elevates the consciousness.

But the materialistic mind sometimes says: “is there a God at all? And if he looks at all of these all of our offerings, he takes them? And in order to demonstrate that He really is, it sometimes takes all the offering not only loyalty and love, but even the material substance in which they are “Packed”.

In connection with this miracle, the religious leaders of Hinduism and said that it was shown to the young generation to strengthen their faith. And at the same time stressed that the incident clearly showed how God and his assistants, the demigods appreciate the milk and, consequently, a cow that gives it. This is a serious occasion to reflect: and will not suffer if modern humanity punishment for cruelty to Pets?

Astrologers say that this is a good sign, and that such miracles happen when this world comes a great Saint. As, for example, 500 years ago in India has emerged the great Saint Sri Caitanya, who is considered an Avatara, an incarnation of Krishna for this age.

Western scientists are skeptics explained the nature of this miracle that, in their opinion, the Indian God made of porous stone that absorbs moisture. And the miracle is easily explained by capillary effect. After it became clear that milk was absorbed as well, and deity, made of metal, and many times in greater amounts than their volume, they speculated about mass hypnosis.

There were even speculation about the “hypnotic gaze”. But since it was captured on multiple cameras in various countries of the world, it turns out that this hypnosis was really massive, planetary scale, and the camcorder also came under the influence of this gas or hypnosis.

There was even a Committee to administer this so-called milk miracle”, which was suspected even a mass conspiracy of the Indians-priests or some religious political parties. However, the work of the “Committee to expose” so nothing was given. As they say, “even if before an unbeliever in alien atheist-scientist drops a flying saucer, it will find a thousand ways to explain myself it’s illusion!”.

However, the “Milk miracle” happened again August 21, 2006 in the State of Uttar Pradesh, in new Delhi, in Northern India. At eight in the evening in the temples of Ganesha, the people again drew attention to the disappearance of the milk, and the news that he was again drinking milk has gone viral at the speed of sound. 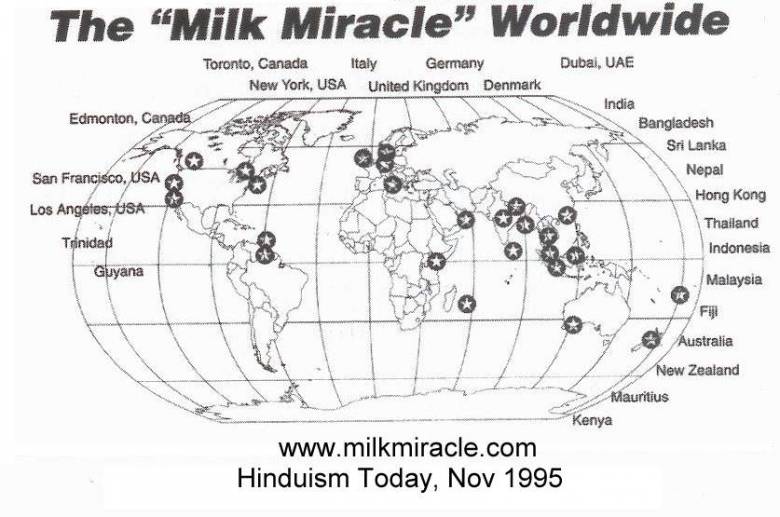 In the temples again rushed the crowd. Ganesh continued to drink milk for three hours, and some even right out of their palms, and at 11 PM, this phenomenon ceased. This news once again rocked the country.

In 2013, one of the researchers “Kosmopoisk”, who has studied the subject of milk drinking Indian statues, came to the following conclusion:

“Indian phenomenon with the statues of the gods and the milk until there is enough solid and unquestionable scientific explanation. However, this does not mean that this miracle may not be a complete background material and physics is not able thoroughly to understand the question about where the milk disappeared from the spoons of believers.

But whatever the conclusion of scientists, it will not weaken the confidence of the Hindus is that they witnessed a genuine miracle. For the rest of the event memorable September day became another Testament to the fact that in the world are the spheres of the unknown, and mysteries of life, therefore, we can expect more surprises”.