The most famous Ghost ships 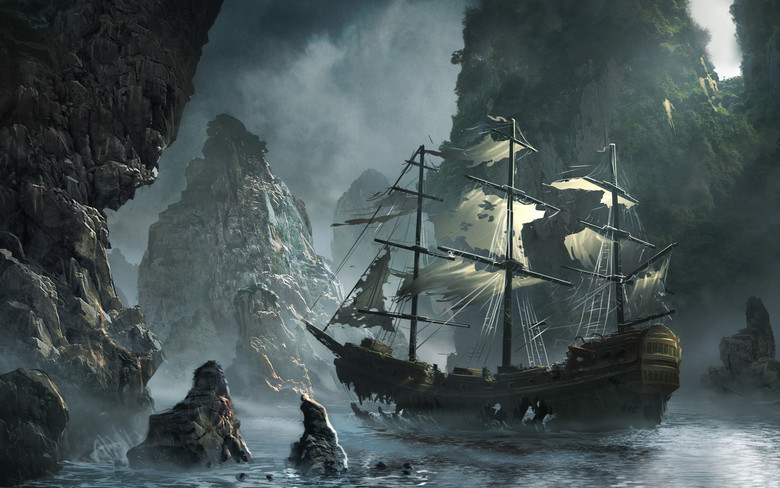 “The flying Dutchman” is a legendary sailing ship, like a Ghost, can’t hit the beach and doomed to sail the sea. Usually people see such a ship from afar, sometimes surrounded by a glowing halo.

According to legend, when the “flying Dutchman” meets another ship, his team is trying to convey on shore the message to people who are no longer alive. In sea superstitions the meeting with the “Flying Dutchman” was considered a bad omen.

The ships that were found in oceans abandoned, dead from unknown causes or no team, also became known as Ghost ship. The most famous and classic of these is surely the Mary Celeste.

In December 1872 the ship was found by captain of brig “Dey grace”. He began to send signals, but the crew of the “Mary Celeste” did not answer them, and the helpless ship bobbed on the waves. The captain and his sailors landed on a mysterious Brigantine, but the ship was empty.

The last entry in the logbook was made in November 1872. It seemed that the team has just left the ship. The ship was damage in the kitchen had food, and in the hold were 1,700 barrels of alcohol. “Mary Celeste” a few days later was taken on a RAID of Gibraltar.

The Admiralty could not understand, where is the team of the Brigantine, the captain of which was a sailor Briggs, more than twenty years vodivshy sailboats. As news of the ship was not, and his crew never showed up, the investigation stopped.

However, in the people news of the mysterious disappearance of the team “Mary Celeste” has spread with incredible speed. People began to wonder what happened with Briggs and his men? Some were inclined to the version that the ship was attacked by pirates, others thought that the problem was in rebellion. But it was all speculation.

As time went on and the mystery of the “Mary Celeste” has gone beyond local, as it began to speak everywhere. It should be noted that with the completion of the investigation has not stopped stories about the mysterious ship. In the Newspapers there were frequent stories about Brigantine, journalists described a variety of versions of disappearance of the team.

So, wrote that the entire crew was killed in an attack by a huge octopus that the ship has outbreak of plague. And in the edition of the Times said that all the passengers on the ship who killed captain Briggs, which was crazy. And the bodies he threw overboard. After that he tried to get on the boat, but it sank along with him. But all these stories were just fabrications and assumptions.

From time to time charlatans came in the wording and gave himself for surviving sailors of the “Mary Celeste”. They received a fee for the “real” history and then disappeared. After several cases, the police were already on the alert. In 1884, the London almanac “Cornhill” was written Rebecka memories of Jepson, a sailor who was on that ill-fated ship. However, it later turned out that the author of these “memories” was Arthur Conan Doyle.

Quite a lot of stray ships found in the Maritime areas far from shipping lanes and rarely visited the merchant ships. From time to time “the Flying Dutchman” remind myself. They’ve been washed down to the coastal rocks, they are thrown by the wind on the cliffs or reefs. It happens that “the Dutch” that do not bear at night the navigation lights, cause collisions with oncoming vessels, with sometimes serious consequences.

In 1971 under mysterious circumstances was abandoned Portuguese transport “Angos”. It happened at the Eastern coast of Africa. Transport “Angos” gross tonnage 1684 gross tons and a payload of 1236 tons, came out on April 23, 1971 from the port of Nacala (Mozambique) the Mozambican port of Porto Amelia.

Three days later “Angus” was discovered Panamanian tanker “Esso Port Dickson”. The transport was drifting without a crew, ten miles from the shore. The latter-day “Flying Dutchman” was taken in tow and brought into port. The inspection showed that the ship suffered a collision. This was evidenced received serious damage.

The bridge had obvious traces of a recent fire. The experts found that it could be the result of what happened here a small explosion. However, to explain the disappearance of the 24-man team and one passenger “Angola” and failed.

In October 1913, in one of the bays of the archipelago of Tierra del Fuego, the storm brought the schooner “Marlboro”. The mate and several members of his team climbed aboard and were shocked by the horrifying sight: all around the sailboat was scattered with dead, dried up like mummies, the bodies of the crew members.

The mast of the sailboat was completely intact, and the whole boat was covered in mold. In the hold happening is the same everywhere, dead crew members, dry as a mummy.

The investigation was set unbelievable fact: three-masted sailing ship departed the port of Littleton in early January 1890, bound for Scotland, to his home port of Glasgow, but for some reason never came to port.

But what happened with the crew of a sailboat? Really calm stripped his sails to the wind and forced to drift aimlessly until, until he was exhausted all supplies of drinking water? How could it happen that a ship with a dead crew crashed on the reefs for twenty-four years of graphomania?

In June 1947 (according to other sources — in early February, 1948) the British and Dutch listening stations, as well as two American ships in the Strait of Malacca received a distress call read: “Captain and all officers dead lying in the cockpit and on the bridge. Maybe the whole team is dead.” This message was followed by indecipherable Morse code and a short phrase: “I die.”

More signals have been received, but the sending of the message failed to determine a method of triangulation, and it immediately went to one of the above mentioned American ships.

When the ship was found, it turned out that his entire team is dead, including even the dog. On the dead bodies there was found no apparent injuries, though from their expressions it was obvious they died in horror and severe pain.

The ship itself was not damaged, but the members of the rescue team was marked by unusual cold in the depths of the hold. Shortly after the start of the inspection of the hold began to receive suspicious the smoke, rescuers had to hastily return to your ship.

Some time after this “Orang Medan” exploded and sank, which made further investigation of the incident is impossible.

On the morning of July 1850, the residents of the village of Easton’s beach on the shores of the state Rhode island was surprised to see that from the sea under full sail to the shore is a sailing ship. In shallow water it stopped.

When people boarded, they found that the galley stove is boiling coffee in the cabin on the table placed plates. But the only living creature on Board was trembling dog while hiding in the corner of one of the cabins. No one on the ship was not.

Cargo, navigational instruments, maps, charts and ship’s papers were in place. The last entry in the logbook, reported: “Went on the beam Brenton reef” (this reef is located just a few miles from Easton’s Beach).

It was known that “Cyberg” sailed with cargo of coffee and wood from the island of Honduras. However, the thorough investigation conducted by the Americans, did not disclose the reasons for the disappearance of a sailboat with its crew.

In September of 1894 in the Indian ocean aboard the German steamer “Pickhuben” noticed a three-masted barque “by ESS ESS HART”. His mast was waving a distress signal. When German sailors landed on the deck of a sailboat, I saw that all 38 of the crew dead and the captain has gone mad.

In October, 1908, near one of the major Mexican ports found waterlogged frigate, with a strong roll to port. Stenge of sailboat masts were broken, the name to install proved impossible, the team was absent.

No storms or hurricanes in this area of the ocean at this time were noted. The search proved fruitless, and the reasons for the disappearance of the crew remained unclear, although it was put forward many hypotheses.

In February 1953, the sailors of the British ship “Renie”, being two hundred miles from the Nicobar Islands, found in the ocean-a small cargo ship “Holco”. The ship was damaged, mast broken.

Although the lifeboats and were in their places, the team was absent. In the hold was a cargo of rice in bins — full fuel and water. Where did the five members of the crew, still remains a mystery.

4 Dec 1928 Danish training sailing ship “Kobenhavn” out of Buenos Aires to continue the circumnavigation. On Board was the crew and 80 pupils of the naval school. A week later, when the “Kobenhavn” has managed to pass about 400 miles, from the Board was received a radio message.

Command reported that the voyage is successful and that the ship all is well. The fate of the sailboat and were on it people remains a mystery. In its home port of Copenhagen, the ship has not arrived.

Claim that it was subsequently met many times in various parts of the Atlantic. Supposedly the sailboat was under full sail, but it was not.

To date it remains a mystery story of the ship “Goita”. Presumed dead, the ship was discovered in the ocean. It floated without crew and passengers. “Goito” called “Mary Celeste”, but if the events that took place on the “Mary Celeste”, took place in the nineteenth century, the disappearance of people from the Board “Gouty” refers to the second half of the twentieth century.

“Goita” had excellent sea keeping qualities. 3 Oct 1955 the ship under the command of captain Miller, an experienced and knowledgeable sailor, left the port of Apia on Upolu island (Western Samoa) and headed for the archipelago of Tokelau.

At the port of destination it has not arrived. Were organized searches. Rescue ships, helicopters and planes explored the vast waters of the ocean. However, all efforts were in vain. The ship and the 25 people on Board, was enlisted in the list of missing persons.

It took more than a month, and November 10, “Ceuta” was accidentally discovered in 187 miles North of the Fiji Islands. The ship floated in a waterlogged condition and was a great roll. No people, no cargo on it was not.