The phenomenon of “Electric women” 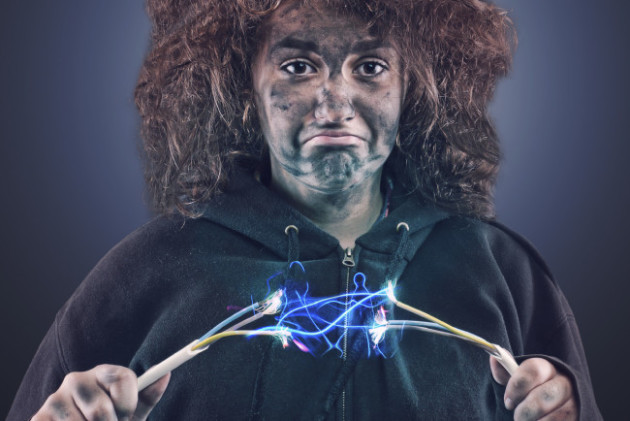 The famous American writer Stephen king one of his books dedicated to the girl who could cause a fire, looking at any object. At the same time, notes the writer, it had to be brought to a state of extreme stress — like to be angry or frightened.

Fiction, probably, did not think and did not guess that such a phenomenon actually exists. However, in a slightly different way…

They say that this case occurred in 2001 in the shop of one of the Petersburg defense enterprise. Women of the morning shift, usually leaving all their clothes in the lockers, took a shower and changed into a cotton factory form.

Having sealed the platform, they sat on the chairs with ground seats and turned on the light desktops. And suddenly there was a alarm is usually silent indicator of the electrostatic field.

Involuntarily all eyes turned to the new girl to change. She was approached by the foreman, were asked to stand and touch the contact of the test device. It is, on the body of the new girl was a potential of several thousand volts. One touch of her hand to the Board, and expensive device would have been ruined.

Later, in conversation with the factory psychologist, the woman told the following story. It turned out that she had worked in this shop a few years ago. Then married officer, had a daughter and left a well-paying job as a teacher in kindergarten, to be closer to your child. But then tragedy struck — her husband died in Chechnya, the salaries of teachers wasn’t enough, she decided to return to the same place.

Its unusual ability to direct the electrostatic field, emerged as one of the consequences of the shock for the loss of her husband, a woman learned only in the shop. Before anything similar did not notice for themselves.

Initially, the factory, the experts decided that, maybe, the discharge is induced, that is formed, for example, when combing the hair or by friction during walking sneakers on the linoleum floor. However, subsequent checks showed that the field is stable and dramatically increases your potential woman is excited. She had to find another job.

This case is pretty rare, but not unique, said investigating his candidate of physical and mathematical Sciences Valentin Acolytes. Something similar is already repeatedly described as special medical and popular literature.

One of the first reliably recorded messages of this kind refers to 1895. The speech then went on about American Danny Moran from Missouri. From childhood she was distinguished by nervousness. This phenomenon began to manifest itself in girls from the age of 14. From her fingertips flew a long spark when it touched metal objects. And her favorite cat in the horror hiding.

In 1895 Dr. Artcraft wished to personally verify the rumors about the girl — “the Leyden jar”. Not heeding the warning of the parents, distrustful of the doctor tried to take Danny’s hands, receiving a strong electric shock, lost consciousness. When he awoke, the doctor did not want to continue dangerous experiments, but described the incredible case in the medical journal.

Prior to that, in the scientific literature the US there had been only one similar case of a resident of Ontario, eighteen year old Caroline Claire. After a serious illness she suddenly acquired the ability to generate powerful electrical charges, beating with the feet of anyone who ever touched it, including a potential suitor. But, fortunately, this unpleasant phenomenon soon disappeared.

In the early twentieth century Dr. Robin Bitche were invited to investigate a strange arson at a factory in Ohio.

One was recorded eight fires in just one day. The culprit of them was a woman, newly arrived to work.

And it was not a malicious arsonist. On her body like an electric eel, there were periodic potential of more than 30 thousand volts at a skin resistance of about 5 thousand Ohm/m. in the woman’s hand began to smolder and light up the dry shavings and paper.

A similar case occurred in the 80-ies in the paint shop of one of the Leningrad factories. The fires started when the shop moved to a new, more volatile imported solvent. The concrete culprit of fires was one of the women-painters. She needed to take up a non-grounded spray gun like from it like a flamethrower, jet began to beat the flames. Moreover, the potential of the body workers increased sharply after the woman argued with anyone from work colleagues, the master or the household.

A peculiar record was set approximately in the same years housewife from Holland Pauline Show. One touch Pauline made TVs, refrigerators, and even irons. And the TV she managed to incapacitate even at a distance — not only at home but also in store. Once she was even arrested because it is disabled in the supermarket the latest electronic cash.

The phenomenon has interested scientists revealed that the potential of her body reached 200 thousand volts. Only slightly and briefly decreased after taking a shower. The woman immediately prohibited to drive a car near a gas station. Otherwise, picking up the gas nozzle, it could easily blow up the gas station.

The already mentioned Robin Bitche in the study of similar cases established that contribute to the emergence of the phenomenon, also stress may be a special type of dry skin. And these “lucky” have one or two a hundred thousand normal people. The vast majority of them women.

The final study of the phenomenon is far from over. But what is already known, suggests the following. Most likely, this phenomenon has the same nature as the accumulation of electrostatic fields stingrays, eels and other “electrical” beings.

However, if those same rays as the nature has created for the accumulation of electricity in special organs, then organisms “electric people” themselves are capacitors.

Having personal troubles, such people are a huge danger to others, e.g. in mines, refineries and transport, not to mention the losses they bring, disabling expensive electronic equipment.

To reduce the risk of injury to surrounding people and objects can be put on before going, say, to the supermarket, rubber household gloves. Then, at least, it is hoped to hold for some time, the charge in itself. And then specifically to defuse his house by touching, for example, the lightning rod.

The famous designer of aircraft engines, academician A. A. Mikulin and generally worked zazemlenie special wiring. Thus, explained the designer, he maintained in his body, the minimum electric potential that has a positive impact on his thinking and health. This the reason or any other, but lived academician 90 years, to a ripe old age while maintaining high efficiency.