The phenomenon of “heavenly forests”

The parallel world can manifest itself differently on Earth. Things and people disappear to return elsewhere or not to return at all. The “windows” open in the sky, demonstrating a different reality. But the complexity of the universe is best shown by the phenomenon of “heavenly forests”.

Provincial America is monotonous and dull. Something to stand out among the neighbors here is not accepted. Local authorities can order residents to paint roofs in the same color or put flagpoles of a certain height. Perhaps that’s why the Forest Avenue street in Caldwell, New Jersey seemed boring and monotonous, and built up by neat two-story houses.

In surviving to this day house number 85 lived retired journalist AP. Smith (the story did not preserve his full name) with his wife. Mr. Smith used to wake up early and usually met the dawn, sitting on the porch.

On August 2, 1970, Smith noticed that something was shining in the sky. The rising sun lit up something resembling a tightly taut silvery thread. A former journalist called his wife and made sure that he did not seem to. Soon, neighbors appeared on the street, who also saw the thread, tried to understand what it was holding, but did not find any supports.

When the number of onlookers in the streets became significant, the police decided to deal with the thread. The patrol car drove along it, but soon the thread rose so high that it was out of sight. Twenty-fold binoculars were useless.

The police decided to find the second end of the thread, going to the ground at an angle over Hillside Avenue. The trail was soon lost: it seemed that she simply dissolved on the background of the blue sky. Knowing the direction and angle of the slope, the officers calculated the place where the mysterious thread was to reach the ground, but nothing was found there. 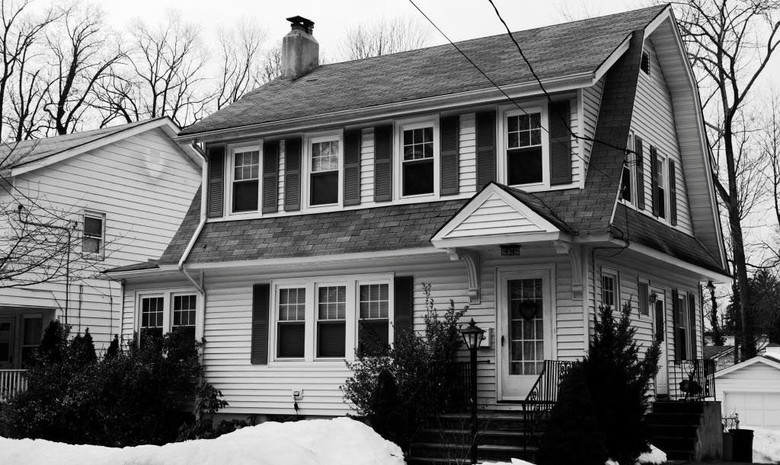 The local newspaper Progress reported only on August 6 – in a city with a population of 8,500 people there is not that much news to produce a daily newspaper.

The clip from the newspaper fell into the hands of psychiatrist Berthold Schwartz, who worked with people who came into contact with UFOs. He came to the city and saw that the thread was still hanging in the sky at an altitude of about 25 meters.

Schwartz wanted to invite firefighters with a sliding ladder from a nearby city (there were no long ladders in the low-rise Caldwell), but the police found an attempt to get to the thread too risky. Schwartz left Smith a business card and asked to call if there were any news.

I had to wait long. The thread hung in one place throughout August, despite thunderstorms and a gusty wind.

On the afternoon of August 31, 1970, Mrs. Smith heard a loud crash. The house at that literally shuddered. From the second floor window, a fan broke. Looking out, the woman saw that the thread was falling, flying into tangles and spirals on the fly. Near it, it turned out to be greenish and stiff to the touch, like bristles on a plastic mop. The woman cut a piece for Dr. Schwartz and called the police.

Arriving at 15:30 the police were surprised to see a lot of tangles, in which the thread rolled, in the courtyard of the Smiths. At the same time, the end of the thread hung from the sky. The police loaded the finds into the car and began to pull at the end, leaving in the sky. To everyone’s surprise, the thread did not end.

It stretched from somewhere from the sky, meter by meter, spreading the earth with new coils. Finally, the thread from the whiff of wind clung to the top of the tree. The officer jerked too hard and tore it high above the ground.

Berthold Schwarz sent a sample sent by Mrs. Smith to DuPont. Chemists responded that the chemical composition of the thread resembles an ordinary fishing line. But not a single plant producing a fishing line has identified its products in samples from New Jersey. Dr. Vargas, a chemist at the University of Rhode Island, confirmed the findings of his colleagues from DuPont.

The Caldwell line was hollow, resembling a narrow tube along its entire length. Vargas for one of the analyzes put the sample in a vacuum and, taking it out, saw that the inner cavity was filled with a solid substance. Its composition could not be determined.

Knowing the diameter of the line, its density and strength, the scientists made simple calculations and made sure that the events in Caldwell violated the laws of physics. Such a fishing line could not stretch straight for several kilometers without support or break. It was supported in the tense state by some unknown force. 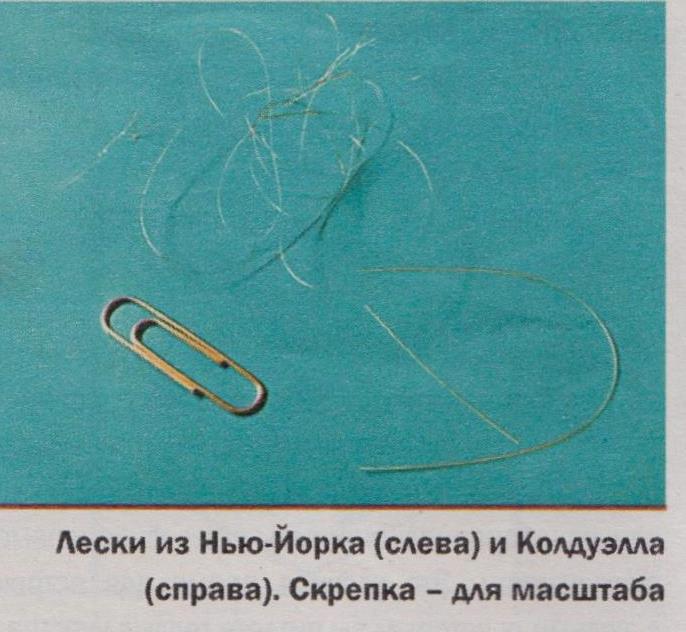 After the fall of the line, the townspeople began to peer closely into the sky. In less than two weeks, people saw a second fishing line running from nowhere to nowhere, over an open city swimming pool. After hanging about a month, she fell among the deck chairs, standing by the pool.

Rescuers, on duty at the pool, called for the help of four guys to pull it together from the sky. An hour passed, but the line did not end. The guys rolled a barrel of gasoline in the volume of 210 liters to fold the prey, and filled it to the brim. Then the fishing line broke off, hitting the power line.

Soon another scaffold appeared in the sky. It hung quite low, and the townspeople decided not to wait for the fall of the thread. They brought the fishing rod and started to throw it up. Finally, one of the shots reached the goal. Leska resisted their efforts, but still managed to break it. When the residents walked along one of the ends, they were amazed. Leska came out of nowhere.

In the winter of 1970, experts from the Society for the Study of the Unknown, founded by the famous zoologist Ivan Sanderson, arrived in Caldwell. By that time, the townspeople had discovered six scaffolding in the sky, tightly stretched at angles of 30 to 50 degrees. As in the previous cases, they stretched from nowhere and went so high that they were lost from view). The police noted their position on the map, but no regularities could be identified.

The researchers sent an official request to the US Air Force, asking if they knew anything about the phenomenon. The answer, signed by Colonel William T. Coleman of the Public Relations Department, said: “For financial reasons, we can not conduct a scientific analysis of the samples you submitted.”

The received note alerted Sanderson. He suspected that the military knew more about the phenomenon than they wanted to show.

Discussing with the reporters the events in Caldwell, Ivan Sanderson noted that one of the journalists is too excited. Answering his question, the girl told a secret that she saw a line over her house in New York and thought that someone had stretched it between the skyscrapers. On March 21, 1971, the fishing line broke off, one of its ends became entangled in the fire escape. The second recently fell not far from her house.

Ivan asked the girl to get samples of wood. Under the microscope, they looked the same as the specimens from Caldwell, but were noticeably thinner.

Another line was found stretched over Elberton, Georgia. The first to notice it was a certain Hut Wallace and called the familiar journalist Herbert Wilcox.

“When I reached Wallace, the line was visible in the sky, shining in the light of the rising sun and stretching as far as the eye could see,” Wilcox said. “At first I suspected that it was a fishing line from a kite, but where was the snake itself?”

In the afternoon Eddie Boswell, the son-in-law of Khata, climbed onto the roof and managed to hook a mysterious thread with a hook with a hook. He dragged it with whole meters, but he did not see what it was fastened to. The thread consisted of two types of material. The one that came from the west consisted of a brilliant white substance. The one that came from the east consisted of a thin solid green material resembling a fishing line. These and other materials were torn with great difficulty.

Ivan Sanderson did not have time to finish the investigation into the case of “heavenly forests”. February 19, 1973 he was no more. The Society for the Study of the Unknowable has not disintegrated, but its members have lost interest in the phenomenon. They simply file new data in the dossier without trying to study them.

In 1975 the line was formed over Linwood, North Carolina. Local resident Wynne Snyder saw it already torn and lying on the ground. The Snyder family dragged it for an hour. When a pile of fishing lines began to reach the waist, puzzled Wynn called the police. The officer on duty, taking his call for a joke, said:

“Call me back when you snatch a little green man from the sky.”

After that, Wine’s father decided that they were enough, and cut the fishing line.

In exactly the same position was the auto mechanic John Wright of Greensburg, Ohio. In September 1978, he saw a line caught on a bush in the backyard. Wright began to clean it and saw that one of its ends goes to the sky. With the help of neighbors, he stretched from somewhere 300 meters of fishing line, wound it on a cable reel. Then the fishing line broke off and swam into the heavens, lost sight of.

The fact that fishing lines did not appear due to military experiments proved the search in the archives. The Australian newspaper Brisbane Courier on June 24, 1925 described the same phenomenon. Leskov hovered over the sea two miles from the city of Darwin. An eyewitness called them “long strands of cobweb”, because he had never seen nylon lines. Nylon was invented 10 years later and patented in 1937.

The researchers of the unknown know that the fishing lines leave the parallel world and go into it or into another world, passing through our reality. While they are intact, they are subject to the laws of physics of neighboring worlds.

As soon as the lines are cut off, both ends fully obey our physical laws. The fact that people did not pull the lines to the end, saved them from unpleasant surprises. Who knows what “fish” could hang on that in the other world is replaced by a hook!