The phenomenon of “Wandering graves” 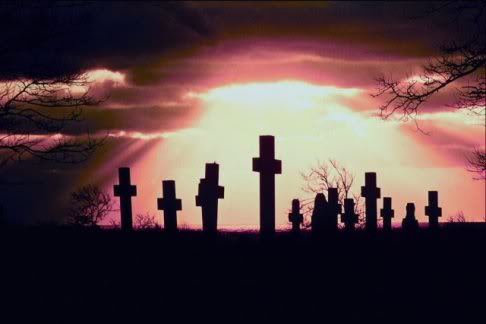 People went to the cemetery to visit someone from deceased loved ones – and suddenly discovered that the grave had disappeared. And later found her in another place. Such cases are already for several centuries. And still no one can explain why the grave sometimes “wander” from place to place…

In the XV century in Linz (Austria) in the archival records of the Church of St. Thomas registered a case, when a city cemetery disappeared grave burgher of Steinberga. It was later discovered in another part of the cemetery, which caused a violent reaction superstitious inhabitants of the city.

The townspeople decided that poor Steinberg when life was involved in witchcraft, black magic, now his ashes, and cannot find peace. The grave in the presence of huge tops opened, the remains pulled from the grave and solemnly burned in front of a huge crowd, and a pit of ashes threw stones and set on top of the cross from aspen – so in those days there were dead people who were suspected of witchcraft…

In 1627 in the Spanish city of Cuenca mysteriously moved the tomb of Pedro ASUNTOS, who died many years ago. For this reason the Inquisition started the investigation, but the perpetrators have not been identified… Found only that the transfer of graves occurred together with the soil, which was rotten coffin.

In 40-ies of the XVIII century near the German city of Ravensburg on the river for two shepherd, overtaking the herd, came upon a tomb with the headstone. Before that, they walked past many times, but no graves in this place and there was no trace. On the stone was carved the inscription: “Here lies Christina Bauer, parishioner of the Church of Ravensburg”.

The shepherds immediately went to a priest of the local Church. He stood by the tomb, was surprised: it turned out he knew Christine Bauer as one of the most zealous of the Church. She was buried in a conspicuous place of the Church cemetery for their large monetary contributions to the Church Treasury.

The priest and the shepherds came to the cemetery, but there is on the site of the grave Christina Bauer found completely empty and smooth piece of land! After some time, when many witnesses were excavated in both places, and the dust Bauer, contrary to common sense, not found in the cemetery, and the coffin under the headstone on the river!

The priest sprinkled the decayed coffin and the remains with Holy water and declared that for some reason God wills, and ordered not to touch the remains, let them lie there, where they were transferred.

Superstitious locals since tried to work around the grave side, considering Christina a witch. During the First world war in the tomb was hit by a shell and turn the grave. Christians Bauer clearly was not to wait for peace in the next world!

In 1895, the United States inexplicably moved at six hundred meters with a deeper grave digger David Lowry, who died over thirty years ago.

Stunningly strange story happened in the fall of 1928, the year sir Arthur Haslem was in transit in the small Scottish town Penispill. In the local cemetery almost seventy years ago, was buried the brother of his grandfather, sir Roger Haslem.

In his youth Roger picked a quarrel with his father, fell into disgrace, was disinherited and expelled from the house. The young firebrand very long to wander the world until she found solace in poverty and freedom at the local Glenville cemetery.

Over time, hasimov has become a tradition to visit his grave, and the last time Arthur was here for at least five years ago. However, he kept the location of the grave of Roger, he remembered, and a nearby gravestone with a carved in granite angel.

Going to the cemetery, he immediately turned right and walked down the envelope cemetery track. Grave Roger had to be at the very end, near the fence. But it was not there!

The site, which was once the tomb was a flat, overgrown place. Arthur could have sworn that his memory had not failed. Here is a gravestone with the angel, and here, two feet away, was the grave of Roger, and he perfectly remembered!

The guard absolutely could not think about the disappeared graves, and puzzled sir Arthur turned to the municipality. The only thing he could help is to find the old layout of graves.

The scheme has confirmed that sir Arthur was not mistaken, and sought where necessary. Someone remembered about the old cemetery watchman Peter Ferguson. The old man had found, and he recalled that on several occasions the tomb of sir Roger caught his eye, and the last time it was four years ago.

He went with Arthur in the cemetery, wandered around the gravestones with the angel and discouraged spread his hands a grave was here, but where did it go, did the Defiler of graves it was destroyed?

However, the old man still found the grave of Roger: it was a totally different place, a few hundred meters from the place where Arthur visited her a half dozen years ago. Of course, this was the same grave: a small earthen hill, vertical slab of dark granite in the form of a Maltese cross.

But how could she get here? Arthur never doubted that the coffin, buried two meters into the ground, remained at the old place, here he only had the stove, poured to disguise the mound. But for what purpose? And anyway, who would want to do such a senseless and blasphemous?

Arthur telegraphed to London his aunt, lady beryl, which, he knew, several times after he visited Glenville cemetery. A few days later came the lady herself and publicly stated that the gravestone moved.

Arthur was adamant that he only had tomb, and the tomb was left in the ground. To prove this, he hired the diggers and told them to dig on the site of the missing grave. Was dug a deep pit, but no trace of a coffin in it was not!

Sir Arthur and lady beryl was completely puzzled. Had to assume that the grave Roger on the Scottish cemetery was originally a fiction that Roger was never buried here, and that his descendants and relatives laid flowers and ever actually empty space.

Intrigued by sir Arthur decided to continue the experiment and ordered the diggers to dig and another grave, although he was convinced that the pit will also be empty.

However, at a depth of five feet shovel digger suddenly hit the lid of the rotted coffin and broke it! Very carefully freed from the land of the remains of what was once an oak coffin and found a skeleton with tufts of dry clothes!

Present at the excavations lady beryl demanded to see the fingers of the hands. According to family legend, sir Roger, without removing, wore a ring from Indian silver with gold monograms R and H. Sir Arthur, sure that the burial is irrelevant to the ancestor personally went down into the pit.

On the ring finger dangled the same ring, which is so carefully described lady beryl!

Doubts have disappeared – they dug a grave Roger Haslem. Besides the cemetery, the diggers swore that there can be no question about the fact that someone, not to mention themselves, have dug the coffin from the old grave and moved it to the new one.

The burial of Roger, as confirmed by the experts, were here always (!), the wreckage of the coffin and the bones of the skeleton themselves so firmly “italici” in the ground, which is practically not separated from the soil.

Sir Arthur had to agree with that fact. The assumption that someone needed to move to a new place not only a tomb stone cross, but rather bulky piece of soil together with the coffin and the remains of sir Roger, was absolutely ridiculous. In addition, such work could not be done, leaving little or no trace.

The story of the grave Roger Haslem wrote a lot in his time all the Newspapers of great Britain, with the police, but none with any plausible version was not nominated.

But a recent case occurred in a farming village Foley Creek, Western Kansas, USA. It was in late 1989, Early in the morning, leaving the house to check the cattle farmer Joe Bernie right in the middle of the yard found a grave mound with a crooked cracked stone tombstone!

Cried from fear, sixty-year-old herdsman rushed into the house and called the police. The grave was examined. The inscription on the slab is all cracked, faded and could not read.

Bad joke was excluded, because the next farm was at a distance of five kilometers, farm, Bernie was surrounded by a solid fence, and the gate was carefully locked up by internal locks.

When the workers pulled out the stove and began to pluck the mound, at a depth of about half a meter stumbled upon a rotting coffin with the remains of a human skeleton, buried in the ground.

Only with an excavator managed carefully remove the coffin with the bones and transport them a few kilometers to the steppe, where he was buried in a deep pit.

Whose were the remains, as they get to the farm, located far from the city and its cemetery, the researchers could not explain, although the photo report about this mysterious incident has bypassed many mass media of America.

However, as has become clear, Joe Bernie was not the first person who was perplexed and almost went crazy, faced with such phenomena.

If we assume that the transfer burial graves is unknown jokers or intruders, how they managed to remain unnoticed? Because this work requires considerable time and effort! There is a different explanation – magic. They say, “escape” graves was in the hands of wizards and witches, and the dark and unknown entity.

However, what drives to a standstill civilized people, it is not a secret for some African tribes, Polynesian natives and other pagans. In VI – V centuries BC the members of the religious sect of the Jains believed in a spontaneous move graves terrible curse, to escape from which was only possible by self-immolation…

The priests in the Pacific Islands and Polynesia, there is still a tradition, immediately after the funeral to pour the grave from all sides wood juice “magic” wood or impose its border of shells or red clay. This is done, according to them, to the grave “not gone”.

The same is for the priests Negro voodoo on the Islands of Samoa and Haiti.

On the Islands Tongo is the tribe which in the same grave and bury the only two people. If the grave of one dead person can “get away”, with two not: if the soul of one of them will want to find another place, another soul will oppose.

Meanwhile, members of the medieval Islamic society called “brothers of purity” used the land with such graves in occult rituals. They believed that this land has a mystical and healing properties.

Spanish Conquistador Pedro de Alvarado describes the curious case of moving the graves of the Inca priests. He reports that the remains of the priests are buried on the ocean coast, and then they “migrated” from there to the high basaltic plateau located two and a half miles from this place. Alvarado saw with my own eyes on a plateau six graves, “displaced” in this way.

Local Indians believed that this is facilitated by the gods…

Modern scientists are silent. Who, in their opinion, contributes to the transfer of the graves, they don’t know.