The secrets of playing the deck: how to protect yourself from black magic cards 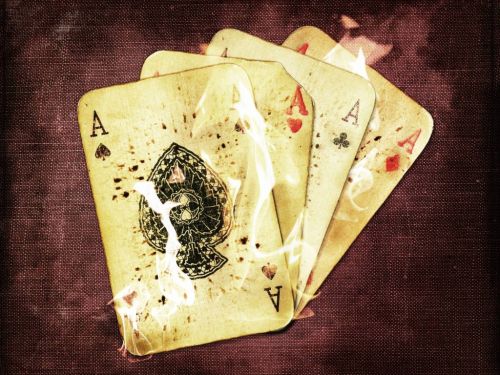 Cards require careful handling. As says an old legend, the first satin a deck invented by the devil himself, and the Lord does not forgive the familiarity. Never play with the unknown

In the night, when the Messiah suffered a torment, drunken guards was fun dice. Suddenly approached by a stranger, slightly cling on one leg. After watching the skirmish players, he laughed and said that bone – infantile fun. He knows the game more interesting! The Legionnaires stared at the planks with the strange markings – some rhombuses, hearts, crosses, spearhead. The night visitor lucidly explained the rules in detail instructed about the suits and the rank of the cards. The fun lasted all night, and next morning found dead Legionnaires. They did not know that unknowingly created the greatest blasphemy, defiling the four shrines. Just an overnight guest, under the guise of which was hiding the enemy of the human race, not tell them what’s under the hearts suit is hiding a long-suffering Heart of the Savior. Cross the suit symbolizes the instrument of execution, diamonds are the nails that were nailed to the planks of the hands and feet of Christ, and the peak represents the tip of the spear which the centurion Longinus ended the suffering of the Lord. So the legend goes.

The official version of the origin of cards in a hurry to assure that no supernatural forces to the invention of the cards is not involved, but the believers still try to avoid cards through which Satan sows the temptation, confusion and destruction, and sometimes is himself in the image of the Joker, heralding the player collapse and madness.

The first written mention of the cards was dated 1379 year. Apparently, the new fun brought to Europe by the crusaders, who had to join the fun of the Arabs. Those, in turn, were inspired by the ritual of the Tarot cards that were used by the Egyptian priests. Anyway, the aura of the sacred still prevails over the cards, creating thousands of rituals and signs, designed to protect the player from contact with the subtle world.

A sure way to court disaster is to handle a deck without proper respect: to deal cards with his left hand, lay the deck on the table, not covered with a cloth, pick up cards from the table before handing out, to sit at the gaming table, legs crossed, and twist goat leg from the old map. To attract a big win bet recommended for money borrowed, under any pretext, to entice the lender into the hall. And if the cards fall from his hands, the game is better to postpone till the best times: good luck is still to be seen.

The phantom menace: how to store maps

The practitioners of magic and divination, about which you can learn http://proritsanie.ru/, warn that the cards transmit the vibrations of the lower astral and can attract to our world the different malicious entities. In 30-ies of the last century with the Kirlian camera that can recognize essential fields, managed to capture on film the Ghost monsters, as climbing in the interior the gambling house. Penetrating into the biofield of the players, the inhabitants of demon worlds inspire intoxicating sense of excitement under which people commit rash acts, crimes and suicide.

To prevent astral aggression is necessary to localize the source of the otherworldly vibrations. The cards are best stored in a dark wooden box, pre-wrapped in red cloth. People are particularly vulnerable during sleep, so the casket with a secret” should not be in the bedroom.

Heavy energy cards can harm people with weakened energy – children, pregnant women, elderly, sickly and mentally unstable people. It is very dangerous to use a playing deck for divination, and fortune – for the game. In the best case, the information proves to be inaccurate, and the worst you can incur serious anger the spirits, through which a fortuneteller receives instruction. So follow the rules of the game and be happy in any case!