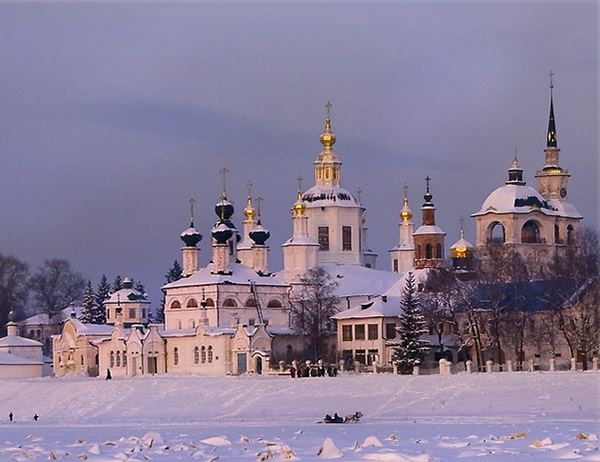 This ancient Russian city was first mentioned in the annals of 1207. It is located in the extreme north-east of the Vologda region. A number of surprising events that took place in these parts, allows us to speak of them as an abnormal place.

There are curious old documents called “Tables of the most important incidents in the Empire, composed of reports and transferred to the III Department of His Imperial Majesty’s Office.” They were compiled monthly for the king. Excerpts from these “Tables …” were published in the journal.

So, in the room for 1844 was posted a note called “An Unusual Aerial Meteor”, which is directly relevant to the subject of our discussion, and therefore it is advisable to bring it almost entirely.

“On Saturday, January 30 of this year, quite a lot of residents of the city of Ustyug of the Vologda province were alarmed in houses and on the roads caused by the phenomenon of an extraordinary brilliant meteor. According to the witnesses, it appears that this phenomenon appeared in Ustyug at the beginning of the last quarter of 7 o’clock in the afternoon at 8 ° in Reaumur and the weather is almost windless.

Suddenly, in the southeast, the gaze was struck by the bright rays in an extraordinary array of interlacing stars, which seemed to descend from the horizon closed at the time like a so-called falling stars, swiftly swept to the city and merged into one round, pale fire shining Mass with the same, and according to other information, an iridescent, tail.

This tail, apparently stretching to a length of up to four (1 sazhen = 2.1336 m), was thicker at both ends, upper and lower, with light and fire, rather than in the middle, and curved somewhat undulating, leaving behind it For a few moments a long, greenish-light stream. The direction in which the phenomenon swept through was horizontal-straight, from the southeast to the northwest. …

The clouds, which then closed the airy distance, did not diminish it at all. The bright and wide light that he poured out, accompanied by a noise similar to the rustle of leaves, and at times a slight crackling, was very deafening for the audience, especially women who alone on the street started screaming in fear, while others in the houses were alarmed, That a fire broke out.

A similar phenomenon was reported the same evening in the Solvychegodsky district, adjacent to Ustyug. Consequently, the flammability in the meteor was enough for a considerable space of the path. In Ustyug, he seemed otherwise extinct when flying over the river, but as he walked along the river he saw further. ”

And now we will move almost 150 years ahead and “descend” in the same Great Ustyug in 1987. In the autumn of that year, the fantastic events took place with the dispatcher Tatyana Yadrihinskaya, located near the city of the “Red Island” enterprise.

Her story about this was published in the Vologda newspaper “Krasny Sever” in the issue of August 26, 1990. Here are fragments of this extremely interesting narrative:

“I went from my house, standing on the outskirts of our village, towards the thickets of the Kalina. I approached them … I can see that a “tank” is flying across the sky without a gun barrel. More than a strange “tank” with a sloping dome. His bottom also has a sloping convex shape and everything is covered with some scales, very shiny. The device flew noiselessly, like a glider. He moved in the air at the speed of a helicopter. A couple of minutes later the “tank” disappeared behind the forest.

… I … moved to a forest in the distance – just to the point where the “tank” disappeared behind the forest … I went out to the sandy place where only the pine trees stand. And there … there are strange tents on the sand among the pines, white, huge-enormous, up to half the length of pine trunks. Two of them stood side by side, and the third – a little further away … Decided to go closer … Suddenly, a clear sunny day became gloomy. In the eyes darkened … “.

Waking up, T. Yadrihinskaya found herself lying on the ground. When she got up, she went home, trying to remember what had happened. However, it seemed as though a fog was in her head – she could not remember anything. Memory only returned to her after a few days.

A year has passed. Autumn came again. T. Yadrihinskaya again went after the bilberries, but in another place and another way.

About one in the afternoon “… in a clear blue sky, I noticed something strange around the village of Koromyslovo. Something gray. It was not an airplane or a helicopter! The object flying in the sky quickly approached, descending. He was like two saucers, joined together by the edges. I froze – directly on me the glittering metal round wheel was approaching in the sky. She moved noiselessly. ”

In the cockpit, Tatyana saw two pilots. Heads and shoulders were visible, they were dressed in identical dark blue overalls. The faces were no different from human, but looked unnaturally tanned. One of them was male, the other – female. The device landed about a hundred meters from the woman.

She headed for the aircraft, but suddenly lost consciousness on the way:

“When I woke up, I found myself sitting on the ground at the edge of the field. And the “plates” are no longer on the field. I looked at my watch and was amazed: more than three hours had passed since I lost consciousness. I had a very vague feeling that I was talking to “people” in dark blue overalls. ”

If this event was observed by a single person, one could question the story of the heroine of the narrative. But a few days later it turned out that incredible incidents occurred in the same period with another villager, 13-year-old Svetlana Ipatova.

She told her impressions to the journalist of the large-circulation large-circulation newspaper, where her story was published. On the night of September 30, 1988 (the incident with T. Yadrihinskaya happened the day before), the girl could not sleep for a long time. Suddenly, on the ceiling, she saw the old man’s face, and then she heard a mental suggestion that invited her to come to that place at five o’clock in the afternoon.

After that, the face disappeared, and Svetlana instantly fell asleep.

The next day about five o’clock “… my legs took me … I got out on the field and saw that something glistens ahead. I looked – very low above the ground hangs in the air the most that neither is a natural “flying saucer”! Soon, from the “plate” flew some huge foggy feathers. They flew in my direction, and the mist formed by them surrounded me from all sides. ”

The girl lost consciousness, and when she woke up, it was already completely dark. The “flying saucer” was still hanging over the field and glowing slightly. Near it hung bright points of yellow, red and brown colors. And then suddenly she noticed in the bushes a creature very similar to a man:

“It was only his nose that was somewhat flat, rolled up on a very white face, like a pancake. Dressed in a dark spacesuit, the creature was very tall – about 2.5 meters tall. I look, in the briars of a dog rose stand two more exactly the same creatures. I immediately had a feeling that I had just been very friendly, talked warmly with them. I got up off the ground and, acting like an automaton, walked away from them calmly measured step. I went to my house. ”

A week later, the class where Svetlana Ipatova studied went to the open biology lesson. During the story of the teacher, the girl suddenly ran across the field to a deep ravine. Here is what she said later about this:

“I rushed like an ugly, driven by an unknown force. I reached the forest, and then a hail came: “Stop! We are here”. I looked around. Next to the pine were two in some streamlined spacesuits. For some reason I was very happy to see them. I rushed to greet them, but I heard a warning hail this time: “You can not come! Stop! “.

About what happened then, I will not tell. Those with whom I met on the edge of the forest, forbade me to tell it. “