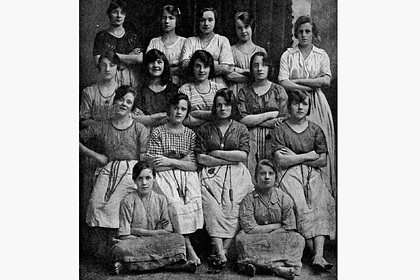 A black and white photograph taken in 1900 confused netizens. According to the Daily Mail, the participants of the Mumsnet forum drew attention to the old photo because of one frightening detail.

The picture was taken in Belfast, the capital of Northern Ireland. It depicts 15 female workers in a linen factory. One of the users suggested guessing what was unusual in the photo.

Commentators began writing that they noticed a lone hand on the shoulder of one of the women. This frightening detail confused the users. “It’s already late enough for us, I was going to go to bed and now I saw it. Scared now, ”one of them wrote.

The strangeness could not be explained by the fact that her colleague stood behind the worker, as the woman crossed her arms behind her back. Many thought that “the hand looks like it came out of thin air.” Some felt that the detail in the photo was evidence of supernatural forces.

Previously, a Reddit user posted two photos from the hospital: one of them was taken immediately after her birth, and the second after the birth of her first child. The network users were surprised that in both cases the obstetrician was the same person and in the second – the father of the child.